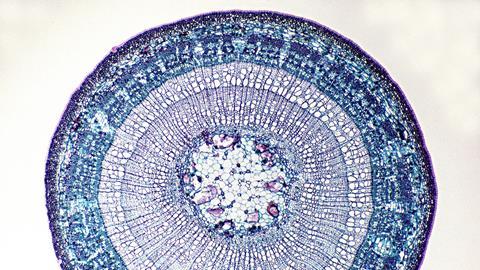 How to dissolve a tree

Biomass is regularly used as fuel, but have we been overlooking this sustainable resource as a source of chemical building blocks?

Ask a biologist and a chemist what the term ‘biomass’ means, and you’ll get two very different answers. A biologist will tell you that biomass is the weight of all living organisms in a given area or ecosystem, but a chemist will tell you that biomass can be a fuel, a bio-friendly polymer or a feedstock for industry. ‘This is because chemists are being a bit lazy with their language,’ jokes Tom Welton of Imperial College London who has a fascination with biologically derived materials and what can be done with them.

‘You often hear scientists talk about generation 1 biomass, which is essentially sugar or starch that can be used as a fuel. Or generation 2 biomass, also called lignocellulosic biomass because of its main components, cellulose and lignin. These are the woody bits of a plant – essentially the stuff you can’t eat. It can be really useful in all kinds of ways,’ he says.

Alongside climate change, plastic waste is one of the biggest challenges to face this generation. Engaging students in the debate around how to tackle these issues is a great way to put their chemistry learning into context. Introducing students to new technologies such as creating new products from biomass will ignite their imagination and demonstrate the possibilities of a future in science. The classroom activities will encourage students to use their critical thinking skills as they consider the advantages and disadvantages of making plastic from plants with the freedom to develop and express their own ideas too.

Using lignocellulosic biomass is not a new idea: ever since man made a fire with wood we’ve been using it as an energy source, and lignocellulosic biomass was also a source of chemical feedstocks. Until the beginning of the 20th century the dry distillation of wood was the main way of producing acetic acid. Nowadays such bulk chemicals are derived from crude oil, but it is not an infinite resource and has a negative environmental impact. So, researchers like Tom have been looking again at what we can do with lignocellulosic biomass, apart from just burning it.

Presently, biomass is mostly used as an energy source, either directly through combustion or converted to fuels: methane, ethanol or biodiesel. The advantages of this are numerous – biomass is (at least in theory) renewable and carbon neutral. It also helps with the growing problem of what to do with the waste we are producing.

Three biopolymers form the majority of woody plants like trees, shrubs and grasses: cellulose, hemicelluloses and lignin. Cellulose makes up the majority of lignocellulosic biomass, and is best known for the manufacture of paper, but making use of the other components is more difficult.

Nature has deliberately created these biopolymers to resist dissolution

‘Lignin is extremely interesting,’ says Tom, ‘because you have this beautiful, aromatic, chemically complex structure that would be hard to create in other ways. Conceptually it’s simple: we’ll use all that nice functionality to create interesting materials and molecules, but technically that turns out to be really difficult.’

One of the big issues working with lignin or cellulose is getting the biopolymer into solution, so it can be separated from the other components of biomass. Nature has deliberately created these biopolymers to resist dissolution, otherwise trees would come down in the briefest shower of rain.

Students can work with a partner or in a small group to decide which of the talking heads they support or oppose. Students can then articulate their own conclusions and support them with reasoned arguments. Download the activity as MS Word or pdf.

Students can work with a partner or in a small group to decide which of the talking heads they support or oppose. Students can then articulate their own conclusions and support them with reasoned arguments.

Students can use the excerpts from this article to support their answer to an ‘evaluate’ question. They can plan their answer by extracting information from the text before using a structure strip to scaffold their long written answer.

Download the Talking heads and Scaffolded evaluation activities and an article excerpts document from the Education in Chemistry website: rsc.li/3nN7GWp

‘The problem with both materials is they are really hard to dissolve. And hard to get back out of solution without doing a transformation on them,’ Tom explains. ‘But I’m really interested in solvents and getting things to dissolve, and I liked the challenge.’

Eventually Tom’s group hit upon the idea of using ionic liquids – salts that are liquid at or near room temperature. ‘You can dissolve cellulose in these, filter it, then precipitate it out by adding water without any chemical transformation. You can do the same thing with lignin,’ he says.

But what to do then? ‘You have this amazing structure, and you start to think ‘well, what can I do with that?’ We tried some gentle decomposition on lignin in solution, with the aim of getting out some beautiful molecules, and I think the smallest mixture we got was about fifty compounds. That leaves you with a horrendous separation problem.’

‘Right now society gets our carbon-based materials from oil. But in a world where that no longer happens, where do we get our carbon from?’

So Tom had a change of tack and says he’s not aiming to make small molecules but seeing what he can do with lignin, cellulose and blends of the two materials. And he’s not just looking for new routes to existing plastics: ‘we want new materials to be bio-sourced, biodegradable and carbon-neutral. Right now society gets our carbon-based materials from oil. But in a world where that no longer happens, where do we get our carbon from? It has to be biomass.

‘So far we’ve made fibres and we’re interested in using cellulose as a precursor to carbon fibre. The problem is that there’s not a lot of carbon in cellulose, but if we could make a composite of (the more carbon rich) lignin with cellulose then that might be a way to up carbon content,’ he says.

Tom is also interested in using cellulose–lignin composites to replace the microplastics added to shampoo and cosmetics. ‘If we could get rid of those (they have been banned by law) and replace them with something like cellulose that would be amazing. You can just wash that into the sea with no concern – it will biodegrade.’ 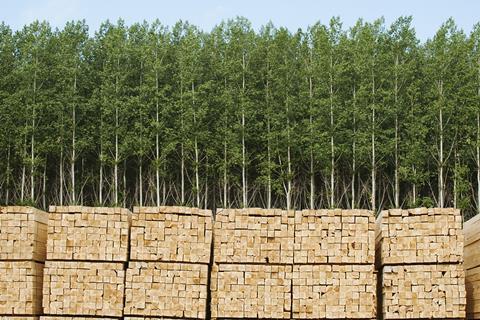 Someone who has also encountered the problem of separation when trying to break down lignocellulosic biomass is Herbert Sixta of Aalto University in Finland. He also uses ionic liquids to get cellulose, hemicellulose and lignin into solution but then performs transformations on them, producing useful chemical building blocks. ‘At the moment, when cellulose is extracted from chipped wood for things like paper manufacture, the lignin and hemicelluloses are dissolved in water. That’s not easy and it’s even more difficult to get them out of solution again so, typically, this waste solution is just concentrated down by evaporation and sold as an energy source to be burned. What we would like to do is to be able to use all of the material usefully.’

In contrast to Tom’s gentle precipitation methods, Herbert’s processes alter the structure of the cellulose, hemicellulose and lignin though processes like hydrolysis and oxidation to yield small molecules that are useful in the chemical industry. ‘We can convert the sugars from the biopolymers to furans, and in the case of xylose transform this to furfuryl alcohol – a useful intermediate that can be used as a solvent and converted to resins and polymers,’ Herbert explains.

He continues: ‘The aim is to replace crude oil with biomass but that will require a very efficient and selective way to fractionate the compounds we are making. It’s easy with crude oil: you remove the most volatile compounds first, then the next most volatile and so on. We want to achieve the same thing in a biorefinery, but it’s more difficult because we are working in aqueous solution and unwanted side reactions are happening all the time.’

So Herbert too turned to ionic liquids, to reduce side reactions and improve yields. ‘Now we can get cellulose in solution, which lets us form fibres. At the same time we are figuring out new ways to use hemicelluloses and lignin.

‘The hemicelluloses transform into sugars like xylose, which can be converted to xylitol – an alcohol that’s often used as a non-calorific sweetener. We can make furans too, which can be used in the manufacture of Lycra.’

Herbert is still working on ways to transform lignin. ‘Lignin is a very abundant source of aromatic rings, which are not easy to get from crude oil,’ he says. ‘The challenge is to degrade it just enough so you end up with monoaromatics. We’d love to get things like phenols for organic synthesis.’

Naturally sourced, potentially biodegradable materials from sustainable sources. It seems that biomass could be the environmental silver bullet that humanity has been waiting for, right? Well, there are two sides to every story.

Early biomass fuels got a slamming from environmentalists. Huge swaths of rainforest were cleared for plantations of single species, like sugar, devastating the biodiversity in the process. This is something that both Herbert and Tom are adamant cannot happen again if we are to rely on biomass in the future. 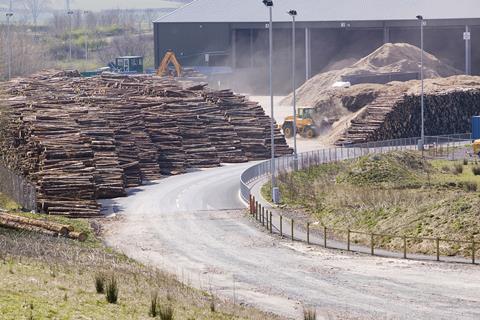 Currently biomass is mostly used as an energy source, for example in biofuel power stations, but there are many more possibilities

‘It would be self-defeating,’ Tom says. ‘But there are sources of lignocellulosic biomass that don’t have to be grown like that. When we plant forests, we thin out the weaker trees to let the stronger ones grow and that’s all excellent biomass. And we have the recycling capacity in place to take old wood and cotton and use that too.’

Herbert has similar thoughts: ‘Consider a piece of wood. First, we use it as furniture and when that furniture has outlived its usefulness we can use that biomass as a polymer for things like fibres in textiles – maybe several times over. After that we can make small molecules from it like sugars and furans. That’s a lot to get from a single piece of wood.’

‘When we plant forests, we thin out the weaker trees to let the stronger ones grow and that’s all excellent biomass’

On a more immediate timeframe, Tom’s group has been experimenting with cellulose and lignin blends to make food packaging, but the current Covid-19 restrictions have caused a momentary halt to proceedings. ‘Traditionally, coffee cups are lined with plastic, and that’s what makes them non-biodegradable. But lignin is also hydrophobic, it’s naturally sourced from biomass and biodegradable,’ he says.

So, one of Tom’s students made a film of 10 percent lignin in cellulose that could have just the right properties to help solve the single-use packaging problem. But we’ll have to wait and see. ‘That sample is currently sitting in a locked cupboard in a department that’s not yet reopened because of social distancing guidelines,’ Tom says. ‘It’s very frustrating!’

But patience could pay off, and chemists could make biomass into much more than fuel. As a potential replacement for crude oil, and the place where humanity could get all of its carbon-based chemicals and materials, the future for biomass is of colossal importance.