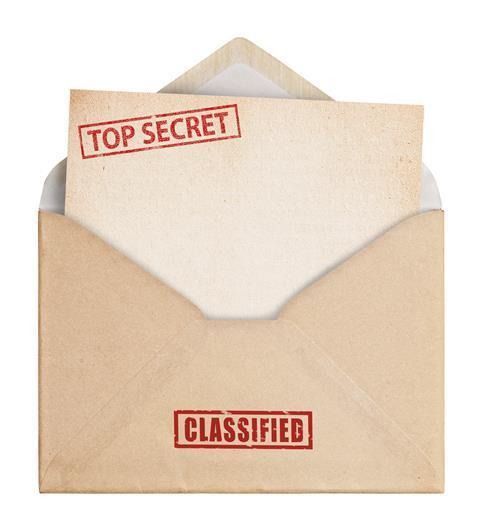 In National Treasure Benjamin Gates (Nicholas Cage) is the latest in a long line of treasure hunters in his family. They have all been searching for a ‘mountain of treasure’ apparently hidden 100s of years ago by the founding fathers of the USA. Early on in the film Ben’s troubles really start when he learns that the key information he seeks is written in invisible ink on the back of what is arguably the USA’s most important historical document – the Declaration of Independence!

In a daring and exciting mission Gates and his collaborators steal the priceless manuscript but with the police hot on their trail they only have a short time to reveal and decode any hidden message. Using lemon juice they tentatively start testing the manuscript but are crestfallen when nothing immediately appears. Then one of the team suggests that heat might be required and so, using their hot breath they breathe on the lemon-soaked paper and the invisible messages start to appear!

What is eventually revealed is a list of numbers in sets of three (e.g. 11-22-33) known as Ottendorf ciphers. Each set of three will lead them, one letter at a time, to spell out the secret code or message. In this example the three numbers could correspond to the first letter of the 33rd word in the 22nd paragraph of an 11th manuscript.

Ideally, invisible inks need to dry transparent, leave no tide mark or stain and also not wrinkle the paper. An old parchment is probably better at covering up these tale-tale signs than a modern flat piece of bright white paper, so it’s not improbable that an invisible message may have gone unnoticed. Many ‘invisible’ inks can be made from simple or common chemicals and in emergencies even bodily fluids such as saliva can be used. Dried writing from bodily fluids can be made visible again under a UV light but of course these were not available way back in the 1800’s.

Perhaps the simplest ‘invisible ink’ is lemon juice or vinegar. To reveal the writing all you need to do is carefully heat the manuscript. Heat oxidises the organic acid making it brown and therefore visible. In the film they initially breathed onto it but this would not be enough heat; later they used a hair dryer which would be better. Another option is to use a dilute solution of Cobalt chloride which is slightly red and if written on slightly pink paper is quite invisible. When the paper is warmed it shows up as a brilliant blue colour. However if it was breathed on the moisture would make it disappear again.

In the film they brush lemon juice all over the manuscript using it as they would a ‘developer’ rather than an ink. Some invisible inks made from indicators can be made visible using acids or bases. Phenolphthalein ‘ink’ for example, goes bright pink when exposed to ammonia (alkali) fumes. However if they are using the lemon juice as an acid developer with an indicator ink why then do they also need to heat it up, which would have oxidised the lemon juice covering up all the writing. They seem to mix-up different methods and would probably just have ruined the unique historical treasure!