The dye diffusion thermal transfer method is used for printing digital photos on plastics, and for direct printing on PVC cards

The growth of plastics in our lives has been mirrored by a desire to decorate this material, whether for simple aesthetics, to incorporate brand logos, or for security reasons. However, possibly the main reason for wanting to print on plastics lies in the emergence of digital photography. So how's it done?

For the past two decades, the dye diffusion thermal transfer (D2T2) method has been used to print photographic quality images onto plastic substrates. Images are produced using heat which promotes the diffusion of dyes from a dye donor ribbon directly into the plastic substrate. The dyes can penetrate into several plastics, including polyesters and polyvinylchloride (PVC).

The dye donor ribbon (see Fig 1) consists of a thin layer of polyethylene terephthalate (PET) coated on one side with repeating panels of the three dye formulations - yellow, magenta and cyan - mixed in a solvent. The solvent is removed during the coating process, leaving a kinetically stable yet thermo-dynamically unstable coating of dye in a polymer binder, such as PVAA (poly(vinyl aceto acetal-co-vinyl alcohol-co-vinyl acetate, 1).

This polymer binder has good affinity for the dye molecules and a glass transition temperature (Tg) in the region of 80-120ºC, which gives good colour delivery during printing and stability on storage. (The Tg of a polymer is the point at which the polymer chains have sufficient energy to move freely and become more liquid-like.)

On the opposite side of the ribbon is another polymer coating, the back-coat. This is typically a highly cross-linked urethane-acrylate-based polymer, with added lubricants and fillers. The back-coat aids the transfer of the ribbon across the thermal print head during the printing process.

There are many commercially available 'diffusion' dyes, but for use in D2T2 printing they should have a high melting point to reduce the risk of plasticisation of the dye-sheet polymer binder; high optical strength to give good colour intensity at low concentrations; and good affinity/solubility for the binder polymers. They should also be stable to light to reduce the possibility of fading. Examples of suitable yellow, magenta and cyan dyes are (2), (3) and (4) respectively.

The 'receiver paper' or plastic substrate is made up of special polymer coatings which receive the dyes from the ribbon during thermal transfer and can separate from the dye ribbon after transfer is complete. On the one hand the receiver coating must allow the dye molecules to move into the polymer matrix at certain temperatures (ie the temperature at the ribbon/receiver interface during printing) but, on the other hand, act as a barrier to further movement at lower temperatures.

To achieve a balance between these two opposing properties, the receiver layer is made up of a cross-linked polymer. However, too high a level of cross-linking will result in low optical densities when printing, and too low a level of cross-linking may result in dye migration after printing, ie the image will lose definition over time as the dyes diffuse laterally through the polymer matrix. The cross-linking of the receiver polymer also reduces the release force from the dye sheet when printing. This, in combination with a release agent, prevents the dye-sheet and the receiver layer from sticking during the high temperature printing process.

Other layers within this 'paper' can include a whitening layer (normally consisting of a mixture of polyurethanes, polyacrylics and polyvinyl alcohols plus titanium dioxide) and a voided polypropylene layer to give some thermal insulation. A cross section of a typical receiver paper is shown in Fig 2. 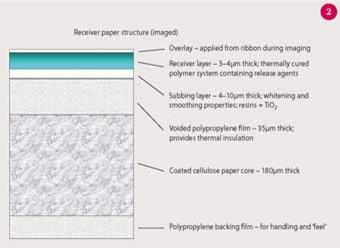 Inside a D2T2 printer a microprocessor breaks down the digital image into the three component colours - yellow, magenta and cyan. The thermal print head comprises numerous pixels, which are in contact with the dye donor ribbon during printing. The thermally stable, highly lubricated coating (back-coat) on the dye ribbon can slide over the heated pixels without sticking or damaging the PET ribbon. As the back-coat is heated the dyes contained in the coatings on the opposite side of the ribbon leave the coating and diffuse into the receiver paper, which is in contact with the ribbon during the heating process. The printing process is shown in Fig 3. 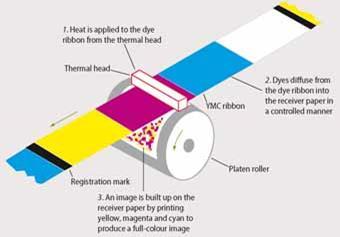 The colours needed to build up the full-colour image are printed separately in the order of yellow, magenta then cyan. After each of the three coloured dyes has been transferred, the dye ribbon and receiver paper separate from each other, leaving the spent dye ribbon and the imaged receiver sheet. When all three colours have been printed a full-colour image is produced. The image can then be protected by thermally transferring another polymer on top of the printed image.

D2T2 printing is not limited to the production of digital photographs on plastics but can also be used to print directly onto PVC cards - ID cards, plastic driving licences, visitors' passes, loyalty cards etc. However, other methods have been developed specifically for different applications, such as security features. These include: laser engraving; wax thermal transfer; and indirect D2T2 transfer.

This involves the controlled burning of a plastic substrate using a laser. A monochrome image of the charred and non-charred areas of plastic is produced. Since the plastic card has been physically altered and the image cannot be easily removed, this provides a secure feature within the card. Plastics such as polycarbonates are most suited to this method because sharp, dark images can be produced with the laser. The downside of this method is that polymers best suited for laser engraving are often not receptive to the dye diffusion process so a combination of a laser engraved image and a full-colour image is difficult to achieve.

This process is used to transfer a single colour (typically black) onto a substrate, for example to incorporate barcodes and text. The whole coloured layer is transferred from the donor ribbon to the substrate, and there is no controlled diffusion of dyes from one polymer matrix into another. Thus wax thermal transfer does not offer the continuous tone images of D2T2 nor the high security of a burned image within the card offered by laser engraving. As such it is considered to be a low-tech printing method. However, wax transfer ribbons are cheap and require low print energy, and are therefore used widely to print labels.

High-quality images can be produced on a range of different substrates, and surface irregularities on the substrate are not an issue. In contrast, direct D2T2 printing requires flat, regular surfaces because the thermal print head, dye donor ribbon and receiver substrate must all be in contact during printing. However, in the indirect method, the image is transferred into a polymer layer on another ribbon and then this entire polymer layer is transferred onto the receiver substrate. This allows full-colour images to be transferred onto irregular cards such as those containing chips. And because the dyes diffuse into the intermediate material there is no need for the final substrate to be receptive to the dyes. This can be important if a combination of colour images and laser engraved images are required on the final product because currently the best materials for laser engraving are not receptive to standard D2T2 dyes. Indirect transfer does have its disadvantages, however. The use of the intermediate material and transfer step makes this process more expensive and slower than direct D2T2, both of which restrict its use.

While printing a photographic image onto a card is one way of adding a security feature, there are other ways of doing this. For example, the image can be printed with an ultraviolet (uv) fluorescent dye that cannot be seen under visible light, but is visible under uv light.

The use of fluorescent images as security features can be improved by using three different uv fluorescing dyes. If red, green and blue fluorescent dyes are used to print the inverse of an image in the same manner as the yellow, magenta and cyan dyes are used to print a colour image, then a full-colour fluorescent image can be produced. This can be used to produce easily identifiable ID images that are only visible under uv light. An example of how this can be used as a security feature is shown in Fig 4. The cards on the left are viewed under visible light whereas the cards on the right are viewed under a uv light. Under visible light both cards look genuine. However, when viewed under uv light the top card is seen to be a fake whereas the bottom card is genuine. 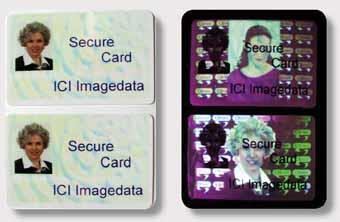 Another method uses optically variable pigments (OVP). These pigments change colour when viewed at different angles, see Fig 5. They can be incorporated into a polymer layer and a mass transfer image can be printed. A mass transfer image is one produced when both the polymer and pigment transfer onto the substrate when heated (as opposed to dyes diffusing out of the polymer matrix and into the receiver material).

Mass transfer images are of much lower quality than dye diffusion images (dot pattern as opposed to continuous tone), though they do allow the use of dyes and pigments that would not otherwise transfer from the ribbon to the substrate ie dyes/pigments that will not diffuse out of one polymer matrix into another.

Recently card manufacturers have been moving away from using printed security features on cards to non-visual techniques, such as RFID (radio frequency identification) and chip and pin. The future of card security features is more likely to be what's in the card as opposed to what's on it.

Digital photography and printing on cards are now both well-established industries producing millions of images a year. However, the ability to print on plastics doesn't end there. There are some novel printing techniques emerging from this industry, including the ability to print photographic images onto three dimensional objects.

One method, developed by ICI Imagedata, uses a combination of heat and vacuum to transfer a pre-printed image. A recyclable polyester sheet is coated with specially designed polymer coatings that are receptive to ink-jet inks containing sublimable colourants. This sheet is pre-printed with an image by using aqueous ink-jet technology.

The pre-printed sheet and object to be decorated are then placed in an adapted vacuum forming press and a combination of heat and vacuum is applied to mould the pre-printed film around the object. Heat is then applied and the colourants within the sheet diffuse into the three dimensional object. The film can then be removed, leaving an object with a perfect image wrapped around every contour. Any digital image, such as a full-colour design or photographic image, can be transferred onto highly complex shapes with excellent image quality. The image can also be printed around 90º angles.

Some materials, such as PVC and a range of polyesters, can be directly decorated by this method, whereas, others such as metal and glass require a receptive coating to be applied first to the object. The receptive coating is sprayed onto the three dimensional object and is thermally cured, after which it can accept the dyes from the pre-printed donor sheet during the transfer process. This method can be used to decorate plastics, metals, wood, ceramic, stone and composite materials and is being exploited in consumer electronics, sports goods, and interior and exterior trims.

With novel imaging techniques emerging and constant improvements in the existing technology printing on plastics will hopefully remain an active area of research and innovation for many years to come.