Terpenes: not just for Christmas

The chemicals that give Christmas trees their pine fresh smell could be at the centre of a chemical revolution, as Josh Howgego explains 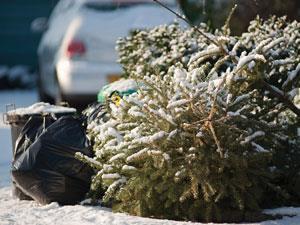 A week or so after the big day and all the Christmas trees have been evicted from our homes. For a couple of weeks they had pride of place in lounges and halls – softly lit with strings of twinkling lights – but now they are outside slumped against wheelie bins. There is one aspect of these trees, however, that we shouldn’t dismiss so quickly.

Terpenes are the chemicals that give Christmas trees their inviting pine scent. It therefore makes sense that they are used as fragrances. Pinene, for example, smells like woodland, while limonene smells of lemon. They have other uses too; oil of turpentine, a mixture of several different terpene chemicals distilled from pine sap, is traditionally used in oil painting. Some terpenes and their derivatives are even used as medicines.

Despite their humble origins, terpenes could soon find widespread use as a replacement for crude oil. Much of our modern way of life – from fuels, to plastics, to deodorants – is built using chemicals derived from oil. Yet oil has several big drawbacks: it’s expensive, dirty and scarce. In an effort to find a replacement for oil, chemists have been turning to plants. There are substances in plants that can – if manipulated skilfully enough – be transformed into the same platform chemicals that come from oil.

Platform chemicals are the fairly simple and cheap chemicals used by the chemical industry as jumping-off points from which to build all manner of more complicated chemicals. Over the past decade, chemists have been trying to perfect the process of transforming plant derived chemicals – mostly fats and oils, sugars and lignocellulose (the woody part of plants) – into the platforms they need. But while biomass can potentially provide an enormous and renewable reservoir of these chemicals, there is one problem: oxygen. Unlike the hydrocarbons in crude oil, plant oils, sugars and lignocellulose all contain some oxygen atoms (and in some cases a fine sprinkling of other heteroatoms too). In some senses this is useful because it means it might be easier and less energy intensive to make platform chemicals that contain heteroatoms.1 But none of the existing large scale chemical infrastructure is designed to cope with highly oxygenated species. In short, we haven’t yet perfected the art of turning sugars into useful chemicals.

How can terpenes help? The fantastic thing about them, explains Adrian Higson, a consultant at the NNFCC, a bioeconomy consultancy in York, UK, is that they are hydrocarbons. Because they contain only hydrogen and carbon atoms, they are very chemically similar to the molecules in crude oil. ‘We are in familiar territory with these molecules,’ he says. ‘With terpenes, industry can use the chemistry set they’ve had for decades in essentially the same way.’ That’s important, he explains, because the chemical industry won’t switch to using renewable resources until it sees a good reason. At the moment it still looks like many plant based materials are too difficult and therefore too expensive to make business sense.

‘Considering their latent advantages, it’s perhaps surprising that no one has yet gone about systematically exploring the potential of terpenes before,’ says Matt Davidson, the director of the Centre for Sustainable Chemical Technologies at the University of Bath, UK. Matt is hoping to change all that. He is leading a new five year project, collaborating with 19 other research chemists, which aims to scope out how best terpenes could be exploited as a renewable resource.

There is a roadblock, however. Those abandoned Christmas trees on our frosty pavements don’t hold enough terpenes to satisfy the level of demand that could eventually come from the chemical industry. The concentration of terpenes in trees is fairly low. Two tonnes of wood chippings would only produce approximately 4 kg – just a couple of buckets – of crude turpentine. Only 330,000 tonnes of pinene are produced each year, whereas other plant based feedstocks have much higher yields. For example, about 1.1 million tonnes of lignin goes on the market each year across the world. 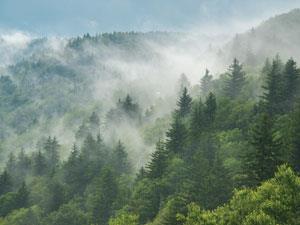 Matt has a plan to get around this barrier. One aspect of his project will see his team working to coax bacteria into producing terpenes by engineering them with the required genes. This would mean terpenes could be produced sustainably and in large quantities – a little like the way yeast is used to make large volumes of beer in breweries.

There is good reason to think Matt’s dream of terpene producing bacterial facilities could come true. In fact, to some extent it’s already happening. Scientists from the US have succeeded in genetically modifying bacteria so they are able to metabolise sugar and turn it into terpenes. This first happened in 2003, when scientists led by Jay Keasling of the University of California, Berkeley, showed that by implanting a series of terpene manufacturing genes into Escherichia coli it was possible to turn the bacteria into factories producing amorphadiene, a close precursor to the valuable antimalarial drug artemisinin.2

Matt’s team think they will be able to produce several other types of terpene using the same sort of genetic engineering principles. That’s because terpenes are all built out of the same basic building blocks: dimethylallyl pyrophosphate and isopentyl pyrophosphate. These react together in an addition–elimination sequence to produce the molecule farnesene. A decade ago Jay founded the company Amyris, which now produces farnesene on an industrial scale using synthetic biology. This key intermediate can then go on to react in several ways to produce a profusion of different compounds (see Terrific terpenes). So it’s not just speciality chemicals such as artemisinin that can be accessed from terpenes but also platform chemicals.

Jay has also showed that by tweaking just a few of the genetic instructions, the microorganism could spit out a slightly more complex terpene called α-bisabolene. This molecule can be chemically reduced to a completely hydrogenated analogue called bisabolane, and he claims that this molecule would make a good biosynthetic alternative to diesel fuel. It is 15 carbons long, a similar size to the average molecule in diesel, and it has favourably comparable properties, including viscosity, density and boiling point.3 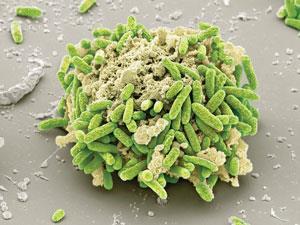 Implanting a series of terpene-manufacturing genes into E.coli has been shown to produce valuable antimalarial drugs

The Amyris process uses engineered yeast but Matt says his team will be looking to use different microbes for their process. E. coli and yeast are both used repeatedly by synthetic biologists because they are so well studied and therefore easy to work with. But both organisms must feed on sugar and Matt says this isn’t ultimately the best fuel for biorefineries as it restricts where in the world the facility can be located. ‘I would be happy running a process that depends on sugar in Brazil, because it’s cheap there – it would make economic sense,’ says Matt. ‘But I couldn’t imagine doing that in western Europe. We don’t really grow enough sugar here so it just wouldn’t work.’ Matt wants his project to come up with ways of using terpenes that are truly sustainable and that will work irrespective of geographical location. The team are currently looking at using heat loving bacterial strains (extremophiles) to produce their terpenes. The main task will be to find ways of getting these species to thrive on a diet of cheap and widely available cellulosic materials while producing useful quantities of terpenes at the same time.

Turpentine, a mixture of different terpenes, was traditionally collected from pine trees by cutting V-shaped slashes into the trees’ trunks. The tree would respond by secreting oily residues to protect the wound. These would be collected in buckets and distilled to produce turpentine. Today most turpentine is collected by pulping wood chip. 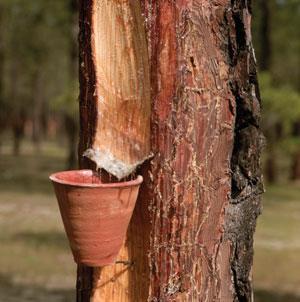 These days many terpenes are used as fragrances in cleaning products. If you dive under your sink and pluck out a bottle of disinfectant the chances are you’ll see camphor, linalool and geraniol in the ingredients list. These are terpenoids – terpenes that have been derivatised with small chemical changes, like the addition of a hydroxyl group.

Terpenes are produced by the reaction of two geometric isomers: isopentyl pyrophosphate and dimethylallyl pyrophosphate. These undergo an addition–elimination sequence to produce farnesene and from there they can go on to react in a multitude of ways. Many important molecules are derived from this simple starting reaction. Some hormones, including testosterone and cortisol, are synthesised in humans during the metabolism of complex terpenes. And there are several drugs that are built from a terpene scaffold including taxol and irofulven, two important anticancer compounds.

Creating a sustainable feedstock of terpenes is only part of the challenge confronting Matt and his collaborators. They also have to figure out the best ways of converting the molecules into useful platform chemicals. And although the terpenes are highly reminiscent of the long chain hydrocarbons contained in crude oil, they are not exactly the same.

While there is much to be done and many synthetic routes to consider there are also attractive rewards for Matt’s team if they rise to the challenge. Their success could have a major impact on the chemical industry. Take for example terephthalic acid: this molecule is one of the monomers used to produce poly(ethylene terephthalate) (PET), the material that most clear plastic bottles are made from. The amount of PET in use worldwide is astronomical. Around 50 million tonnes of PET is produced annually, with much of this being used to make drinks bottles.

PET is made by polymerising ethane-1,2-diol and terephthalic acid. And although there are plant based sources of ethane-1,2-diol, Adrian explains that no one has yet found an economical method of producing terephthalic acid from biological sources. This means that only part of the material that makes plastic bottles is from a renewable source. Drinks company Coca-Cola, for example, say on their website that only up to 22.5% of their plastic bottle materials come from plant based materials. Coca-Cola said in April 2013 that they have made 14 billion of these partially plant derived bottles since 2009. So if plastic bottle manufacturers could find a way to make the other 77.5% of the bottle from renewable sources it would be big news.

Terephthalic acid is just one of the platform chemicals Matt has in his sights. ‘One of the attractive things about terpenes is that they have six-membered carbon rings staring us in the face,’ says Matt. From the six-membered rings in molecules such as limonene or a-bisabolene it’s only a small conceptual leap to aromatic rings, an important structural component of many platform chemicals. Matt is hoping that other aromatic compounds such as pyridine, an important solvent, and 2-methylaniline, which is used in dye and glue production, can also be synthesised from terpenes. Some other renewable feedstocks such as lignin do contain aromatic functional groups – but these are joined together in lengthy, insoluble strings of polymer that have proved much more difficult to process than chemists originally thought. 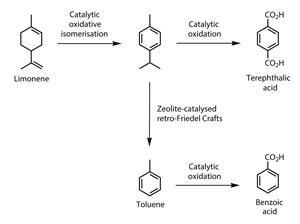 The team's proposed route from limonene to terephthalic acid, and routes to other important platform chemicals

So how long do we have to wait until the terpene revolution? ‘Our project has been funded for five years initially,’ says Matt. ‘We’re hoping to make as much progress as we can by then – that means we’ll be looking largely at existing catalysts and technologies, not starting from scratch.’ In fact a large portion of the team’s work will involve bringing people together – from industry and different scientific disciplines – to understand how the process of converting large amounts of terpenes into platforms can work in a sustainable way. ‘It’s about identifying bottlenecks in processes and applying the appropriate expertise to remove them,’ says Matt. If all goes well the Christmassy smell of pine trees won’t just be a temporary festive fixture. It will also be hovering over the industrial plants that will drive chemistry’s future.

Josh Howgego is a science writer based in London, UK