Tree of life – life, the universe and everything 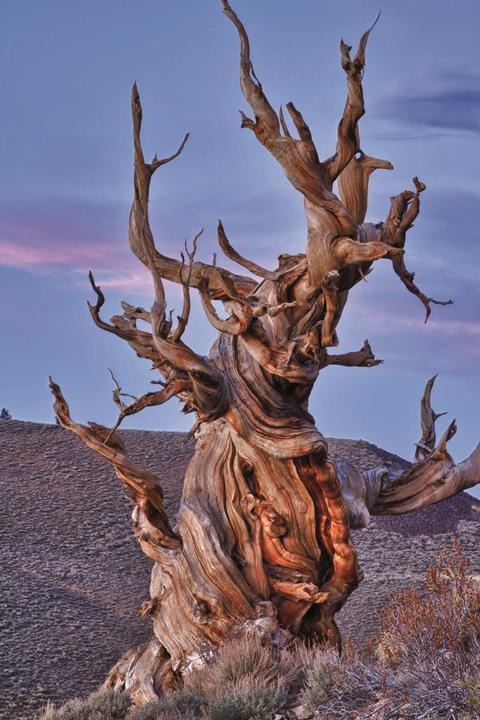 A bristlecone pine tree in the White Mountains, California, US. One of the oldest living trees in the world

Tree of Life is the haunting story of life in 1950’s Texas and a family’s struggle to come to terms with the death of a loved one. However, embedded within the film are also a series of short, yet stunningly beautiful, visual explorations of crucial events in the world’s evolution. Ultimately the film is about birth, growth, death, religion and evolution.

In these ‘visions’ we go back thousands of millions of years to witness the formation of stars. We see tiny planets come together to form the Earth. Simple molecules develop, leading to the oceans and more complex structures. Primitive cells emerge and we see something akin to bacterial division taking place. Sea creatures move onto land, dinosaurs appear, an asteroid falls to Earth…

The chemistry of life

Perhaps the most important of all the epochs is when life first emerged from the early seas – sometimes called the primordial ‘soup’. What do we know about the chemistry of this stage?

The first ‘life’ might have been very different from today’s simplest cell or bacteria. Current thinking is that once a suitably complex molecule formed – one that could copy and replicate itself – then essentially life had also started.1

In 1952 Stanley Miller and Harold Urey, scientists at the University of Chicago, US, wanted to investigate how the basic building blocks of complex biological molecules might have been created on the early Earth. They set up a sterile glassware apparatus and added water, methane, ammonia and hydrogen to represent the Earth’s early atmosphere (it is thought that an oxygen rich atmosphere appeared much later). To simulate lightning in the primitive Earth’s atmosphere an electrical spark was continuously maintained.

What they found surprised them. Within a day the flask had turned pink. In one week 10% of the carbon had been converted to organic compounds. Even in this short time quite large and complex molecules had been created, including sugars, lipids and simple amino acids such as glycine. In 2007 a box of some of the original samples were rediscovered. Modern analysis has revealed an even greater range of structures to be present, including many amino acids.

From the starting materials there are many potential reactions. For example, this is one route to the formation of glycine:

The film does not go into these technical details. However, what we see, beautifully presented in these haunting scenes, is an intriguing and unique Hollywood account of Earth’s evolution.

The oldest living tree in the world is Methuselah, a bristlecone pine tree in the White Mountains, California, US. In 1957 scientists measured it to be 4600 years old.