Knowledge of topics such as isotopes, hydrocarbons and spectroscopy is integral to the study of climate change, oceans, the cosmos, archaeology – and so much more

‘If each science subject is a tier on a cake, then geology represents a slice through all of them,’ says Christopher Pearce, principal marine geoscientist at the National Oceanography Centre in Southampton.

A sound knowledge of chemistry is key to studying geology and earth science, and geochemistry itself is a major branch of geology that forms a part of all degrees accredited by The Geological Society of London. The subject has far-reaching applications, from helping to find ways to mitigate the impacts of climate change to understanding the physical structure of Mars and the origins of RNA.

‘It was my chemistry teacher who first motivated me to study geology,’ recalls Christopher. His teacher had formerly had a job mapping the locations of mineral deposits. ‘His laboratory was full of different rocks and mineral specimens from all over the world that were as exciting and varied as some of the stories he had to tell.’

A worksheet and answers focusing on how knowledge of isotopes, radioactive decay, mass spectrometry and time of flight calculations are key to identifying the origin, age and composition of rocks (as MS Word or pdf).

Share this worksheet, article and related resources with your students to show them how their current studies are relevant to real-world careers.

Besides the directly relevant earth science curriculum (the rock cycle, formation and extraction of Earth’s resources, etc), school students get a further flavour of geochemistry in both single chemistry and combined science with topics such as isotopes. For example, they learn that isotopes of elements have the same atomic number but different masses, which can be measured using mass spectrometry. The ‘relative abundance’ of isotopes can differ in meteorites or in areas with unusual volcanic activity.

Geochemists study both stable isotopes and radiogenic ones, which form when radioactive nuclei decay. For example, potassium–argon dating is used to date some rocks based on the radioactive decay of an isotope of potassium (40K) into argon (40Ar). As a noble gas, argon does not bind with other atoms in the rock’s crystal lattice structure and instead remains trapped within the spaces. However, it is able to escape molten rock when the crystals melt, then starts to accumulate when the rock recrystallises. The method can therefore tell researchers how long it has been since a rock sample has solidified. Mass spectrometry can detect the amount of argon gas released from a sample.

Potassium–argon dating was used by the Mars Curiosity rover to date a rock sample on the red planet back in 2013. Such radiogenic isotopes can also help researchers to calculate how old the Earth and the Moon are, while stable isotopes can be used to study how the Moon formed in relation to the Earth, explains Chelsea Sutcliffe, a research associate at the University of Toronto in Canada.

Students may learn that rock samples collected on the Moon during the Apollo missions have a remarkably similar isotopic composition to those on Earth. A 2020 US study revealed that different lunar rocks actually have subtle differences in oxygen isotope compositions. The finding potentially alters theories about how the moon formed when a body called Theia smashed into Earth with great force. The results imply that the oxygen isotope compositions of Theia and Earth were not completely homogenised by the impact, suggesting Theia could have formed farther from the sun than Earth did.

‘We wouldn’t know even a third of what we know about our solar system and the evolution of the Earth and its neighbouring planets and moons if it wasn’t for chemistry,’ says Chelsea. ‘So it’s the marriage of these two disciplines [geology and chemistry] that really fascinates me.’ 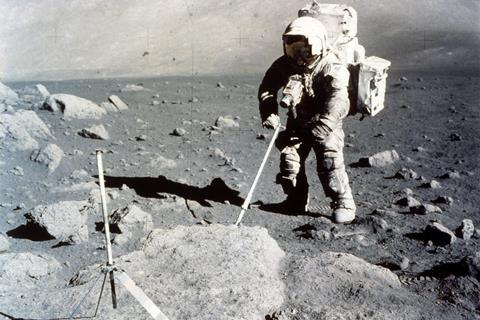 The first geologist to walk on the Moon: US astronaut and geologist Harrison Schmitt working the scoop on the lunar surface during the Apollo 17 mission in 1972

Chelsea loved the geochemistry courses she took as part of her undergraduate degree in earth sciences. She went on to do a Masters project hunting for suitable iron meteorites to age-date using radiogenic isotopes based on their concentrations of lead and thallium.

Her PhD was on ‘cosmochemistry’, using non-traditional stable strontium isotopes in the Earth–Moon system. Non-traditional isotopes are a very recent field of isotope geochemistry, made possible by advances in mass spectrometry which now allow scientists to measure very precise and small differences in the ratios between isotopes, she explains. Her current research is also on isotope geochemistry, age-dating rocks and minerals to understand when and how they formed.

‘Chemistry is incredibly useful to my work,’ says Chelsea. It includes understanding how radioactive decay works, as well as digesting difficult materials such as iron meteorites and silicate rocks. ‘I would describe my work as an isotope geochemist to be predominantly chemistry-based, with a smattering of rocks,’ she says.

Learn about some more real-life geologists, what they do and how they got there:

The team at CASP uses geochemistry techniques, such as isotopic analysis, to analyse sandstone reservoirs – which can store groundwater, carbon dioxide or hydrocarbons such as petroleum. They examine elements hidden in rock fragments and minerals to work out where they may have come from and then work back to predict where similar reservoirs might be found, explains Simon Passey, geoscience data coordinator at CASP.

Simon was part of an international team that used sedimentary data to ‘reconstruct’ the climate from the end of the Paleocene and the early Eocene, 55–57 million years ago.

The team is using a new method called clumped isotope thermometry to test minerals in soil samples taken from former swamps. In the Paleocene and the Eocene, the atmosphere contained far higher levels of the greenhouse gas carbon dioxide and the findings revealed that the planet was hotter and wetter than it is today. The climate from that era gives an indication of how today’s climate might develop.

‘Geology is often assumed to be a study of what has happened to the Earth in the past. However, we are increasingly applying that understanding to inform what the ongoing consequences of climate change might be and to find new ways of mitigating those impacts,’ says Christopher.

At the National Oceanography Centre, his current research combines his interest in understanding how Earth systems operate and are influenced by climate change with his experience conducting chemical and isotopic analysis of water and rock samples from all over the world.

‘Excitingly, this research is also opening up new opportunities for helping to mitigate the future impacts of global warming by testing strategies for monitoring offshore carbon capture and storage and by investigating the potential of enhanced rock weathering as a mechanism for removing excess atmospheric carbon dioxide,’ he says. ‘Geochemistry has a major role to play in this, across the full depth and breadth of the planet – and beyond, for those who have been watching the latest Nasa mission to Mars – making it an extremely exciting and fulfilling subject to study.’