A model for success

Secure understanding of scientific vocabulary with the Frayer model 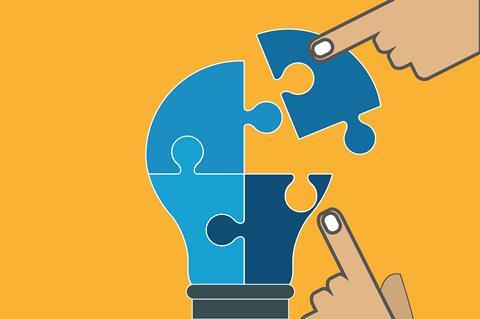 Help your students to fit all the pieces together

I doubt there is a teacher who has introduced a key term, taught the definition and then felt that their students fully understand it. Instead, students tend to be able to recall the term, use it in a sentence and answer the odd question about it. But when it comes to giving an example, it’s evident that they haven’t fully understood.

Since I’ve started using the Frayer model in class, my students’ understanding of important terminology has improved vastly. Laying scientific language foundations is crucial not only for 14–16 students, but also for the younger years. The premise is quite simple and wonderfully low prep for teachers. The keyword or term is placed in the middle of a grid with four sections: definition, characteristics, examples and non-examples. 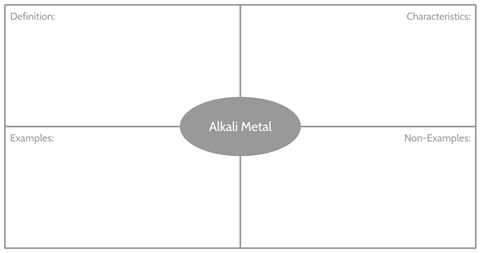 The different sections of the model can help clear up misconceptions. For example, the characteristics section reveals that elements are found in the periodic table, and carbon dioxide isn’t, so students can independently identify and correct their own misconceptions, deducing that it’s not an element. 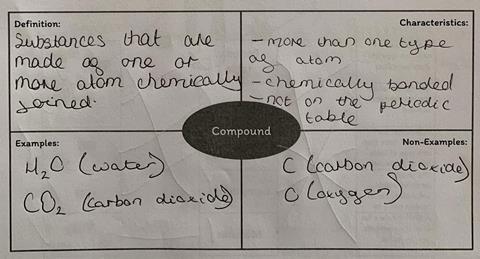 There are many variations of the Frayer model. The terms ‘examples’ and ‘non-examples’ could be replaced with ‘where it can be used’ and ‘where it can’t be used’ when studying a process. You can adapt this, depending on the level of your students.

Example Frayer models as MS Powerpoint or pdf to explore, explain and consolidate new terms with your students.

Example Frayer models as MS Powerpoint or pdf to explore, explain and consolidate new terms with your students: rsc.li/3aOhetu.

When looking at separation techniques, there are a number of techniques that require an array of apparatus. Being able to name the apparatus can help students logically work out a method or process. This can help students to link knowledge and ultimately gain better understanding. Providing examples of these models in pairs can also help students to both clearly identify and compare examples of similar terms, such as those seen in the example above, to fully understand the difference between the two terms.

The terms can be easily adapted for lower-level students, too. Sometimes we overestimate students’ ability to fully understand a definition. However, if we provide them with a definition and a clear set of characteristics, their understanding is really revealed in their ability to identify examples and non-examples. This works particularly well with SEND and EAL students – it shifts the focus from being able to recall a large chunk of text to the actual application of the term or word, which is much more achievable. Diagrams work well for all groups of students, but especially with EAL students. The visual clues mean that they aren’t held back by science-specific language, they can apply the processes and, hopefully, pick up the terminology much more quickly. 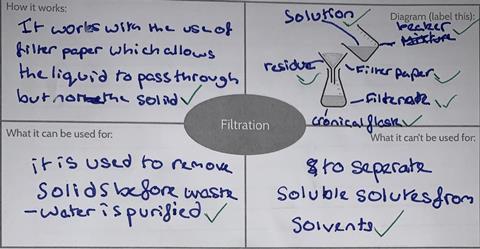 Get the focus right

Introducing these ideas for the first time may seem daunting. However, I’ve found that it’s best to use a visualiser, so students can see the necessary detail – sharing your success criteria from the start will allow them to get the most out of the model. In my experience, it’s most effective to focus on the characteristics. If students understand how to clearly identify the characteristics, the application of the term or process is much more successful and they really focus on the key identifiers.

Students don’t always get it right the first time and, as disheartening as this can be when trying out a new method, it is worth persisting here. The effectiveness of the models greatly increases when using a visualiser and some gentle encouragement. The long-term value of students fully understanding the scientific language from the models far outweighs the time spent introducing the terms.

It’s also crucial to persist with your lower-level students, too – arguably, they get the most out of the models. They may not fully remember the definition, but when they have conquered the models, their application of the terms will be much improved. Does it really matter if they can’t fully recall a definition for a word if they can apply the term to a range of scenarios?