I walked into a colleague’s classroom one lunchtime to find students scrubbing black marker from the desks. ‘Oh no, what happened?’ I asked, horrified at the audacity of the ill-behaved pranksters. ‘We were just working on some past paper questions,’ was the reply.

Had the class rebelled? Refused to complete the exam questions? Black pen covered every desk! Realising my confusion, my colleague invited me to take a closer look. I looked at the desk closest to me. Rather than graffiti, doodling and obscenities, I found equations, chemical formulas and annotated diagrams. ‘You should give it a go,’ they told me. 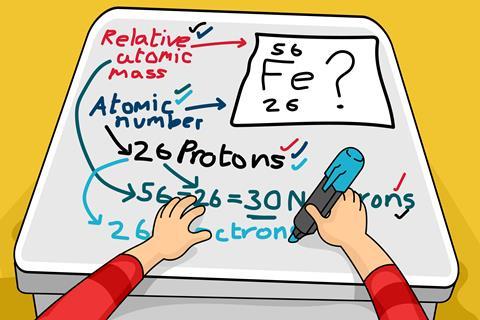 At that time, I had a class that wasn’t engaging with revision. I encouraged them to try to write at least something, anything, in response to mock exam questions, to avoid being confronted with a paper full of ‘I don’t know’ scrawled in every space. I needed to try something new.

Intrigue in the classroom

Next lesson, rather than printing a whole-class set of exam questions, I printed one paper. I pushed a few desks together and sellotaped individual questions to them. I gave each student a dry erase whiteboard marker. ‘Start anywhere, answer what you can!’ I waited for the groans but they were genuinely intrigued. They’d never been allowed to write on desks before.

At the end of that lesson, everyone had answered or attempted to answer at least one exam question. There wasn’t a single ‘I don’t know’ to be seen. It wasn’t perfect, but they had engaged more with the exam questions in this lesson than ever before. I wanted to build on that.

The shock factor had worn off, so I knew I couldn’t do the same thing again and expect the same result. The next time I did it, a week or two later, I cleared the stools from the classroom before the lesson. I’d pushed tables together again but there was now more space to move around. Not having the chance to sit and ponder (or procrastinate), the lesson was more dynamic and tables were filled with answers more quickly. Students didn’t linger if they couldn’t answer a question. I nudged individuals at risk of losing focus towards specific questions.

So many students attempted long-answer questions – a real cause for celebration. With no permanent record of their answers, the stakes were low. And there was a certain level of anonymity, so they were less risk-averse and more likely to try. Bullet points had been added in several people’s handwriting. Students had picked up most of the marks available on even the most difficult questions.

Everyone had something to contribute. Some students in this class had consistently failed to get a grade on end-of-topic assessments so their confidence was low. However, when they worked together, they achieved more than any individual in that class had been able to on their own. I think they learned an important life lesson that day: that they each added value to a team, and they were all better together.

Of course, the novelty soon wears off. Writing on tables could become a gimmick that distracts more than it adds. Time for another iteration. I swapped whiteboard pens for Post-it notes. Students could use them to move and ‘rank’ answers.

This changed the emphasis from simply writing, to reading and evaluating answers. If the question had already been answered, students had to add to it, offer an alternative or vote for it. I gave learners stickers to indicate their favourite answers. I also got them to move the notes around and order them. They had to really read and think about the answers, carefully considering what made an answer better (and engaging with the mark scheme).

I suggest using whiteboard pens and Post-it notes infrequently as a technique to engage disinterested learners. I’ve only ever used them with classes who really needed it – and it wouldn’t have worked if all my classes had done it. In fact, it should feel a bit like breaking the rules. Students should hear the indignation of next classes, questioning: ‘Who’s been writing all over your tables Miss?’