The shapes of molecules 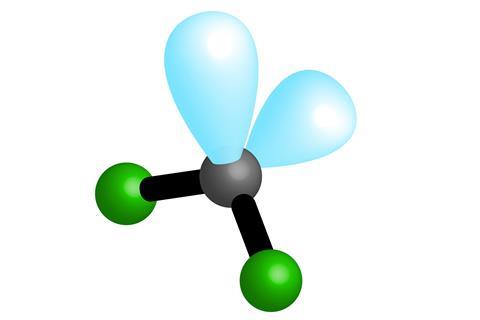 The shape of a molecule affects how it interacts with other molecules and that in turn can give rise to all kinds of interesting phenomena. One important area is how drugs work in the body. Using this as an example, the drug – a molecule with a specific shape – will commonly interact with a larger molecule, such as a protein. This causes a chain of events which give the drug its specific medicinal properties. Understanding how molecules have their particular shapes is therefore very important for chemists, especially when we want to design a new drug to fight a particular disease.

One way to explain the shape of a molecule is called the Valence Shell Electron Pair Repulsion Theory or VSEPR Theory. If you think of the valence electrons as occupying orbitals, that are similar in shape to party balloons, then it is not too difficult to see how different molecules get their particular shapes. For large molecules, such as proteins, the overall shape will be due to the bonding between atoms as well as other electrostatic and steric effects. VSEPR theory is used to explain the 3D shape around an atom in a molecule and for small molecules this can give the overall shape.

Lone pairs of electrons play a significant role in the shape of molecules but it is not always easy to see why. This is especially true when we draw molecules, because we tend to omit lone pairs for clarity. VSEPR theory uses lone pairs to provide many of the observed shapes.

Using the VSEPR model structures, we can predict the shape based on three simple rules:

An example would be methane, CH4, (or AX4 using the method above) where we would look at the carbon atom, count the bonds to hydrogen (4 in this case), then count the number of lone pairs (0 in this case). Using this, VSEPR predicts the structure of methane to be tetrahedral, which is correct.

The shapes of molecules are ultimately governed by the valence electrons and as a chemist you will often have to visualise molecules in your mind. Whether they are flat structures or 3D, the shapes given by VSEPR theory will almost certainly guide you in that process.

The tetrahedral nature of a water molecule together with hydrogen bonding is what makes ice less dense than liquid water. This is why ice floats on water.