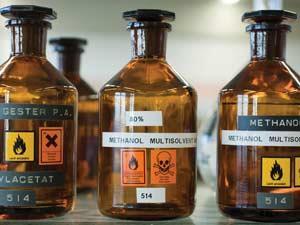 The chairman of the US Chemical Safety Board (CSB), an independent federal agency charged with investigating industrial chemical accidents, is warning against the use of methanol during laboratory and classroom combustion demonstrations, following several accidents at schools and even a museum.

On 3 September, a flash fire erupted at the Terry Lee Wells Discovery Museum in Nevada, US, injuring 13 people, mostly children. The Reno Fire Department quickly determined that the accident was the fault of a museum presenter who did not follow the correct procedure in creating a routine ‘dust devil’ or ‘tornado’ demonstration.

‘It was a simple oversight by the presenter that caused a flash fire that lasted approximately three to five seconds,’ Reno fire chief Michael Hernandez said. The museum immediately announced that it had placed the employee in question on administrative leave pending completion of the full investigation.

CSB chairman Rafael Moure-Eraso said: ‘This unfortunate incident is similar to a number of others that have occurred around the country during lab or classroom demonstrations where methanol has been used as a fuel for combustion.’

In fact, the very day he made the recommendation, four students suffered burns in a high school chemistry laboratory in Denver, US, after a teacher-led demonstration with methanol went awry. The teacher in question has been placed on paid administrative leave pending further investigation.

Back in January, two students at a high school in New York City, US, were seriously injured when a teacher was demonstrating the colours of flames produced by metal solutions in methanol. The demonstration, known as the ‘rainbow experiment’, left the teenagers severely burned.

Rafael also noted that in 2006, high school student Calais Weber was severely burned, and others were injured, at a school in the US state of Ohio, during a similar ‘fire tornado’ demonstration of the same chemical ‘rainbow’ that involved combusting salts with methanol.

In his statement, the CSB chairman specifically called on all schools, museums and science educators to discontinue any use of bulk methanol – or other similar flammables – in lab demonstrations that involve combustion, open flames or ignition sources.

‘There are safer alternative ways to demonstrate the same scientific phenomena, and many teachers are already using them,’ Rafael stated. For example, he said the ‘rainbow experiment’ can be carried out using wooden sticks soaked in chemical salts dissolved in water, rather than methanol.

‘Any use of methanol or other flammables should be either avoided completely or restricted to minimal amounts, which have been safely dispensed at remote locations,’ he warned.

Similar sentiments have been expressed by the American Chemical Society’s Committee on Chemical Safety. The group has called on schools and teachers to immediately end all ‘rainbow’ demonstrations involving methanol or other flammable solvents on open benches. ‘The ‘rainbow’ demonstration performed on an open bench using a flammable solvent is a high risk operation,’ the panel said.

After the 3 September museum incident, the ACS committee issued a statement saying the accident is reminiscent of the recent ‘rainbow experiment’ incidents, reiterating that methanol should never be poured from an open bottle on an open bench top in the presence of a flame or source of ignition.

Greg Dolan, chief executive officer of the Methanol Institute – a global trade association – says the methanol industry supports the CSB recommendation. ‘It is not appropriate to use methanol in a classroom or a museum setting,’ he told Education in Chemistry.

Greg notes that when methanol is on fire it is invisible under bright lights, generating neither flame nor smoke, and that poses a significant hazard potential. ‘This is an issue that we have been concerned about for some time,’ he said.