Why LGBT+ inclusion is a year-round endeavour

Someone has to be the first person in a year group to come out, and it usually happens in year 9.

One, very brave 13-year old declares their sexuality to their teachers and peers. What follows is usually a hastily planned (as far as pupils are concerned) assembly on homophobic bullying, reminding pupils that their use of ‘gay’ as a pejorative is unacceptable and that their school is committed to ‘tolerance’. They are all painfully aware they’ve been brought together because someone in their midst has come out. Whoever it is might as well have a spotlight above their head. Depending on the size of the year group, there will statistically be between ten and 20 pupils in the audience who are LGBT+ but have not yet come out. They will leave the assembly understanding how difficult the road ahead of them could be. 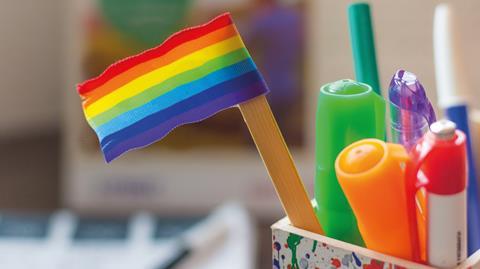 I should say, here, that I believe assemblies on the unacceptability of homophobic abuse are important and necessary. The above was merely to demonstrate the importance of them being given in a pre-existing context. I should also say this is told from the perspective of the hundreds of teenagers I’ve spoken to on the topic since I began touring schools and colleges talking about mental health and related issues. It may be that events were not planned this way. Yet, even if they weren’t, schools are still routinely leaving any discussion of LGBT+ visibility until such a time as their young people become sexually aware. It’s still considered a ‘grown-up’ topic.

Of course, this should change next year, when mandatory sex and relationship education (SRE) is introduced in all primary and secondary schools in the UK. The announcement, along with the subsequent realisation that the compulsory SRE curriculum includes LGBT+ education, has already sparked media outrage and protests outside schools.

Yet, even if every school is required to introduce LGBT+ education, there’s still a danger of the topic being covered solely in an annual lesson.

Those who argue sexuality should be ‘kept out of the classroom’ underestimate the extent to which it is already there. We’re so used to the heterosexual motif we forget to notice it. We think nothing of teaching how many wives Henry VIII had but shy away from discussing the fact that several English monarchs, including Richard II and Queen Anne, had same sex relationships.

Despite the leaps and bounds taken by campaigners and charities such as Stonewall, Diversity Role Models and Educate & Celebrate, being straight and cis gender is still consistently reinforced as the ‘norm’. I still hear five-year old boys being asked by parents if they have a ‘girlfriend’.

For children with heterosexual parents, their way of living is reflected back at them through the media – most children’s cartoons reinforce heteronormativity. So it’s even more important they are exposed to an alternative narrative at school.

Alfredo Carpineti, a spokesperson from charitable trust Pride in STEM, told me the problem of LGBT+ visibility and representation is even more pronounced in the sciences. He believes this is because they have a reputation as being a ‘pure’ form of learning, in which only the evidence matters and social/cultural factors should be kept out. Yet, as he pointed out, ‘no science happens in a historical vacuum’.

Alfredo pointed to attitudes towards the trans community as an example of the way ‘hate spreads from social media, to mass media to universities’. It is this type of rhetoric that can reduce an individual to their sexuality or gender – the school classroom presents an opportunity for young people to see LGBT+ scientists in context, as three-dimensional humans contributing meaningfully to society.

LGBT+ people are statistically more vulnerable to mental illness – four times more likely to develop depression and significantly more likely to die as a result of suicide. One of the reasons for this, I believe, is that LGBT+ people are less likely to have one of their key psychological human needs met: belonging. In a world where most people walk around assuming everyone is cishet unless specifically told otherwise, LGBT+ people are automatically and unconsciously excluded.

Wikipedia lists 27 openly LGBT+ prominent British scientists, including Alan Turing. Normalising conversations around LGBT+ people doesn’t necessarily mean having to have lengthy, in-depth discussions. It is merely acknowledging that certain demographics are underrepresented in STEM and redressing that balance. As Sidonie Bertrand-Shelton of Stonewall points out, ‘A commitment to diversity should include acknowledging BAME and disabled scientists, too.’

That’s why LGBT+ inclusion should be a year-round endeavour, not just confined to Pride month.