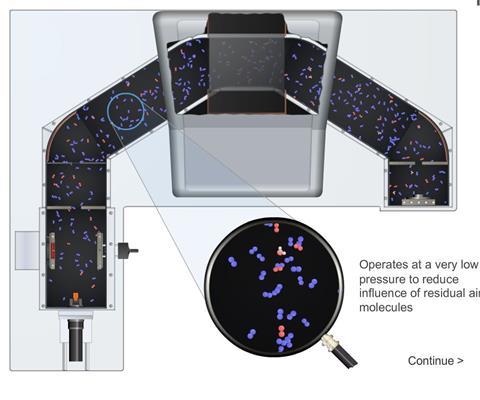 Ionisation chamber: A vaporised sample is drawn in by virtue of the very low pressure inside the apparatus. Atoms (or molecules) are bombarded by fast moving electrons from a heated filament, maintained at a high p.d. The electrons collide with the atoms or molecules and remove other electrons forming positive ions.

High vacuum: The apparatus is kept at a pressure of 10-7 mm of mercury or less. Atmospheric pressure is about 760 mm Hg and so this value represents a very low pressure indeed. This very low pressure is described as a ‘high vacuum’, consequently very few particles are present in the spectrometer and this reduces collisions between electrons and residual air molecules.

Acceleration and collimation region: The ions are then accelerated and collimated (made into parallel beams) into a fine beam by an intense electric field; the overall product is a very fine beam of positive ions travelling with a uniform high velocity.

Deflection chamber: The beam of ions then passes into the deflection chamber. Here the poles of an electromagnet are placed astride the bent tube. This produces a high intensity, variable magnetic field within the tube, normal to ion beam. The field causes a change in the direction of movement of these positive ions. The magnitude of this deflection depends entirely of the mass/charge ratio of the ion. Thus the ion beam is split up into a series of separate beams, each of which has particles of one specific mass/charge ratio.

Detector: By adjustment of the intensity of the variable magnetic field, each separate ion beam can be directed in turn through a fine receiving slit at the other end of the tube where it meets a negatively charged collecting plate. Each positive ion accepts electrons and is ‘neutralised’. A very small electric current then flows in the collector circuit which is amplified and recorded as a mass spectrum. This produces a ‘plot’ of intensities of successive ion beams; the height of each peak being proportional to the number of ions of a given mass/charge ratio reaching the collector plate in unit time.