The 29th final of the national Schools’ Analyst competition was held on the 20 - 21 June 2018 at Bangor University. All attendees were welcomed to the competition by the head of the School of Chemistry, Professor Mike Beckett, Dr Leigh Jones (competition organiser) and Professor John R Dean (on behalf of the RSC/AD and ACTF). Bangor University offers a range of successful degree programmes in Chemistry (BSc(H) and MChem) as well as an MSc in Analytical Chemistry and an MRes Chemistry. In addition, the BSc and MChem programmes have the option for an industrial placement, international experience or european experience year. For this year’s final, Dr Leigh Jones devised a programme of experiments around an environmental and pollution theme. The teams had to carry out four experiments: extraction of a pollutant from a sand sample and analysis by gas chromatography-mass spectrometry; quantification of iron using colorimetric analysis; quantification of chloride ions in seawater / brackish water (Mohr’s method); and, determination of the specific gravity of brackish water. While the judging was taking place, the teams and accompanying teachers, were entertained by Professor Deri Tomos with a stimulating lecture entitled “The several lives of the biochemist”.

The winning team of Year 12 students came from Truro College and were Anna Gilchrist, Abi Tamblyn and Alex Moreman, representing the Western Region of the Analytical Division. They were accompanied by Truro College staff Rosie Maguire and Matt Thurlow (Photo 1). The college received a prize of £3000 together with Amazon vouchers of £75 to each of the three team members. The school was presented with an engraved glass trophy on behalf of the sponsors the Analytical Chemistry Trust Fund. 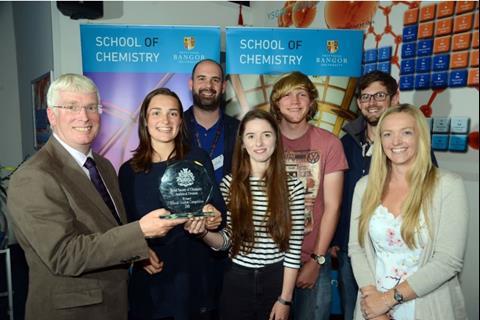 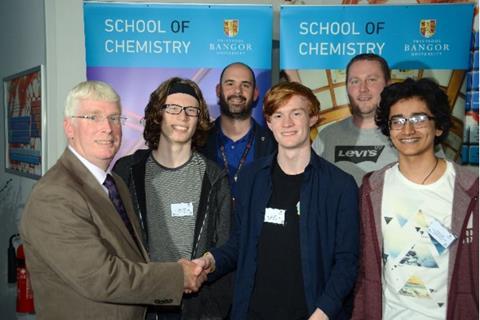 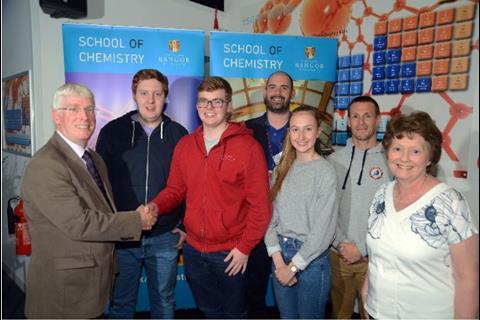 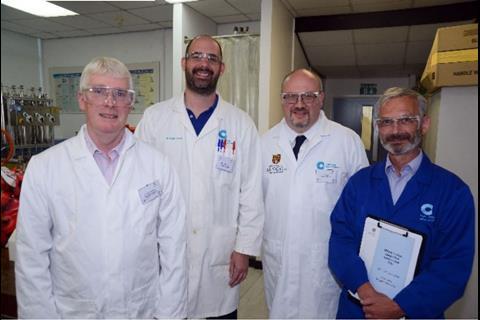 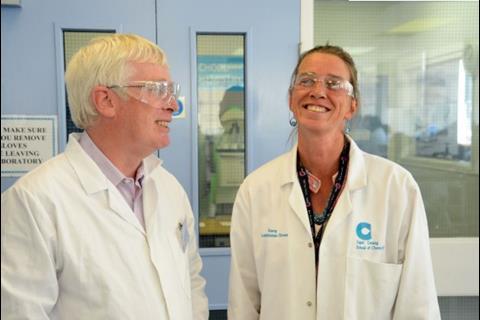 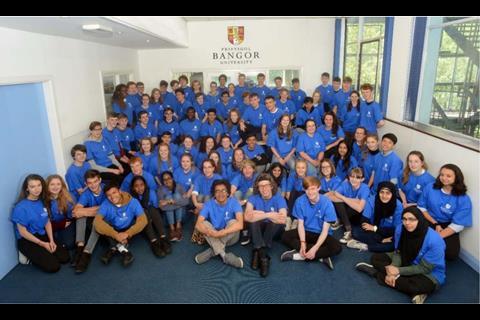 Photo 6: All the Finalists at the 2018 Schools’ Analyst Competition at Bangor University

The runners-up were the team from King Edward VI Camp Hill School for Boys, representing the Midlands Region. The school received £2000 with the team members (Robert Hillier, Alex Byrne and Abhijit Pandit) receiving £50 vouchers each (Photo 2). The team coming third was Ballyclare High School, representing the Northern Ireland Region, and they received £1000 and £25 vouchers to each of the team members (Eoin Metcalfe, Callum Blair and Lucy Sproule) (Photo 3).

The judges (Photos 4 and 5) for this year’s competition were Dr Lorrie Murphy, Dr Vera FitzsimmonsThoss, Professor Mike Beckett (all Bangor), Scott Owen (Techniquest) and Prof. John R. Dean (on behalf of the Royal Society of Chemistry Analytical Division), who also chaired the judging panel and awarded the prizes.

On behalf of the Royal Society of Chemistry Analytical Division, I would like to thank Bangor University for agreeing to host the competition and for providing an excellent venue with facilities that show case analytical chemistry. Specifically, Siobhan Jones, Stevie Scanlan and Dr Leigh Jones for their excellent organisation and attention to detail of the whole event. In addition, I would like to thank staff and student helpers at Bangor for their organization of the final, specifically, Gwynfor Davies, Nicholas Welsby, Glynne Evans ably assisted by the student helpers: Mari SlaterParry, Sean Baxter, Anna Zelmer, Charlotte Booth, Ben Wood, Satsuki Ishi, Rachel Tweedy, Jack Owen, Eluned Hudson, Kenny Chan, Laurine Porte, James Cooper and Mohammed Aliyyami for making the whole event memorable for each of the 26 teams who attended (Photo 6). A special thanks to Delwen McCallum, from the RSC Education Department, who held a workshop with the visiting teachers during the competition.

The competition is sponsored by the Analytical Chemistry Trust Fund, however during the 27 heats in which 344 Schools’ participated throughout the UK and Republic of Ireland, many other organisations also provided financial sponsorship to support this national event. Without their help, the costs involved would be too prohibitive and some heats may not have been feasible. To all the sponsors, the Analytical Division expresses its gratitude. The regional organisers consistently receive a range of complementary comments from schools who participated, saying how much their teams enjoyed the experience. So, if you would like to get involved please contact your local Analytical Division Committee to find out more about where the heats are held in your region or contact me directly.

Thank you to all the Analytical Division Regions for participating in this year’s competition in this flagship event of the Royal Society of Chemistry. Also, without the agreement of the universities to allow us to use their premises, the enthusiasm of the staff, both academic and technical, to develop and validate experiments and the additional help provided by the administrative staff in these universities, the competition would not exist.

Thank you for making the 2018 competition the most successful ever with 344 schools’ participating. Thank you to the 1032 Year 12 students for their enthusiasm in actively engaging in analytical chemistry, and the teachers who have supported their students in attending the competition. We hope that some of the first year sixth form students, aged 16-17 years old, studying Advanced level Chemistry or equivalent (e.g. Year 12 / S5) who participated in the competition, either during the heats and the final, will have been enthused by their experiences to go on to study chemistry at university, and maybe choose analytical science as a future career. Finally, heats of the competition start again in early 2019 throughout each of the Analytical Division Regions and culminate in the final. In 2019 we are delighted that Manchester University has agreed to host the 30th final on Wednesday 19 & Thursday 20 June 2019.