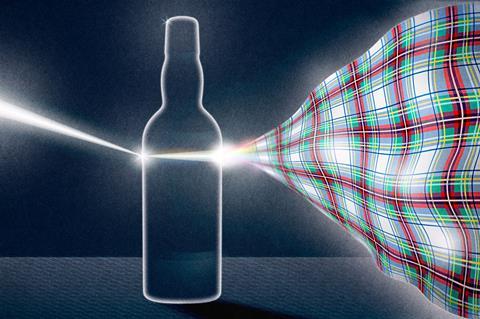 In 2017, Zhang Wei walked into a Swiss hotel and paid the eye-watering sum of £7600 for a shot of 1878 Macallan single malt Scotch. To commemorate the event, Wei took a picture with the manager next to the costly bottle. The picture soon appeared online under the headline, ‘world’s most expensive whisky bought by Chinese millionaire’.

In the following days, manager Sandro Bernasconi was contacted by whisky experts who’d seen the picture and questioned the authenticity of the bottle’s contents. The cork and the label looked too new. To set the record straight, the bottle was sent off for testing. The verdict: the supposedly 140-year-old single malt was in fact a blend from the early 1970s.

The story – like the whisky – is not a rarity. In 2018, more than a third of vintage Scotch whiskies were found to be fake. It is now so widespread that experts suggest that pre-1900 bottles should be assumed fake until the opposite is proved. Proof is usually obtained through carbon dating, checking whether the age of the drink matches the age on the label, and artificial ‘tongues’. The tongues taste by detecting certain combinations of compounds they have been trained to recognise, that way picking up flavours. The idea goes, if it tastes and smells like a 41-year-old Talisker, it probably is a 41-year-old Talisker.

The problem with both these approaches, however, is that a sample has to be extracted from the bottle in order to test it, harming its market value. But new takes on standard analytical methods are now allowing detection of fake whisky through the bottle. One of them, recently published in Analytical Methods, is based on Raman spectroscopy.

When a sample molecule is hit by incoming laser light, most of the scatter will have the same wavelength as the laser. But a small amount, known as Raman scatter, will be of different wavelengths, which depend on the chemical structure of the sample. Taken together they form a ‘fingerprint’. That is, if the glass of the bottle isn’t in the way, completely obscuring the signal of the liquid.

What the authors of the Analytical Methods study did, was introduce a special lens called an axicon into their experimental set-up. The axicon transforms the laser beam into a ring shape, which is then refocused on the liquid inside the bottle. This allowed them to do Raman analysis of 11 different, unopened spirits, each of which could be clearly distinguished.

This kind of approach could help beat counterfeiting in the whisky industry – as long as the bottle is not too rare. There has be something to compare against. A tongue that has never tasted 56-year-old Balvenie will not be able to identify it, and neither will a Raman spectrometer. If there is only one bottle left and it doesn’t match any other profile, there’s no way to prove it’s the real deal. But then again … there’s no way to prove it isn’t. Cheers!