Where did the Moon come from?

The Moon is not only our closest neighbour, it affects all life on Earth. If it suddenly disappeared, there would be no more seasons and our climate would run rampant. But despite its proximity to Earth and its importance to Earthlings, we still don’t know for sure how the Moon came to exist in the first place. New evidence is still being discovered, forcing us to readjust our understanding of what we think happened.

There have been many theories and some feel as epic as the Greek myths. For example, Charles Darwin’s second son, George, proposed what is known as the Fission hypothesis. He thought the ancient Earth had spun so quickly that it shot a chunk of itself into space, creating the Moon. The hole that the Moon supposedly left behind was the deep Pacific Ocean. Unfortunately, there was a huge age mismatch: the Moon formed about 4.5 billion years ago, and the basin of the Pacific Ocean is only about 200 million years old. 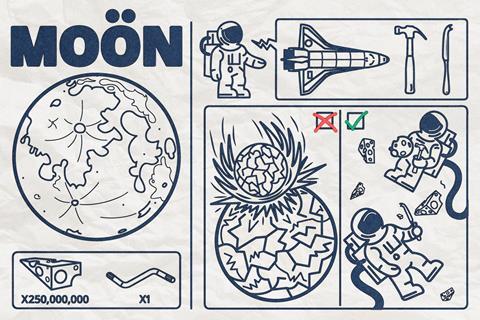 Who’s to say the Moon wasn’t made of cheese from a flatpack kit?

Another approach was the Capture hypothesis, which suggested that the Earth had captured a ‘wandering body’ – like an asteroid – through gravity. This was disproven when Moon rocks were brought down to Earth from the Apollo missions. They showed the Earth and the Moon have practically identical oxygen isotope ratios, something that is otherwise as distinct as fingerprints within the solar system.

So what did happen? The most-accepted idea is called the Giant-Impact hypothesis, or the Big Splash. It suggests Earth was struck by a planet about half the size of itself, called Theia after the Greek Titan who gave birth to the Moon goddess. The impact created a belt of rocks from both Theia and Earth that eventually merged and became the Moon.

The oxygen isotope evidence from the Apollo missions backs this theory up; the Earth and Moon are so similar because they have a common origin. The Apollo rocks also indicate that the Moon was once molten and covered in magma, which is exactly what you would expect because a giant impact causes everything to heat up.

Digging into the evidence

But it’s not a perfect theory. There is an issue with the amount of iron oxide on the Moon. Recent evidence from the Nasa Lunar Reconnaissance Orbiter shows that in the lunar highlands, there is less iron oxide relative to the rocks on Earth, but in its deep craters – hypothesised to reflect the subsurface – there’s more. It’s currently not obvious how this distribution would have been created. Did the collision dig deeper in towards Earth’s iron core than previously thought? Or was Earth in fact covered in a magma ocean at the time, as some have suggested?

Clearly the story of the Moon is also the story of early Earth, and without one we cannot know the other. The work towards a complete theory that explains all the available evidence continues …

Teaching analytical chemistry? Try this simple, inexpensive experiment aiming to identify a chunk of meteorite based on its nickel content (Plus, it can also be done just as a teacher demo).