Squeezing the goodness out of the Moon with electrochemistry 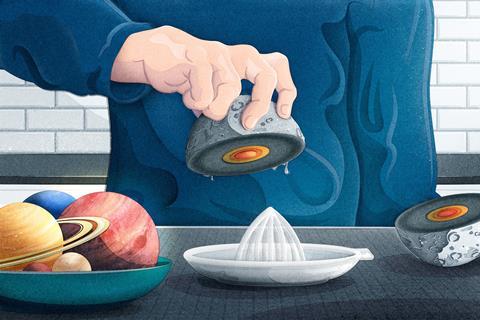 As the world’s space agencies are preparing for a return to the Moon, chemists based at the University of Glasgow are tantalisingly close to securing them the tech to make their own breathable, lunar air. If they are successful, it would make the planned ‘Moon village’ less dependent on deliveries from Earth.

Moon rock naturally contains around 45% oxygen, so while recent discoveries of lunar water have raised hopes of securing hydrogen and oxygen that way, the rock itself could also prove to be a figurative gold mine. You want nothing unnecessary on board a spacecraft, so the fewer storage tanks of food, water, fuel and air you have to bring, the better.

In collaboration with scientists from British firm Metalysis, the Glaswegian chemists have shown that they can extract almost all of the oxygen present in JSC-2A, a kind of artificial moon rock. They do this using an electrochemical process with a molten salt electrolyte and a tin oxide anode. The powdered moon rock, which is made to have the same mineral and chemical properties as the real stuff, undergoes deoxidation, liberating O2 gas and leaving behind alloys rich in aluminium and iron.

It is hoped that these left-over metal alloys could be used for Moon construction work. But the main idea is to use the oxygen for making breathable air as well as the rocket propellant that gives a spacecraft its much-needed thrust. That would mean that rockets could go to the Moon, refuel and set off for Mars or even deep space.

The method the chemists used is not new, but usually there is no interest in keeping hold of the oxygen. For this application though, oxygen capture and storage is key. With the current design, about a third of the liberated oxygen can be detected in the air above the reactor but the rest of it is lost – possibly due to corrosive reactions with the reactor vessel.

It is details like this that will need to be worked out in the next phase of development. The scientists hope that, with adaptations like a new vessel design and a reusable anode, they can achieve a 40–45% oxygen yield per kilogram of moon rock. The associated company, Metalysis, has landed a contract with the European Space Agency (ESA) that will fund them for nine months to improve the process.

Nine months may not sound like a long time, but the Moon return project – called the Artemis Program after the Greek goddess of the Moon – has its own set of looming deadlines. The first astronauts are set to touch down at the lunar south pole in just four years from now. Artemis Base Camp, the prospective lunar base, is scheduled for the end of this decade.