What is organic synthesis?

Use this explainer to familiarise students with organic synthesis, including carbonyl chemistry, as part of their preparation for the Chemistry Olympiad

Organic synthesis is a common topic in Olympiad questions, but it’s often less familiar to students at the time they take part in the competition. This explainer provides an introduction to this topic, with a particular emphasis on carbonyl chemistry, to help students get to grips with the key ideas.

Students should read the introduction, before taking a look at a worked example of a past Olympiad question on the topic. They can then have a go at answering a past question themselves, before checking their answers.

You can download the organic synthesis explainer as a PDF using the following link. The introduction to the topic is also reproduced below.

Synthesis of a target molecule such as a drug or pesticide is a common challenge for organic chemists. Once a molecule is identified as a suitable target, the job of the organic chemist is to work out the most efficient way to synthesise that molecule. This requires developing a sequence of steps that start with a relatively simple, and readily available molecule, and builds to the final target molecule using the fewest number of steps and the most efficient reactions along the way.

The carbonyl group (C=O) is without doubt the most important functional group in organic chemistry. It can be found in a wide range of compound types some of which are shown in figure 1. 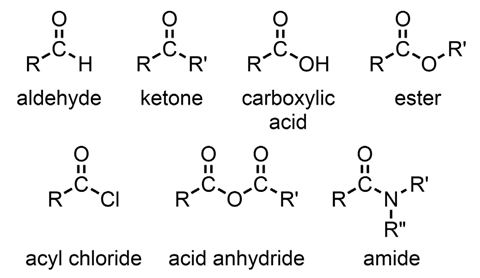 Molecules that contain a carbonyl group are excellent intermediates in a synthesis owing to the range of transformations they can undergo.

Oxygen is more electronegative than carbon. This leaves the carbon atom in a carbonyl group short of electron density and hence electrophilic. As such it can react with a range of nucleophiles resulting in the formation of a wide array of new compounds. Some of the most common transformations of aldehydes and ketones are shown in figure 2. 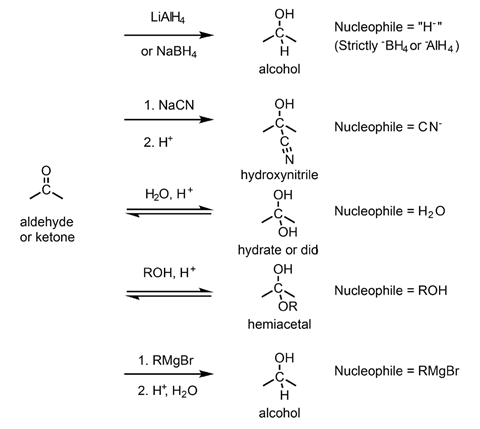 Figure 2: transformations of aldehydes and ketones.

Leaving groups are anions such as Cl–, RO– and RCOO– that can be expelled from a molecule taking their negative charge with them. Esters, acyl chloride and acid anhydrides contain a carbonyl group with one of these leaving groups attached to the carbonyl carbon atom. This means that once attack by a nucleophile has occurred the intermediate formed is unstable and collapses again by an elimination reaction. The best leaving group attached to the central carbon atom is eliminated and the C=O reformed. Figure 3 outlines the mechanism for such nucleophilic addition-elimination reactions.

Figure 3: the mechanism of nucleophilic addition-elimination reactions where X represents a leaving group.

As a result of this reaction, acyl chlorides in particular can be converted into a wide range of carboxylic acid derivatives.

Figure 4 gives an overview of some of the most common transformations involving carboxylic acid derivatives. 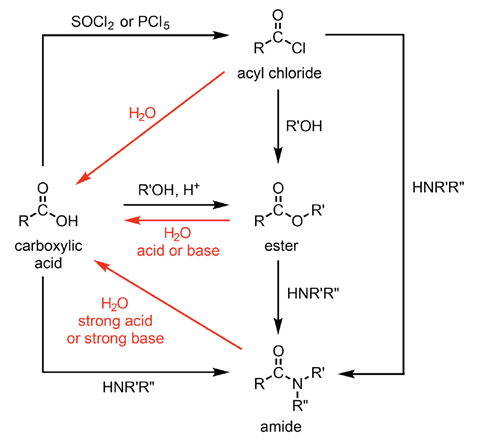 A final type of carbonyl compound of note is aromatic ketones. These can be formed from acyl chlorides via a Friedel-Crafts reaction using aluminium chloride as a catalyst.

In a Friedel-Crafts reaction, a hydrogen atom on a benzene ring in an aromatic compound is substituted for an acyl group to form an aromatic ketone as shown in figure 5.

Figure 5: a Friedel-Crafts reaction between an acyl chloride and an aromatic compound. -R’ represents analkyl or aryl group attached at any position on the benzene ring.