Any student asked to conduct an internet search for the meaning of the term equilibrium is likely to find a variety of definitions ranging from ‘a state in which opposing forces or influences are balanced’ to ‘a calm state of mind’. Indeed, in school, pupils’ first experience of the term may well be in these contexts. In the science classroom it could be while studying balanced forces. At pre-16 level the concept of chemical equilibrium is likely to be first encountered in the study of the Haber process, which is often given the treatment of ‘learn the reaction conditions and, by the way, the symbol for the equilibrium is ⇌’ At this stage Le Chatelier’s principle (also known as the equilibrium law) may well be introduced and pupils asked to apply it.

The idea of equilibrium being a balancing act soon becomes entrenched. So it is unsurprising that when met at post-16 level teachers need to unpick pupils’ misconceptions in order to provide a concrete understanding of the topic that will allow for the application of a quantitative approach. Much academic research has been conducted to determine exactly what students find difficult as they study this aspect of chemistry and this is reflected in the approach outlined below. Developing an understanding of these key concepts is essential in allowing pupils to make progress in the study of chemical equilibria.

Most of the chemical reactions encountered by pupils in science lessons start with a set of reactants that are converted to products. A common example might be the thermal decomposition of a metal carbonate. The notion that this process could be reversed if the conditions for the reaction were modified is unlikely to be touched upon especially since, for the most part, the experiment would be conducted in an open system. However, this concept of reversibility is fundamental to the understanding of chemical equilibria.1

In early years education pupils encounter the water cycle. They become familiar with the ideas of reversible physical change which is temperature dependent. 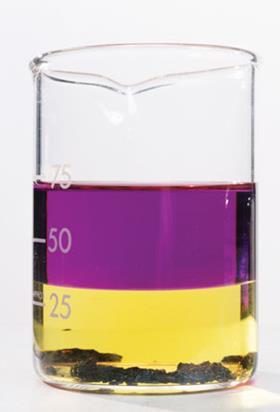 Perhaps a greater challenge is conveying the idea of the process being dynamic at equilibrium.2 Research with pre- and post-16 students has revealed that, even after teaching, students’ ideas are confused about equilibria. It is therefore unsurprising that when a pupil is studying a reaction at equilibrium in which there is no longer an observable change, they do not appreciate that a dynamic process is at work.

The dynamic nature of equilibria

One possible approach is to consider the equilibrium achieved by adding an iodine crystal to a test tube containing cyclohexane and a dilute potassium iodide solution and observing the colour distribution across the two immiscible layers.3 Once equilibrium is achieved it is possible to ask pupils what they think is happening at the boundary between these layers. ‘What would happen to an iodine molecule as it hits the boundary travelling from the lower aqueous layer towards the cyclohexane? Will it stop?’ While not a chemical reaction, the colour distribution provides a useful focus that could lead into particle modelling activities.4 Such models need to convey the idea that change is occurring on a microscopic level while at the macroscopic level there appears to be no overall change.

Walking up the down escalator is an often used analogy here. To the external observer there appears to be no movement yet we know movement is taking place in both directions. If the escalator speed is increased the position of the person on the escalator will change. A key question here is what needs to happen to re-establish equilibrium. The dynamic nature of this situation helps convey that this is a model (with limitations) of a natural phenomenon.

The Key features of dynamic equilibria box highlights some steps to aid pupils’ understanding of equilibrium.

Changing the conditions is a key feature of what is often described in many textbooks as shifting the equilibrium position. Le Chatelier’s principle attempts to summarise this. However, his statement is a summary not an explanation, so despite students needing an awareness of Le Chatelier’s principle, an understanding of what is taking place is all-important. The equilibrium between cobalt chloride and water provides a further visual example of an equilibrium.

In this experiment a cobalt equilibrium mixture is made and placed in two sealed test tubes. These are subjected to changes in temperature by placing them in water baths: one hot and one cold. The temperature can be changed quickly by swapping the tubes from one beaker to another. The equilibrium between the two cobalt species is disturbed by changing the temperature. The equilibrium is: 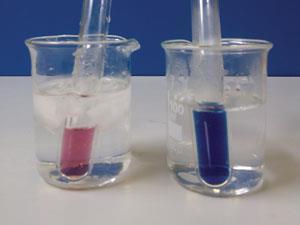 The key point to make to students here is that the change in equilibrium position produced by temperature change is in accordance with Le Chatelier’s principle but it does not explain the change. It is the thermodynamics of the process that determines the predominant species at a given temperature.

ΔH for the reaction for the formation of the blue complex is positive (endothermic) hence, warming the solution causes a ‘shift’ to the left and the solution becomes blue and vice versa.

This provides an opportunity to also explore students’ understanding that once a given system has reached a point of dynamic equilibrium the rate of the forward reaction is the same as the rate of the reverse reaction. In this case the relative proportions of pink and blue can be seen as the colour change occurs rapidly when the temperature is changed. In addition the ratio of the concentration of products to reactants can also be considered leading to the introduction of the equilibrium constant.
If extending this further, then the key point needs to be made that changes in the temperature of a system at equilibrium result in the establishment of a new value for the equilibrium constant value, Kc.

Steve Hacker is an independent science education consultant based in Cirencester, UK. Steve would like to acknowledge and thank David Everett for his input into this article

This topic is covered in one of the Royal Society of Chemistry’s Developing Expertise in Teaching courses, designed to support you throughout your teaching career.

To find out more about the CPD for Teachers courses on offer, visit www.rsc.org/Education/CPD.