In this series, Colin Baker of Bedford School provides spectacular demonstrations, designed to capture the student's imagination. The demonstrations are easy to prepare, safe to dispose of and, they work. 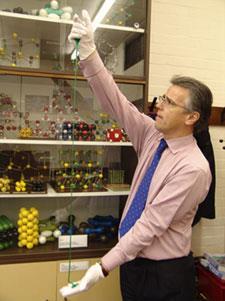 Nothing tends to imprint chemical facts upon the mind so much as the exhibition of interesting experiments
- Samuel Parkes, 1816

Polymers are substances that contain a large number of structural units joined by the same type of linkage. These substances often form into a chain-like structure. Polymers in Nature have been around since the beginning of time - starch, cellulose, and rubber are all polymers. Man-made polymers have been studied since 1832. Today, the polymer industry has grown to be larger than the aluminium, copper and steel industries combined.

Polymers already have a range of applications that far exceeds that of any other class of material available to man. Current applications extend from adhesives, coatings, foams, and packaging materials, through textile and industrial fibres, and composites, to electronic, biomedical and optical devices, and precursors for many recently developed high-tech ceramics.

Poly(ethenol), ie poly(vinyl alcohol), PVA, has a repeating vinyl alcohol unit with a molecular formula of [-CH2 CHOH-]n. Its molecular weight can range from 25000 to 300000, depending on its chain length, which affects its viscosity.

Borax, ie sodium tetraborate decahydrate, Na2B4O7.10H2O, when dissolved in water, hydrolyses to form a boric acid-borate ion solution with a pH of about nine.

Borax is interesting since it contains boron atoms with both tetrahedral and trigonal planar stereochemistry. Boric acid's acidity is explained by electron pair acceptance rather than proton donation, and it is therefore a monoprotic acid, not triprotic as expected.

When solutions of poly(ethenol) and sodium tetraborate are mixed, the borate ions, B(OH)4– (aq) react with the hydroxyl groups (OH) of the poly(ethenol). Weak cross-linking within the polymer occurs to produce a viscoelastic gel. The high solubility in water suggests that extensive hydrogen bonding exists.

Poly(ethenol) as a solid is mixed in water to make a 4 per cent solution, ie 40g per 960g of water. The best results are obtained by heating the water to ca 80°C on a hot plate with a magnetic stirrer. Sprinkle the powder in very gently and slowly on the top of the solution while stirring to avoid the mixture clumping together. Temperatures above 90°C may result in decomposition. Continue to sprinkle the powder into the hot solution while it is stirring. After all the powder has been added to the water, place a top on the vessel. If the water evaporates, a skin of poly(ethenol) will form. This can be lifted off and shown to the students. Continue stirring until the mixture is uniform (it will become viscous). Allow the solution to cool. The resulting solution is ready for use.

Wear safety glasses and rubber gloves at all times. There are no hazards associated with the poly(ethenol). Sodium tetraborate decahydrate is toxic by ingestion. Borate concentrations below 8% are not classified as hazardous. Take care to keep the chemicals and the polymer away from clothes because they may produce permanent stains.

Reaction of PVA with borax

Gases and liquids are classified as fluids because both can flow and change their shapes. Sir Isaac Newton's (1642-1727) Law of Viscosity states that only a change in temperature affects the viscosity of a fluid. Newton, however, had never seen the polymer produced by this experiment. This creepy ooze, like other fluids, shows an increase in molecular motion with an increase in temperature but, unlike other fluids, its viscosity increases with an increasing pressure. Pressure makes it behave as a solid. Since this polymer defies Newton's Laws of fluids, it is considered a 'non-Newtonian' fluid.

Sodium tetraborate decahydrate serves to cross-link the poly(ethenol), see equation (i). Thus the degree of cross-linking can be varied by changing the borate concentration.1 This can be done by 'disabling' the borate by protonation with a strong acid. The titration of the cross-linked polymer with sulphuric acid allows students to examine the relationship between cross-linking, viscosity, and the onset of gelation. This modification produces an interesting experiment to introduce students to the relationship between molecular structure and the bulk properties of macromolecules.