Methylene blue is an aromatic compound that produces a blue solution when dissolved in water. It is a redox indicator and relies on electron transfer rather than changes in hydrogen ion concentration to change colour. A redox indicator undergoes a definite colour change at a specific electrode potential.

A number of features of the 'blue bottle' reaction makes it ideal to use for investigating reaction kinetics - it is very quick, the chemicals are relatively cheap and safe, and the measurements are straightforward. In this demonstration, a stoppered flask is half-filled with a colourless solution. On shaking, the solution turns blue, and on standing, the solution returns to colourless. This cyclic colour change can be repeated by successive shaking and standing.

Glucose (an aldohexose) in an alkaline solution is slowly oxidised by oxygen, forming gluconic acid:

In the presence of sodium hydroxide, gluconic acid is converted to sodium gluconate. Methylene blue speeds up the reaction by acting as an oxygen transfer agent. As glucose is oxidised by the dissolved oxygen, methylene blue itself is reduced, forming the colourless methylene white, and the blue colour of the solution disappears. 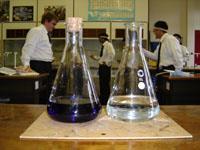 Put the water in the flask, add and dissolve the sodium hydroxide. Add the glucose when the sodium hydroxide has dissolved. When all the glucose has dissolved, add five drops of the indicator solution and swirl. Allow to stand and the blue colour in the flask slowly disappears forming a colourless solution. If the flask is shaken a few times, then the blue colour is restored. This cycle of colour change can be repeated many times over a period of 45 minutes.

Sodium hydroxide is corrosive, contact with the eyes can cause serious, long-term damage. Significant heat is released when sodium hydroxide dissolves in water.

Several variations on this demonstration are possible, one of which allows students to see the effect of concentration on the rate of reaction.

Half fill two one-litre conical flasks with distilled water. Put 2.5 g of glucose into one flask (A) and 5 g of glucose into the other (B). Dissolve 2.5 g of sodium hydroxide in flask A and 5 g of sodium hydroxide in B. Add 1 cm3 of 0.2 per cent solution of methylene blue into each flask, stopper both flasks and shake to dissolve the indicator. Set aside the flasks and observe as the blue colour gradually disappears at a different rate in each flask.

The flask with the higher concentration takes about half the time for the colour to disappear, using up the dissolved oxygen twice as fast. You should point out to students that, having gone colourless, a blue zone remains close to the surface of the solution. This is a result of oxygen diffusing from the air space within the flask into the solution.

This experiment could be used to determine the kinetics of the reaction and thus the mechanism.

The activation energy can be calculated using a normal Arrhenius plot - natural logarithm of the decolouration time (lnt) against the reciprocal of absolute temperature (1/T). Campbell2 explains this can be done because the rate of the slow step is independent of the oxygen concentration, and thus the time, t, which is required for the total oxygen to disappear, is directly related to the rate constant, k. A straight line is obtained from the plot of lnt against 1/T. The rate law for the reaction is:3

where Dox is the oxidised (blue) form of methylene blue and CH is the carbohydrate, glucose. A simple mechanism for the reaction is:

where D is the reduced (colourless) form of methylene blue and X- represents the oxidation products from glucose (arabinoic, formic, oxalic and erythronic acids). The enthalpy of the reaction has been reported as 23 kJ mol-1.