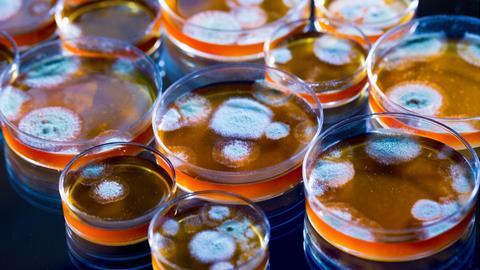 Chemistry is the key to killing bacteria – and must get faster in working out how to do so, finds Andy Extance

The death of a 70-year-old woman in Nevada, US, in September 2016 was a tragedy for the whole world, because of what it warns us about the future for antibiotics. She died after being treated for a hip injury in India and then getting a bacterial infection that drugs couldn’t fight off. Later tests showed the germ involved could survive 26 different antibiotic types.

This patient is not alone in facing bacteria that survive antibiotic treatment, an ability known as antimicrobial resistance (AMR). In 2016, the UK’s AMR review, led by Lord O’Neill, found that drug-resistant infections already cause around 700,000 deaths worldwide each year. It also predicted this could rise to 10 million deaths a year globally by 2050.

Chemistry is of fundamental importance in drug discovery and development. This article puts into context a number of concepts in A-level chemistry embedded within the development of pharmaceuticals. It shows how an understanding of chemistry is important for biology and medicine. In particular it demonstrates how an understanding of nucleophiles and electrophiles is important in the reactions of β-lactam antibiotics and how chemists can modify the structure of natural products to make useful medicines.

AMR partly comes from how bacteria multiply and evolve naturally, with one cell splitting into two every 20 minutes. Sometimes errors in copying the genetic instructions for making proteins in the new cell lead to resistance. Bacteria can also share useful genes with other germs that don’t have to be the same type, known as horizontal gene transfer. Giving antibiotics then kills some germs, but those with genes that help ignore or fight the drugs carry on growing and multiplying normally.

Resistance emerges quickly, notes Laura Carro-Santos from the University of East Anglia in Norwich, UK. Doctors started giving an early antibiotic, streptomycin, in 1946. ‘The first time resistance was observed was that same year, 1946,’ Laura says. ‘You’ll see other examples where there is a gap of 2–3 years.’ 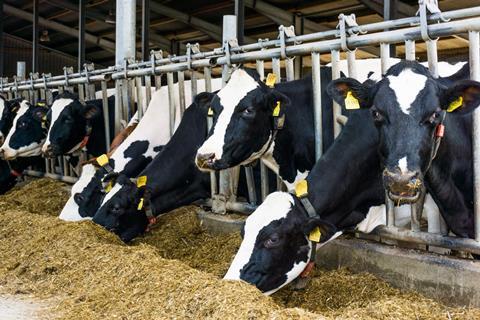 Humans make matters worse. Farmers widely feed animals antibiotics to help them grow bigger. While this produces more meat and dairy products, it’s a major cause of AMR. Some drug makers add to the problem. In April 2017, scientists found lots of drug residues in local water sources near antibiotic factories in Hyderabad, India. They also found AMR among germs exposed to the pollution.

Antibiotics are generally organic molecules that fit into large protein molecules in the bacteria like a key into a lock, Laura underlines. Small changes in a bacterium’s genes can change its lock structure, stopping the drug working. ‘If they don’t fit perfectly then the lock won’t open,’ Laura says.

For example, the well-known penicillins bind to proteins in bacteria’s cell walls. That stops the germs growing, and lets their innards spill out. Because their cell walls are different to those in human cells, penicillins safely target germs without harming us.

The vital chemical group in penicillins that stops cell wall growth is known as a β-lactam ring. With only four atoms this ring is strained, ready to spring open and react. But the rest of the drug’s structure is carefully designed too. For example, chemists added an amide side-chain to withdraw electrons from the carbonyl group in the β-lactam. That makes the carbon atom in the β-lactam carbonyl bond very electrophilic. Consequently, amino acid nucleophiles in cell wall proteins that would normally attack electrophiles on other cell wall proteins attack the β-lactam carbonyl instead. The β-lactam ring opens and bonds covalently to the cell wall protein, creating leaks through which the germs disintegrate.

Unfortunately, the amide side-chain can also act as an internal nucleophile and attack the β-lactam carbonyls, opening rings before they can kill germs. To avoid self-destructing in this way, chemists added an electron-withdrawing substituent to the amide carbonyl group to make it a weaker nucleophile.

Bacteria have also evolved weapons to defend themselves against penicillins, such as β-lactamase enzymes that open β-lactam rings before they can attach to germs’ cell walls. ‘If we keep targeting the same thing bacteria are clever enough to develop strategies to prevent themselves from being attacked,’ Laura says. So we humans have brought another weapon to this fight. Clavulanic acid enters and jams the lock where β-lactamase enzymes would normally break antibiotics down, stopping it from working. Today, pills of the widely used β-lactam antibiotic amoxicillin normally also contain clavulanic acid, Laura notes.

Bacteria have evolved weapons to defend themselves against penicillins

And some germs are tougher than others. Gram-negative bacteria are named after the result they give in a staining test. Those that come up negative have an extra layer in their cell wall, Laura explains. Drugs need to get through that tougher wall, and while some β-lactams can, many others can’t. Some gram-negative germs have also evolved pumps that remove drugs from their systems before the drugs can act. ‘That’s why we ideally need new molecules that target something different,’ Laura stresses.

Laura is therefore developing new potential antibiotics from molecules that one type of bacteria found in soil uses to kill others. And news media often reports on possible new antibiotics from even weirder sources, like ants or platypus milk. In such cases, scientists know far less about what these molecules target than for β-lactams. They might be able to see what’s happening to the cells, but not know much about the lock the molecule is fitting into, Laura explains.

While such early results are welcome, turning them into real treatments isn’t easy, according to Nawaz Khan, vice president of anti-infectives research at Summit Therapeutics in the UK. ‘It’s one thing killing bacteria in test tubes and another thing making a drug,’ Nawaz says.

Summit promises to rapidly explain how new potential antibiotics work so that scientists can understand them as well as they do β-lactams. It has technology that reads germs’ genes to see how they’re responding to drugs. ‘We’re able to understand what the bacteria are doing to evolve and become resistant to the compound,’ Nawaz says. ‘It’s extremely powerful.’ Testing germs against well-known drugs, Summit can ‘clearly pinpoint all the known resistance mechanisms and more’, he adds.

Understanding the chemistry of biological processes

This activity uses videos of molecular graphics to visualise the reactions taking place in the formation of a bacterial cell wall and the interaction of penicillin-like drugs with the transpeptidase enzyme. Students interpret the text of the accompanying article by identifying the reaction mechanisms taking place when the antibiotics bind at the active site of the enzyme. It involves several A-level chemistry topics including functional groups, nucleophiles, electrophiles and zwitterions.

Dowload this worksheet and the answers from the Education in Chemistry website: rsc.li/2S2hnR

Germ of an idea

Using this tool, Summit is seeking to kill germs through new targets ‘that are absolutely essential for the bacteria to survive’, Nawaz says. It is also designing drugs that stop resistance emerging as quickly. Part of that is looking for drugs that will only kill a few types of germs, which helps avoid resistance. It’s also easier to find these ‘narrow-spectrum’ drugs. ‘We typically go for compounds that are less than 500 molecular weight and have what we believe are the right properties to get into bacteria,’ Nawaz says. ‘The challenge getting compounds in, especially in gram-negatives, is quite enormous.’ 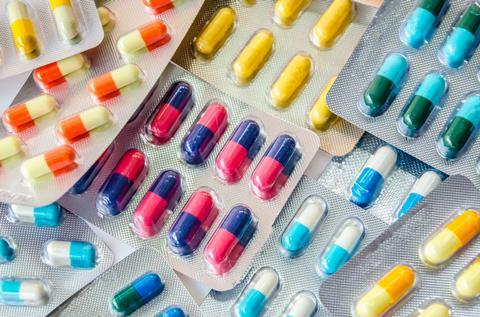 Phase 3clinical trials are the last stage of testing a new drug in humans before it can be approved for medical use. Around six out of every ten drugs entering phase three are generally approved.

One example is ridinilazole, an antibiotic Summit designed to treat Clostridium difficile germs that can infect people’s bowels and cause diarrhoea. C. difficile can cause mild gut problems in people recently treated with other antibiotics. But C. difficile can recur in patients given existing drugs two to three weeks after they seemed better, Nawaz says. This can then become very serious.

To find a better treatment, Summit has done something unusual. To get through our whole body, drugs in pills we swallow normally pass from our gut into our bloodstream, which carries them to the cells that need them. But Summit has designed ridinilazole so that it stays in the gut, preventing it from reaching germs elsewhere that might start evolving resistance. It also specifically kills C. difficile rather than other friendly gut microbes, unlike drugs now used.

Summit has already been testing ridinilazole in people. ‘Very strong’ results so far mean that in early 2019 it’s going to enter the last stage of human testing, known as phase 3 clinical trials, before it can be approved for medical use. Those tests will take two years, but success isn’t certain – around six out of every ten drugs entering phase 3 are generally approved.

Ridinilazole will join 15 other antibiotics in phase 3 as of September 2017. At that time 16 more were in phase 1 and 14 in phase 2. One had completed phase 3 and applied for approval from US authorities, and two had been recently approved in the US. Yet only one in four of these drugs have a new target for how they kill germs – and only two target the most urgent bacterial threats.

And while over 40 companies have antibiotics in human trials, only seven are among the 50 biggest drug makers. Five top companies have recently stopped working in the area. That’s mostly because new antibiotics are kept as a last resort and therefore sell in low volumes, harming companies’ income. Other groups are therefore stepping in to help. For example, the US government and UK research charity the Wellcome Trust set up the CARB-X scheme in 2016. CARB-X aims to provide $500 million (£388 million) for AMR research projects, with up to $4.5 million for Summit.

‘I’m glad that institutions are doing things to promote antibacterial research,’ Laura says. ‘I’m a bit disappointed with the pharmaceutical industry. I understand why, but they shouldn’t be withdrawing.’

Nawaz emphasises the need for both financial support, and new ideas. ‘Over the past 100 years people have only been working on the classical types of antibiotics,’ he says. ‘Bacteria are evolving considerably, with resistance to all these antibiotics in place already. It’s crucial that companies are financed to bring through drugs that tackle AMR in new ways.’

Article by Andy Extance, a freelance science writer based in Exeter, UK. Teaching resource by Jenny Koenig, an education consultant based in Cambridge.