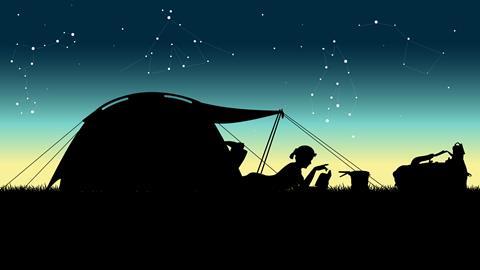 Hayley Bennett explains how, with the help of a little chemical know-how, to stay warm, dry and well fed when camping

You’re probably thinking there’s no place further removed from the sterile environment of the laboratory than a mud-flecked, smoke-filled campsite. But you can’t get through a camping trip without putting some chemistry into practice, and some of it is quite sophisticated.

Take fire-lighting, which is often one of the first things to do when setting up camp for the night. There’s some basic, but important, science to bear in mind. You’ll need fuel, oxygen and heat to complete the fire triangle. But it’s a bit more complicated than that, as any good bushcraft expert will tell you. The fuel, typically wood, has got to be dry or really flammable, or you’ll struggle to get your fire started. Birch bark, for example, contains flammable resin, so even if it’s a little wet out, you should be able to get some flames going. You can also look for something called fatwood among dead, rotting pine tree stumps. This rot-resistant wood is chock-full of a resin that contains terpenes. When processed the resin gives us turpentine (turps), which is best known as paint thinner. However, because turpentine catches fire at around 35ºC – lower than body temperature – it’s verging on extremely flammable.

Most young people will enjoy camping or other outdoor pursuits at some point during their school career. Whether it is with family on a holiday trip, with a uniformed organisation or as part of a Duke of Edinburgh expedition, they will have to think creatively to solve problems and often chemistry has the answer. Link techniques and subject knowledge to practical applications to engage and enthuse learners. 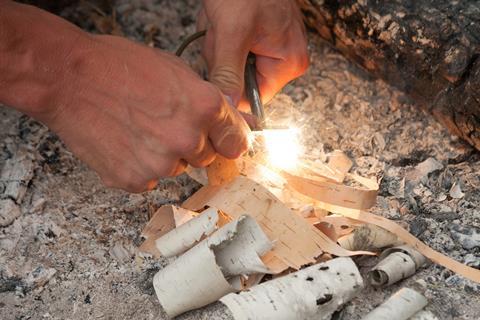 Wood must be dry or fairly flammable to start a campfire

Oxygen is readily available on a campsite, of course, but to keep a fire going, you have to build it to make sure the oxygen can get in. This requires some careful structural groundwork before you strike a match. And then, talking of matches, there’s the third element: heat. Matches create heat through friction when you strike them against the box, but they may not be the most failproof solution on a wet weekend in Wales (other soggy camping destinations are also available). That’s why seasoned campers sometimes use a tool called a ferro rod or fire striker. A ferro rod is a thin rod made from an alloy that contains, among other elements, iron and cerium (ferrocerium). Ferrocerium was invented by Austrian chemist Carl Auer von Welsbach in 1903. When a ferro rod is struck, tiny fragments of ferrocerium fly off and quickly reach thousands of degrees as they are oxidised in the air. When camping, often a ferro rod is a better option than a regular lighter because it will last longer and light more fires.

Now, for a whistle-stop tour of camping’s other chemical elements. Hang on to your guy ropes.

Ask your learners to imagine they are heading out on a camping expedition and need to carry everything with them, including the fuel for cooking. Given a choice of two different fuels can your learners design an experiment to find out which is the best? They should consider how quickly the fuel can boil water and how much fuel they will need to carry.

Download Which fuel is better? from In search of solutions  with student sheet, teacher instructions and technician notes as MS Word  or pdf.

Once you’ve got your campfire going, you can use it to boil and purify water. Likewise, water purification tablets, developed for soldiers during the second world war and long used by campers and hikers, can destroy most biological contaminants. Nowadays, there is another option: a filtering water bottle – a backpack-friendly, miniaturised form of the elements of a modern water treatment plant.

Manufacturers like US-based ÖKO claim some of the technology for their filtering water bottles was originally developed by Nasa for water recycling aboard its spacecraft. The fact that these types of technologies are now available in a consumer water bottle is probably just due to their falling price, says water treatment expert Peter Jarvis from Cranfield University. ‘Costs have come down and there have been technology developments that enable us to use these processes at the smaller scale,’ he says. 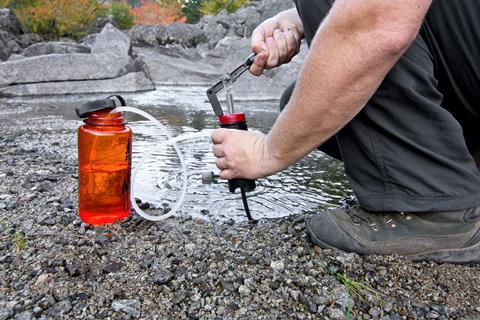 In large-scale water treatment, contaminants are removed by adding chemicals that cause solids to clump together and settle out. Later on, the water might be filtered through a material like activated carbon, which is processed to make it very porous. Instead of the initial settling step, some of these hi-tech bottles use very fine membranes to filter out biological contaminants in untreated water. Others use activated carbon or both. As Peter explains, activated carbon adsorbs – takes out – certain undesirable chemicals, like pesticides. ‘It’s kind of a polishing process to remove some of the nasty organic chemicals that may be present in a water source,’ he says.

You need to carry back-up cartridges for filtering bottles because they must be changed every so often, but the very fine filters can deal with dangerous organisms such as Cryptosporidium and Giardia, which both cause diarrhoeal disease. Other bottles incorporate a UV light, which disinfects the water by damaging the DNA of the contaminating organisms, but usually without the filter. Some chlorine-based water purification tablets, by contrast, don’t work against these organisms or require a long waiting time to kill them.

Peter’s own research currently includes disinfection by using UV LED lights, which may eventually be used in filtering water bottles. ‘One of the areas that we’re looking at is these point-of-use devices,’ he says.

Learners are presented with the scenario that their aircraft has just crashed in the desert, and the last cupful of water has been spilled on the dry sand. The survivors immediately scoop up the wet sand and put it into a plastic bag. Ask your learners how they can get that vital water back. They have just 90 minutes before they die from dehydration …

Download Desert survival from In search of solutions  with student sheet, teacher instructions and technician notes as MS Word  or pdf.

Many of us use waterproof clothes like jackets and trousers for years without realising that the waterproofing might wear off. What we don’t understand is that the waterproof element comes mostly from an added chemical component that has to be replenished and not from the material itself. The same goes for tents. So, of course, re-waterproofing your outdoor gear is going to be especially important if you’re due to be spending the aforementioned wet weekend in Wales. 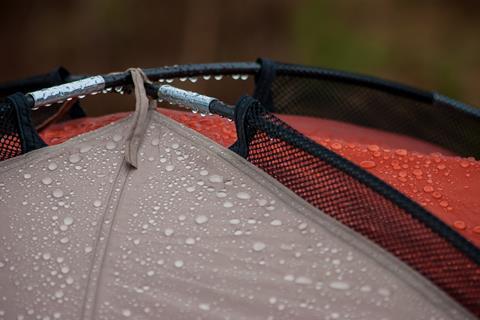 A completely waterproof tent is a must when camping

Although some textiles, like Gore-Tex, do have a degree of built-in resilience to moisture owing to their construction, even these require water-repellent chemical finishes to give them a boost. Currently, the finishes that most manufacturers depend on are fluorine-containing chemicals. Richard Blackburn, a sustainable materials expert at the University of Leeds, explains that they work by changing the fabric’s surface energy – also known as surface tension – to minimise its interaction with any liquid. ‘If you get minimal interaction then [the water] will bead up on the surface and roll off,’ he says. ‘Nature does that physically, for example, by presenting hairs on a lotus leaf. We do it with chemicals that do a similar thing in terms of presenting a surface that water can’t interact with.’

Unfortunately, these fluorine-containing chemicals are harmful to the environment and it’s also inadvisable to breathe them in – they should really be applied in the equivalent of a fume cupboard, Richard says. So if you want to choose greener gear, look for manufacturers that use non-fluorinated finishes. Good chemical alternatives are silicones and even some fairly simple hydrocarbons.

These newer, non-fluorinated chemicals do a very similar job, the only downside being that their repellent properties are limited to water – the more traditional fluorinated chemicals also repel oils and stains. Richard thinks the older finishes are over-engineered because the added benefits are rarely needed. ‘We did a survey of about 1000 hikers and people who do outdoor sports and very, very few had any expectancy of oil repellency or soil repellency. It was basically: ‘as long as it keeps me dry, that’s all I’m worried about.’

Before fridges, solar or air-drying of foods was one of the most reliable methods of preserving excess, and when we venture into the great outdoors we have to survive a bit more like our ancestors did. At home, our cupboards may already be stocked with sultanas, freeze-dried fruits in breakfast cereals and perhaps packets of instant potatoes and stuffing, but we can also think more widely – dried meats, such as jerky and fish, like Icelandic harðfiskur.

Removing water from food helps to preserve it by preventing microbes from growing and it also takes a lot of the weight out of it, which is exactly what you want if you’re carrying it on your back. But this change in composition dramatically alters a food’s texture. ‘When one product is dried, a different product is obtained,’ says food processing expert Cristina Luisa Silva from the Catholic University of Portugal in Lisbon. Think of chewy sundried tomatoes or packets of crunchy noodles and vegetables. Rehydrating dried products does soften them but usually won’t give them back their original structure, elasticity or taste, though some drying methods give better results than others. 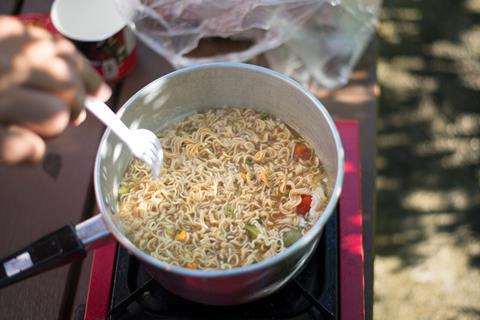 Backpack essentials: quick and easy meals to cook over a campfire

Today, drying is an industrial business and there are a multitude of methods. Often, pretreatments, such as blanching or ultrasound are applied to speed up the process or improve final quality. Then foods may undergo spray-drying (using hot gases, such as for drying milk) or belt-drying (on a ventilated conveyor belt). Freeze-drying or lyophilization  is popular and preserves flavour quite well. It requires rapid freezing to prevent large ice crystals from forming and damaging cells. Water is removed under low pressure and heat by sublimation, meaning it turns directly into vapour. For mixed dehydrated foods, such as soups and meals, Cristina explains that the different ingredients are usually dried separately and then mixed.

Describe a situation to your learners where they are on a survival course with powdered potatoes and packet soup to eat but they have run out of water to rehydrate them. While exploring their surroundings they come across a dirty pond and some discarded lab equipment. Can they make the pond water clean and safe to drink?

Download Water for survival from In search of solutions with student sheet, teacher instructions and technician notes as MS Word or pdf.

What about the nutritional content of dried foods though? If you intend on camping regularly, will your diet suffer? ‘Drying normally uses heat and therefore some nutrients are lost,’ Cristina says. ‘But, on the other hand, the products become more concentrated.’ She adds that dried fruits, like apples, dates and plums, can be rich in nutrients.

You can, of course, dehydrate your own foods, like our ancestors did. Start with the easy stuff like mushrooms or herbs, and then move onto fruit leathers – pureed fruits that are air- or oven-dried and cut into strips – and even whole meals. For those who really want to experiment, a tabletop dehydrator may be the way forward. Sharing some of these delicious creations around the campfire will doubtless make for happy campers.