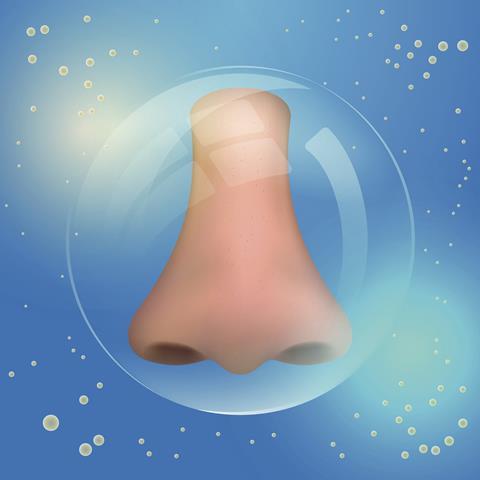 Tell someone you teach chemistry and it’s likely their first response will – more often than not – be along the lines of how badly the labs smelled when they were at school. Just the thought of that smell can bring back strong memories of lessons and sometimes, those people can recount what they were doing and learning, however long ago. Amazingly, there is increasing evidence1,2 that if someone is able to recollect a smell, the memories made at the time can be recalled much more strongly.

It may surprise you to know that using the sense of smell to recall memories is not a new concept. In the late 19th and early 20th centuries, actor and theatre practitioner Konstantin Stanislavski developed an acting method using emotional memory. Stanislavski’s method involves an actor recalling sensations they felt when in a similar position to the character they are playing. By thinking about the smells, touch, tastes, sounds and sights, the actor is able to produce a much deeper emotion onstage. Could this be explored or even exploited in the classroom?

This idea of smell being linked to memories led to a project within the Royal Society of Chemistry’s Educational Techniques Group (ETG). One of the ETG’s first tasks involved creating a collection of interesting smelly chemicals. The group took on a summer intern who helped produce a trial pack, which was sent to several schools. After having some fun, the group discovered a serious side to the project and developed it into several different strands. Alongside this, there has been a growing interest in how smells can be used to support the teaching and learning of chemistry. The group’s smell-related resources are available through the Learn Chemistry website.

With an International Year of Chemistry legacy grant, the ETG created a new resource for teachers – Chemistry Stinks, a kit to help explore smells. The kit contains chemicals with distinctive odours ranging from the pleasant to the pungent. 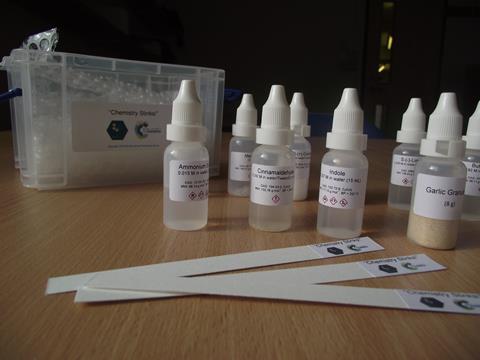 Chemistry Stinks packs have been used for a variety of activities, from classroom education to outreach. Outreach activities undertaken by group members include a smelly challenge in which members of the public had to try to identify a number of mystery smells. The different smells generated memories and associations and led to some interesting discussions about where and why we come across them. Incense oils can be used, but the activity can be made more challenging by using scented candles containing a combination of scents to see if anyone can identify the different components – the true skill of a perfumier! 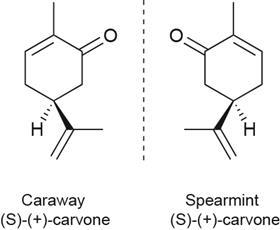 Some teachers have been using the packs to help students understand optical isomerism. Two of the chemicals in the pack exhibit optical isomerism. While the smells of each isomer are similar, it is usually possible to distinguish the isomers from each other. Carvone produces the aroma of spearmint with the R-(–) isomer but the aroma of caraway with the S-(+) isomer. This can be used to demonstrate that while their chemistry is the same in a non-chiral environment, the isomers behave differently in a chiral environment, such as the olfactory system.

Chemistry Stinks in the classroom

There are two resources on Learn Chemistry for the Chemistry Stinks pack that the Educational Techniques Group has created. Firstly, there are instructions for creating your own smelly chemistry pack. This can be used for a variety of ages and for a number of different activities. Younger pupils are fascinated by the compounds’ structures – I often use the pack as a fun activity to introduce the concepts of atoms and molecules. Getting pupils to record their observations can be very powerful. It encourages them to realise that observations can be so much more than what they see and can include other physical properties. It’s a great eye-opener for younger groups.

Other suggestions have been simply to use each scent to create a different smell in the classroom each day because by having a smell present, the pupils’ learning is improved. I’ll admit this sounds odd at first, but on further investigation, there is some evidence to suggest it works.

The other resource that the group has developed for Learn Chemistry is the olfactory indicator titration. I’ve been using this for the past year in my sixth form teaching. Some pupils had found it difficult to grasp the concepts involved with redox titrations – they struggled when an indicator wasn’t used. By getting them to use the garlic indicator, I’ve seen several students have flashes of realisation and their understanding of a more abstract concept has improved. With year 7, I used a more basic version of this practical, which worked well to break down the common misconception that acids are red and alkalis are blue. It also helped to demonstrate that in different environments, compounds have different properties, which can be distinguished visually or even by smell.

How we learn smells

The ability to identify smells is learned by experience. As a child smells an orange, they relate the smell to the fruit, which means that a visual association is needed for proper identification. This occurs by a sensory convergence in the brain’s orbitofrontal cortex. Visual memories are evoked by smells because when the olfactory bulb (which is located in the brain and transmits information about smell from the nose to other areas of the brain) is stimulated, it pulls visual images from the occipital lobe (the visual processing centre of the brain) via the temporal lobe (which processes sensory input). The olfactory bulb stimulates many areas of the brain, for example the limbic system (responsible for learning and motivation), the temporal lobe (explicit memory and hippocampus memory formation), and the orbitofrontal cortex (responsible for reward association and sensory convergence), which allows a direct connection to the object. Since olfactory stimuli activate motivation in direct relation to our evolutionary drive for food and therefore survival, the identification of potentially harmful or healthy smells has a powerful ingraining effect. 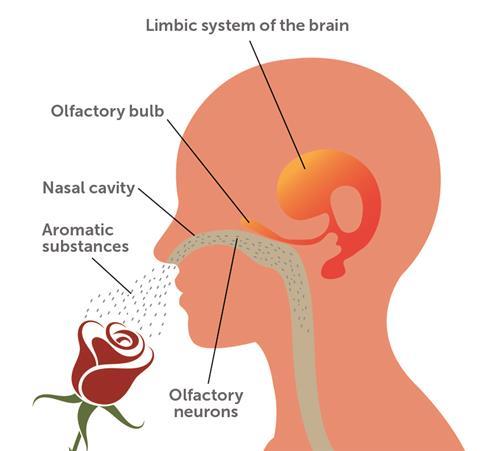 As an aroma compound dissolves in our nose mucosa – snot – it binds to a receptor in the mucosa, which then changes its structure according to the aroma compound’s structure. This information is transmitted to the brain by a neuron. Each neuron is encased with glycosaminoglycan, forming an electrostatic polymeric anionic hydrogel called a neural extracellular matrix. This binds to metal cations in the brain (for example Ca2+, Cu2+, Fe2+/3+, Mn2+/4/+5+), cross-linked by the enzymes transglutaminases, and creates chelated moieties with varying bond structures: sp3 (tetrahedral), d2sp3 (square planar) and d2sp3 (octahedral).

The moieties form a lattice structure and transmit their energy of formation3 through a ligand-gated ion channel opening – a group of transmembrane ion channel proteins that allow ions to pass through a membrane in response to the binding of a chemical messenger. This allows an influx of Ca2+ and Na+ ions, creating electrical impulses that activate the aforementioned regions of the brain, releasing the neurotransmitters glutamate (memory), acetylcholine (memory and learning), and norepinephrine (learning). Then the information is stored in the memory with the visual association by sensory convergence, similar to a digital photo forming a copy of a photographed object.4

When familiar smells are encountered later, the olfactory bulb picks up the smells as usual. The same electrical impulses as before are created, activating the associated senses and recalling, together with the smell, the memories that were formed. Using olfactory/visual association stimulates the reward system by exciting areas commonly associated with learning including the amygdala (part of the limbic system responsible for processing memory, decision making and emotional reactions), hippocampus (part of the limbic system that consolidates information from the short-term memory to the long-term memory), temporal lobe and orbitofrontal cortex. The excitation causes excretion of adrenaline, glutamate and dopamine. These learning and memory neurotransmitters increase activity and therefore blood flow in the regions mentioned. Since olfaction and visual memory are closely linked through the temporal lobe, the memory is long-lasting. The excitation of the other regions also gives the memory emotional association, further embedding it. This means it can be useful to engage all the senses in a learning environment.

Breaking away from the visual 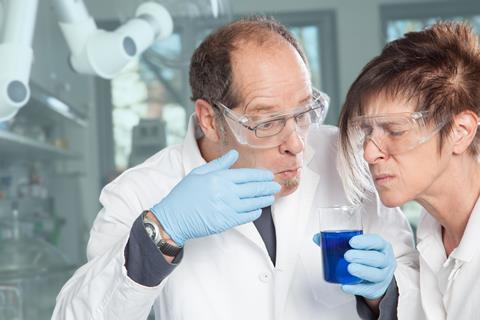 Many pupils find it difficult to grasp concepts that they can’t see. Trying to see differences in compounds and explaining why they have different chemical properties can be difficult. It can help to introduce the idea that some compounds have differences that you can’t see on a physical level.

One practical experiment that the ETG found and developed was using smell as an indicator in a titration. The smell of garlic becomes much richer at the end point of an acid–base titration. The practical proceeds with exactly the same method as a standard titration, but rather than looking for a colour change, pupils waft the odour towards them until they detect a change in smell. While the end point is less clear using smell rather than a visual indicator, the experiment can be used to help students understand that not every change needs to be seen with the eye.

School teachers can easily create their own Chemistry Stinks pack using the ETG’s suggestions on Learn Chemistry. This can make for a nice introduction into a wide variety of different topics (we have seen the pack being used to help introduce functional groups and infrared spectroscopy) and shows pupils that compounds that appear to be similar physically can have different properties.

The Educational Techniques Group is always looking for new members that are interested in developing new ideas. Find out more at rsc.li/2h1NiSw or follow us on Twitter, @Edtech_RSC