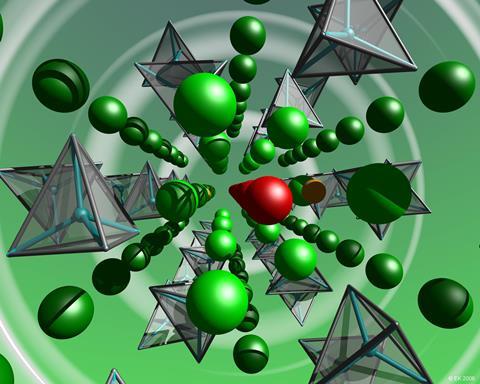 The world’s population is growing, meaning we need more and more energy to drive our cars, light and heat our homes, and power our high-tech gadgets. To produce this energy we mostly burn fossil fuels, but our supplies will start to run out in the next few decades. Fossil fuel energy also comes at a cost, producing the greenhouse gas carbon dioxide which has been blamed for changes in the global climate.

We will need cleaner, sustainable ways to generate and store energy, and we will need them soon. Chemists are playing their part in helping to develop the clean energy technologies that could allow us to kick the fossil fuel habit, before we run out for good.

‘One single technology will not be the solution.’ says Saiful Islam of the University of Bath, UK, a chemist working on materials for the next generation of sustainable energy production and storage devices. ‘The performance of the devices relies on the materials,’ he says, so materials chemists can develop our understanding of how these materials work and in turn, help design better devices.

Chemists have already provided one great advance by developing the thin, small, light, but powerful rechargeable lithium batteries that power our mobile phones, laptops and other gadgets. According to Saiful, the next challenge is to make even more powerful, faster charging versions to run electric cars. 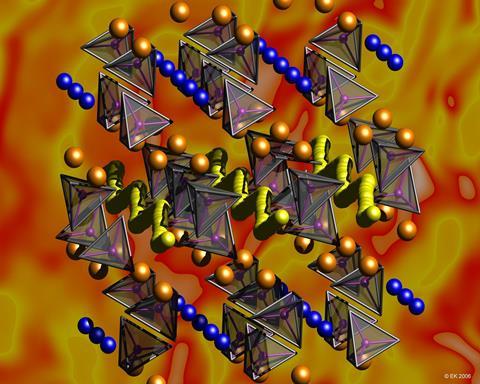 He describes the classic lithium battery as being like an electrochemical sandwich, where the ‘bread’ is the electrodes, and the ‘filling’ is the electrolyte. When the battery is plugged in to charge, lithium ions (Li+) move from the positive electrode (cathode) through the electrolyte to the negative electrode (anode). As it does this, Li+ captures electrons from the power source, and stores their energy. In the charged battery, the lithium is ready to move in the opposite direction (anode to cathode), releasing the electrons giving power to whichever device is connected.

Most batteries currently use cathodes made of LiCoO2, but Co is expensive and toxic. To make batteries more powerful, affordable and safe, better cathode materials are needed. Saiful says the ‘hottest’ candidate, already being used in some new electric cars, is LiFePO4, which is cheaper and contains strong P–O bonds making it safer for use on the road.

He believes there is still room for improvement in battery cathode materials and explains that their operation relies on efficient transport of lithium ions. ‘We are trying to understand how this happens, on an atomic scale, so we can maximize the lithium diffusion properties in new materials,’ he says.

Li+ is a very small and light ion, making it difficult to pinpoint in a crystal using standard experiments with beams of x-rays or neutrons. So his group turns to what he describes as ‘virtual microscopes’: powerful supercomputers. ‘We know the physics and chemistry of the structure and bonding, so these rules can be used to calculate the forces within the material,’ he explains.

Saiful’s research group used the supercomputers’ number-crunching to calculate the paths of lithium ions through LiFePO4, with a surprising result: ‘We were the first to predict that it does not go in a straight path, but in curves,’ He said. This is very valuable information to help understand how the electrode works and to develop new, better materials.

The efficient, powerful batteries of the future will still need a clean source of power to charge them up. Solid oxide fuel cells (SOFCs) generate electricity from hydrogen and oxygen, and produce only water as a by-product. Like lithium batteries, they too are made up of an electrolyte sandwiched between two electrodes. At the cathode, oxygen gas picks up electrons and is reduced to oxide ions (O2-). The O2- ions then migrate through the electrolyte to the anode, where they react with hydrogen gas to form water, generating electrons that flow back around an external circuit towards the cathode providing useful electrical power that can be used for homes and other buildings. 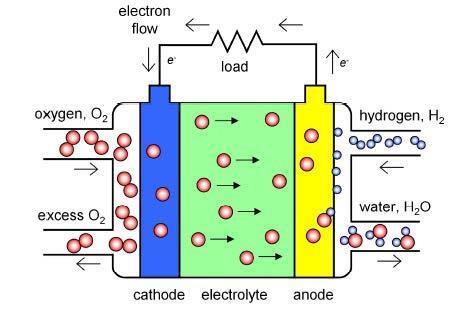 ‘The key material in the fuel cell is the electrolyte,’ says Peter Slater of the University of Birmingham, UK. They are usually made from inorganic, crystalline materials that need very high temperatures (above 800°C) to operate. Part of the challenge for chemists is to find new materials that can operate at lower temperatures (approx 500–700°C), so they may become cheaper to run and more durable.

Peter’s team prepare new electrolyte compounds with built-in channels between the atoms, to guide the O2– through the material. They compare the materials they make by measuring the conductance, or how fast the O2– flows through. They also examine how the conductivity changes at different temperatures, and in different atmospheres such as air or hydrogen.

Peter and Saiful’s teams work together in the search for ideal electrolyte materials. Saiful’s calculations reveal the exact path the ions take through the materials Peter’s team produce. ‘It’s important to understand why certain materials conduct ions well, so we can learn how to make better materials,’ he says.

He compares moving O2– through the electrolyte to trying to get from one side of a packed concert hall to the other. One way is to keep some ‘seats’ empty, so there is always a space to move into. This can be done by introducing defects where a few O2– ions are missing from the electrolyte crystal. But the two teams have shown that some structures also have room for the O2– to squeeze through gaps between atoms, like someone pushing their way between full rows of seats in the hall. Understanding how oxide ions travel through electrolyte materials will help chemists to design better fuel cells.

SOFCs are a promising source of clean energy for buildings, but they can’t provide for all our needs. Renewable sources such as solar power will also have a role to play in providing us with cheap, clean energy. More energy from the sun strikes the surface of the earth in an hour than the entire population of the planet needs in a year. Finding materials to cheaply and efficiently turn more of this energy into electricity is one of the biggest prizes for materials chemists. 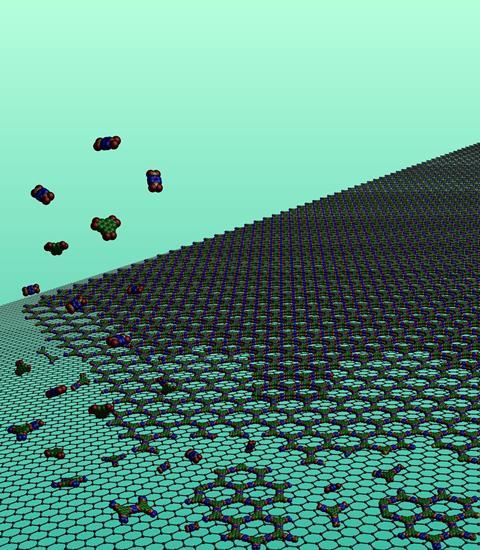 Solar cells are another kind of electrochemical sandwich. This time, the light absorbing material forms the sandwich filling between two electrodes. In commercially available solar panels that you can see on the roofs of buildings, the filling is semiconducting crystalline silicon. This material works because its electrons are free to absorb the sun’s light energy and move into a high-energy state. The excited electrons carry a negative charge, while they leave behind positive charges called ‘holes’. These opposite charges can migrate to opposite electrodes, creating a voltage and giving electrical power.

But manufacturing the silicon into solar cells is extremely expensive because of the high purity needed: even one atom of impurity can affect performance. However, the electronic structure of semiconducting silicon can be replicated using other semiconducting materials, such as nanoparticles of cadmium telluride (CdTe), or even polymers which contain a large number of alternating single and double carbon to carbon bonds.

These materials work as solar cells but are not as efficient as silicon and are currently much more expensive. The task of making them better and cheaper ‘really goes to fundamental control of their chemistry,’ said William Dichtel of Cornell University, New York, US. First, he explains, they need to be designed to absorb a wide range of wavelengths of light. Next, the material must have a way to keep the electrons and holes apart so they can migrate to the electrodes. ‘These are simple processes, but new materials need to do them well,’ he said. He points out that chemists can contribute a lot to the search for light-absorbing materials, because they have been designing coloured dyes for hundreds of years by using different arrangements of C=C and C-C bonds.

Wei You of the University of North Carolina describes his group’s approach to this challenge as like molecular lego, building with different structures that all contain alternating C-C and C=C bonds. ‘You can make whatever you like, putting the building blocks together, understand what works well, and use this as a rationale to make them better,’ he says.

Building up these blocks into long polymer chains means they can easily be processed into thin sheets like clingfilm, using processes that are already used for conventional plastics. Plastic solar cells also do not require the same purity as silicon in manufacturing, keeping costs lower. These lightweight, flexible solar panels of the near future would be highly portable, and could be built into many more settings, offering free power even when we are on the move.

Another important challenge for materials chemists in solar power is to control how individual molecules combine with one another in the solid state. This is as important to the solar power material as the structures of the molecules themselves. The charges generated by light have to be able to hop easily from one molecule to the next on the way to the electrodes. If the molecules are randomly ordered, the charge hopping will be restricted.

William Dichtel’s group tackles this problem by designing large three-dimensional networks of light absorbing units joined by covalent bonds to lock them in place. Other researchers try to make their molecules or polymer chains line up in an orderly fashion by adding specific groups to the molecules to control the forces between them. His materials also have built-in spaces to accommodate a second material that can accept the excited electrons and channel them to the electrode.

‘It’s unclear which type of material will win out’ in the race to replace silicon solar cells, he says. Polymers, nanocrystals, or hybrid combinations are all vying to be the best, but he believes they will all be useful: ‘there will probably be enough niche applications suitable for all of these technologies’.

This article was originally published in InfoChem, the Royal Society of Chemistry’s magazine for chemistry students.