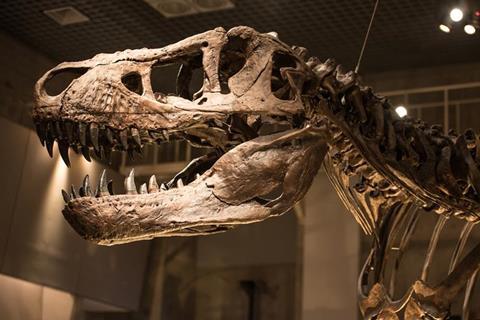 Dinosaurs – carnivore or herbivore? There are ways to find out what a dinosaur ate for dinner

Life on Earth has gone through a lot, and the plants and animals we see today are just a snapshot of all the lifeforms that have ever inhabited this planet. Life evolves into other forms, creating new species, and some species just die out altogether. In fact, according to some estimates, most species – 99.9% – that have ever lived are now extinct. For animals, the most well-known example is surely the dinosaurs, a group whose mass extinction is still the subject of much research, but there are many other groups of animals that once roamed the Earth but are now extinct. These animals may be long gone but we know that they did exist because of the clues they have left behind – most obviously their bones, which you can find reconstructed in museums throughout the world. With this information, palaentologists can build a picture of these ancient animals: how big an animal was, how it moved, if it was a predator or prey. However, knowing for certain how these animals lived is almost impossible because we cannot observe them directly. But there is a small corner of palaeontology research that can help to put some flesh on those bones: coprolites.

‘Coprolites are fossilised faecal material, basically fossil poo,’ says Fiona Gill, a scientist at the University of Leeds, UK, who is making a career of using coprolites to study ancient animals. That’s right: poo. There’s no polite way of saying it. Well, apart from coprolites, obviously. And if you know some Greek, then it’s not all that polite either – the name literally means ‘dung stone’. ‘[Coprolites] can tell us a lot about how ancient, extinct animals lived,’ says Fiona.

Animal remains, particularly mineral-rich parts like bones and teeth, can over the course of time become preserved by natural processes – they become fossilised. And just as an animal’s skeleton can become fossilised, so too can its dung, preserving a record of what that animal ate for centuries to come. This makes coprolites unique specimens in the fossil record because they provide direct information about an ancient animal’s behaviour, and not just what it looked like.

The largest coprolite ever found belonged to a Tyrannosauraus Rex. It measures about 30 cm in length and weighs around 7 kg.

For as long as people have been finding the remains of ancient animals, they have been finding coprolites too, but to begin with they weren’t correctly identified – people thought they were lumps of indigestible material or even stones eaten by animals to help with digestion. In the early 19th century, a fossil hunter called Mary Anning spotted that these ‘stones’ were often found in the abdominal region of dinosaur fossils. And when she broke them open, many contained fish bones, which led her to realise their true nature. This discovery gave science its first glimpse into the life of ancient animals. However, at that time, the information they could get was restricted to what could be determined from just looking at them – fragments of bone or fur in the coprolite might indicate a carnivorous diet, for example. Today, analytical science has come a long way and now scientists like Fiona can now use sophisticated techniques to find out what was on the menu down at the molecular level. 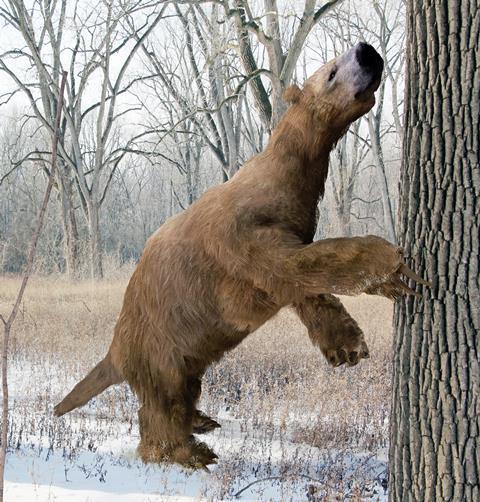 Giant Sloths lived around a million years ago

Much of the food we eat is broken down and absorbed by our bodies, but not all of it. Some of the food will pass through our digestive system relatively unchanged, leaving a molecular trail that leads back to what we ate. In coprolites, the fossilised faeces preserves these chemical signatures unchanged for hundreds of years. Looking at the molecules in a coprolite, Fiona focuses on identifying these ‘biomarkers’ to learn a variety of things about ancient animals. ‘The first and most obvious one is the diet,’ explains Fiona. ‘That can be on a very general level – is it a carnivore or herbivore – or sometimes very specific. You might be able to pin it down to a plant family.’ In fact, that is exactly what Fiona managed to do with a giant sloth coprolite. Giant sloths lived around a million years ago and were much larger than today’s sloths – about the size of an elephant. Fiona found a compound called epismilagenin was present in the coprolite in large amounts and she began to hunt for the source of this molecule, which required a fair bit of detective work. ‘It took us quite a while to find out what it was and where it came from,’ says Fiona.

Because giant sloths aren’t around anymore, Fiona has to use knowledge of modern animals and plants as a guide. ‘When we looked into it, we found that there are only two compounds that produce epismilagenin when they are digested.’ And, as it turned out, there are only 20 plants that produce those compounds, two of which – yukka and agave – just happened to grow right in the area where the giant sloth coprolite was found. ‘So we were able to conclude that the sloth’s diet must have been very rich in either yukka, agave or both,’ Fiona continues. So while an animal’s skull and teeth might suggest if an animal was carnivorous or herbivorous, evidence from coprolites can pin down exactly what an animal was actually eating. Biomarkers are also the best way to tell if something is a coprolite in the first place, and not just a funny rock. ‘If it contains 5β-stanols [a molecule found in plant cell membranes] then it’s a coprolite,’ Fiona explains. 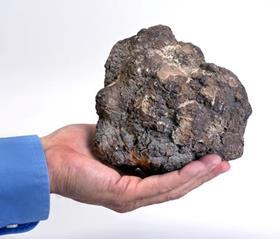 Not all coprolites find themselves in the hands of scientists. The fossilisation process often produces striking colours and patterns within the coprolite, which has led to them being used in jewellery. You really can make jewellery out of anything!

But coprolites go far beyond diet. They not only contain evidence of what was eaten but they can also show what happened to the food as it was eaten – something that would be impossible any other way. For instance, herbivores have evolved two different digestive mechanisms to help them break down the cellulose in plant cell walls. Both rely on using bacteria to help with digestion but they differ depending on the point where the food is given to microbes: before it reaches the stomach or after. These two types are called foregut and hindgut fermenters, respectively, and these two different processes give different biomarkers in the faeces, depending on the bacteria present. ‘That’s the bit I’m most interested in,’ Fiona adds, ‘you can find evidence of the digestive tract microbial community.’

Again by studying modern animals, Fiona discovered that a biomarker, archaeol, was found only in the faeces of foregut fermenters. This could help identify what sort of digestive process ancient animals used. But archaeol has another potential use: it is produced by a certain type of bacteria called methanogens – bacteria that produce methane. Fiona found a relationship between the archaeol in faeces and the amount of methane an animal produces, and this could be used to calculate how much methane is produced by animals around the world, just by measuring how much archaeol is in their faeces. ‘The ultimate goal would be to be able to get an estimate of how much methane an extinct animal might have produced,’ says Fiona. So the information contained in a coprolite could even help us understand what the Earth’s climate was like when an extinct animal was alive. Around the time that huge animals (megafauna) like the giant sloth were roaming the earth, for example, it is thought that the Earth’s climate was much warmer. It was suggested that the start of a brief ice age was caused by the extinction of certain megafauna that were pumping out vast quantities of methane, Fiona explains.

Message from a viking

And of course, it’s not just animals leaving their poo to posterity – human coprolites can also be found. In 1972, a coprolite was found in the UK by archaeologists excavating the ancient Viking settlement, Jorvik, in what is York today. At seven inches, it’s thought to be the largest human coprolite ever found. Analysis showed that whoever left this behind ate mostly meat and bread and also revealed something about their digestive tract: hundreds of worm eggs in the coprolite suggesting the owner was riddled with worms. It even prompted one scientist to exclaim: ‘This is the most exciting piece of excrement I’ve ever seen.’ The coprolite has since been displayed at the Jorvik Viking museum.

It’s hard to imagine one’s own deposits being treated with such reverence. These days our household plumbing and sewage treatments remove all trace of our own faeces, keeping the fossil record clean. But if you’ve ever been caught short and had to go like the bears do (or the Vikings did), then maybe one day scientists will be breathless with excitement at finding what you’ve left behind.

Finding out what’s in a coprolite requires all the tools of analytical chemistry: extraction, separation and identification. Fiona crushes up the sample and uses organic solvents to extract the organic molecules (these molecules will dissolve in organic solvents but not in water). The samples contain lots of different types of chemical so this jumble of molecules has to be separated out using chromatography. This involves passing the samples through a column in which the different molecules travel at different speeds. Then, once the different molecules have been separated, analytical techniques such as mass spectrometry are used to find out exactly what those molecules are.

Learn more about using analytical chemistry to solve archaeological puzzles with this article from Chemistry World.