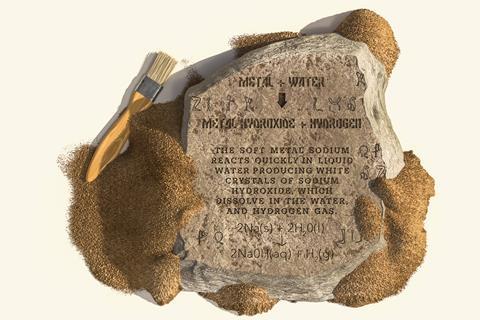 Stretching way back to its alchemic origin, chemistry has always used symbolic language. Medieval alchemists used a combination of symbols, pictures and allegorical language in their texts to depict detailed chemical knowledge and practical processes. However, these texts were often designed to conceal rather than communicate knowledge, so much so that only the most learned were able decipher their hidden wisdom.

It’s well documented that students struggle with chemical symbols, despite continued and extensive use in lessons and teaching resources. Why does contemporary chemistry education apparently fail to demystify chemical equations and formulas? The answer lies partially in the chemical symbolic language itself and partially because it is one of many interlinked ways of communicating and presenting knowledge to our students during chemistry lessons.

How chemical symbolic language has evolved

Symbolic language, in a form that the modern chemist would recognise, has been in use since the early 19th century when it was introduced by the Swedish chemist Jöns Jacob Berzelius. He wanted to avoid using long-winded or confusing names to express the quantitative elemental composition of substances by using a symbolic language that could be easily understood and remembered. He did this by replacing Dalton’s element symbols with the first or first two letters of the Latin name of the element, combined with mathematical notation. In later versions he removed the + sign and, later still, superscript numbers were made subscript to avoid confusion with mathematical powers. For example, S+2O was first changed to SO2, and later changed to today’s SO2.

The nature of chemical knowledge means we can only ever partly describe or explain chemical phenomena using everyday words. During any chemistry lesson we make use of multiple modes of communication and meaning-making resources (resources which help students make sense of a situation, phenomenon or concept, by drawing on their knowledge and experience). We combine the everyday spoken and written word with scientific language, along with drawings, gestures, diagrams, graphs, maths and practical work. Each of these is designed to help our students construct their understanding of the chemistry, and each is a vital part of what can be described as a chemical meaning-making ensemble. These combinations of words, symbols, pictures, etc can be seen in many chemistry textbook illustrations. Chemists and teachers may move seamlessly within this grouping but, for the student, it may prove as indecipherable as any alchemic text without the necessary support.

Think about a simple demonstration such as burning magnesium. We observe bright light, white smoke and leftover ash at the end. Not obvious from these macro observations, is that the magnesium is reacting with oxygen to form magnesium oxide. If anything, it looks as if something is being released from the burning magnesium, so we must help students move beyond these real-world observations by translating them into scientific language. This allows us to introduce substances and processes not directly observable.

This scientific language can be further translated into a word equation and then a symbol equation. And so, this introduces additional information such as mathematical processes, the composition of substances and the molar ratio of reactants and products, along with submicroscopic concepts.

As we move through these different descriptions of chemical phenomena, more and more chemical knowledge is condensed into the resulting balanced symbol equation. This results in the formula and equation having multiple meanings, which can be macroscopic, submicroscopic, mathematical and reactive. 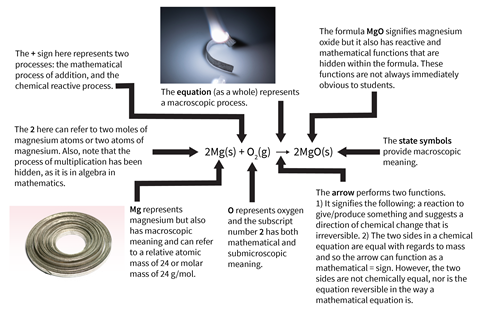 Using symbolic language in the classroom

Chemical symbolic language provides a unique system for condensing and communicating multiple meanings between chemists. Becoming fluent in this language and grasping its multiple meanings is part of what it means to become a chemist. Chemists and teachers of chemistry have a well-developed understanding of these multiple meanings and can move easily between them. However, for students this movement can be far from fluent, and the multiple meanings may well be hidden from them and hence cause confusion.

An ancient Chinese aphorism says, ‘When a wise man points at the moon, only the fool looks at the finger’. Despite our best efforts, our students sometimes look at the finger rather than the moon when presented with formulas and equations, resulting in them constructing a different meaning than intended.

Although chemists use chemical symbolic language to communicate, teachers should think carefully about how appropriate it is as a teaching resource and how to use it during lessons for 11–16 students. Consider, for example, whether using a formula or equation is suitable in the context of a lesson. And, if so, think carefully about their purpose, helping students to understand the intended meaning by translating and unpacking the symbols.

Three important questions to consider when using formulas and equations in class:

Ollie Hunter is a chemistry teacher, head of department, EPQ coordinator and part-time doctoral student at the University of Cambridge

Ollie HunterOllie is head of chemistry and EPQ coordinator at Benenden School and a part-time EdD student at the Faculty of Education University of Cambridge.