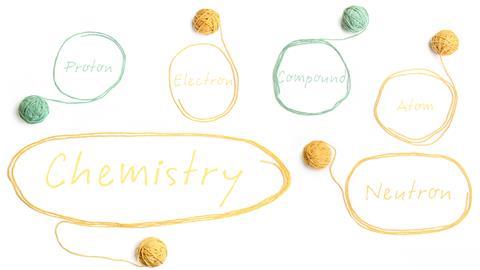 Why chemists say ‘mole’ might seem only interesting trivia. Actually, it helps students understand science and own their learning

Language pervades all we do in education. It is in the textbooks and in the teacher- and pupil-talk we encounter every day. We use language to manage activities in our classrooms and present curriculum content. Through language, students display their understanding and are evaluated in exams. It is so ubiquitous that its importance, rather like the air we breathe, is taken for granted. But take it away and everything soon becomes very difficult.

As language is central to the learning process, it is worthwhile stopping to think how subtle differences in its use can impact students’ learning. The language used in class will reflect (often unconsciously) views on the nature of chemistry and science, and also views about the teaching and learning process.

For example, imagine you are introducing your students to carbon dioxide gas. You may tell your students, ‘in 1756 Joseph Black discovered carbon dioxide gas by heating calcium carbonate’. This seems a benign statement, and it’s not incorrect. However, the over-exposure of our students to statements like this paints them an unrepresentative picture of the nature of science. It also misleads students about how chemical ideas and understanding develops in professional laboratories and in the classroom.

The human side of science

In some respects, the purpose of the scientific community is to generate universal statements. However, simply reporting these statements to our students could reinforce a commonly held perspective: science is an unproblematic description of facts that pre-exist ‘out there’ waiting to be discovered through objective experimentation and careful observation. This encourages the view that ideas in science are certain, universal and exist independent of scientific theory and social or cultural influence. It also suggests ideas develop in a straightforward, logical manner from evidence to theory. Teaching from this viewpoint means transmitting objective, self-evident, logical truths and facts for the student to receive and accumulate through a neutral system of descriptive language.

An alternative view of science and chemical knowledge construction recognises it as an active human and social process. Science involves interpreting natural phenomena and the continuous social negotiation of its meaning. From this viewpoint, language is not a medium for description and transmission of fact, but a creative tool for interpretation. Language allows us to make sense of new experience and try out new ideas. Human thought, imagination and language are all important for new knowledge.

As chemistry teachers we aim to help our student construct their own chemical knowledge. A more social view of science and language recognises the beginning of this process is always personal and human. This view also sees the nature of our ideas and hence the language used as speculative, tentative, figurative and metaphoric. Allowing students to voice tentative knowledge about new chemical ideas using their own prior ideas and language – ‘I think it might be … because … ’ – helps them. Especially if the students, having written down their ideas, are able to return to them periodically to review and reconstruct their knowledge as their experience and confidence grows.

Making it up as they go along

Alongside any new knowledge there has to be a development in language – new ways of interpreting the world require new ways to talk about it. New language often reflects currently held ideas and theories and is based on available language. Michael Faraday consulted the Oxford poet and mathematician William Whewell when developing his understanding of electrolysis. William Whewell coined the terms anode, cathode and ion in 1834. At that time, these new words, like all new scientific words, were figurative and metaphoric, and could even be described as poetic.

In fact, the poet Samuel Coleridge was fascinated by chemistry. When asked why he had attended a whole series of Humphry Davy’s lectures, he replied ‘To improve my stock of metaphors’.

Over time, chemical knowledge moves from being tentative thought, to accepted fact, to tacit knowledge. At the same time, the corresponding language moves from a figurative or metaphorical description to explain and persuade, to a technical term within an extensive specialist vocabulary. The original figurative or metaphorical meaning of technical terms is often forgotten. For example, do you know why chemists use words such as ‘mole’, ‘base’ or ‘titre’?

Examining the etymology of chemical vocabulary unpacks the ideas behind the words. To students meeting these words for the first time, they must seem strange and often counter-intuitive. Why do we continue to use the word ‘reduction’ especially when describing the gain of electrons? Apparently contradictory language can lead to confusion and alternative conceptions. However, if we explain the historical background to an idea or concept we demonstrate how it and the language has changed over time. This may help students to reflect on the development of their own ideas and accept this change as part of an ongoing and iterative learning process.

Reflecting on language used in the classroom, and taking a more constructivist and interpretivist view of science and language, will allow a more realistic representation of the nature of science and how chemical ideas develop. Presenting chemistry as a human social activity in which thoughts and ideas are initially tentative and couched in human language, like ‘I think it might be … ’, is central to students’ sense of involvement in the their own learning.

Ideas for the classroom

Ollie HunterOllie is head of chemistry and EPQ coordinator at Benenden School and a part-time EdD student at the Faculty of Education University of Cambridge.