Pause to answer this question: why does sodium explode in water but lithium doesn’t?

If your answer hinges on comparing ionisation energies, the amount of energy or the volume of hydrogen released in both reactions you would be wrong (particularly for the latter two). 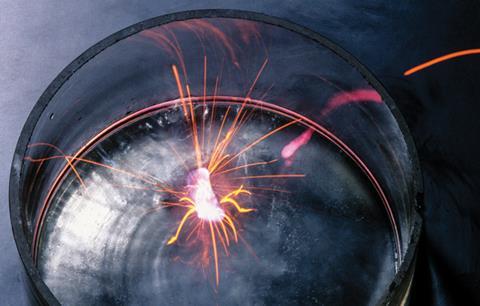 Sometimes we get so focused on the concepts we want to teach that we don’t stop to wonder if we really understand what we’re demonstrating. These are the perfect conditions for the seeds of ‘general ignorance’ to germinate.

The word ‘reactivity’ is fairly ambiguous and can be used by teachers to describe a range of observations. Used in the context of redox reactions, it fits well to the early experiments students perform but not so well with the electrochemical series these experiments eventually lead to. By framing the demonstration in this context, we infer the lie that the reaction becomes more thermodynamically favourable down the group.

It turns out that the visual appeal and suitability of the lithium, sodium and potassium reactions with water to teaching about patterns in the reactivity of metals is almost accidental: gram-for-gram, the most dramatic reactions occur in the middle of the group where the work function and atomic mass conspire to release the most hydrogen in the shortest time frame – but a fortuitous cocktail of kinetic effects and melting points also play their part.

Based purely on an enthalpy argument, all the alkali metals should evolve approximately the same amount of heat per mole when reacting with water. This means that per gram, lithium releases the most heat – by a long way.2

Students can model this pattern using the values from Table 1 to create comparative Hess cycles.

Table 1: Thermodynamic data to calculate the relative enthalpy change for the reaction of the alkali metals with water. Electron affinity, vaporisation and bond enthalpy values are not required as they are identical each reaction.

Table 2: Calculations showing predicted numbers of exposed atoms available to react for each of the alkali metals when a 1 cm cube is immersed in water. Adapted from reference 6

Despite what we might imply to our students, the rate of energy evolution must be far more important than the actual amount of energy released.

From a kinetic perspective, Meyer Markowitz3 has modeled the packing in an alkali metal and, correcting for buoyancy effects, estimated the numbers of exposed atoms in a 1 cm cube dropped into water.

This model suggests a slower reaction for lithium than sodium but it still releases a lot more heat, so why doesn’t it even manage to light its hydrogen, let alone explode?

It’s likely that lithium’s tame reaction is largely an accident of its melting point being above the boiling point of water. Whereas sodium melts at 98°C, and the later alkali metals at even lower temperatures, the melting point of lithium (181°C) is far above the boiling point of water, so the metal can act as an efficient heat sink for the reaction. A thermocouple embedded in lumps of reacting lithium registers bulk temperatures in the range of 98–103°C,3 well below 560°C, the auto-ignition temperature of hydrogen.4

The reactivity of lithium is also inhibited by the relative insolubility of lithium hydroxide compared to the other alkali metal hydroxides.5 Not all of the surface area is available as product hydroxides need to be able to diffuse away. The reaction will be inhibited even more by the evolution of hydrogen gas and, in some cases, the Leidenfrost effect.6

From a free energy perspective, the lithium reaction is the most thermodynamically favoured.1 Heat release from the reaction: 2M(s) + 2H2O(l) → 2MOH(aq) + H2(g), adapted from reference 6

So there are plenty of reasons why lithium doesn’t explode on contact with water, but what are the reasons for the alkali metals exploding at all?

It seems we need a rapid increase in surface area to achieve any kind of explosion. There are at least two possibilities for how this could occur:

The traditional explanation for such a reaction is that of a vapour explosion. In this case, the molten alkali metal is insulated by the Leidenfrost effect as water vapour reacts in a metastable fashion at the surface of the droplet, diffusing through a layer of hydrogen gas and metal hydroxide. After a few seconds, the sphere may be heated to temperatures way above the superheat limit temperature of water.

For a vapour explosion to occur, the very hot liquid metal and the water need to come into contact. Water in immediate contact would be instantaneously vaporised leading to a vapour shock wave (essentially the same as from any regular explosion), which would propagate back through the material, fragmenting the rest of the metal and increasing its surface area dramatically and accelerating the reaction even more.

Such contact could be stimulated in a number of ways:

If a piece of sodium doesn’t reach the superheat limit or if it avoids instabilities that lead to initial fragmentation then it would just fizzle out with little drama.

Philip Mason and colleagues published a paper in Nature Chemistry earlier this year in which they used high-speed video cameras to capture images of dendritic spikes bursting out from NaK dropped into water under an argon atmosphere.9 But the near instantaneous explosion suggested the metal was too cool for a vapour explosion to occur.

Philip used a school-level metallic bonding model to explain: a metal ion lattice surrounded by delocalised electrons. If electrons are transferred to the water, the resulting build-up of positive charge could lead to a collapse in the integrity of the structure.

The increase in positive charge on the surface causes the droplet to fragment through the formation of spikes that burst out into the liquid at huge speeds. The resulting increase in surface area leads to a rapid increase in the production of gaseous hydrogen.

Photos show the low-surface-tension liquid spattering on water. Electron transfer is unimpeded by surface impurities because the droplet is clean and assisted by the submersion of the droplet (having been dropped from a height). Within thousandths of a second, the spikes begin to form. 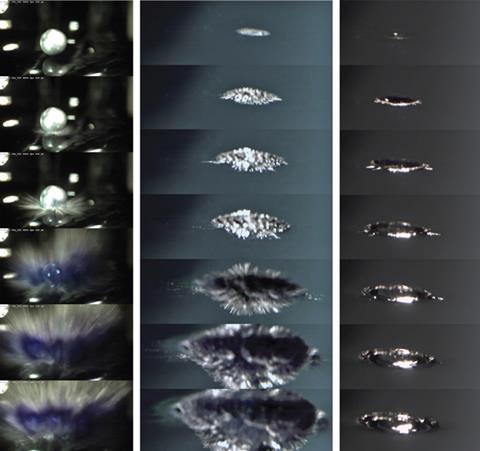 Figure 1: Images of a NaK drop hitting the surface of water from above (left) and below (middle) show the formation of spikes that burst out into the surrounding water (comparison with water, right)9

The solvated electron has been observed in the reactions of sodium amalgams in the past10 but not in the pure metals. Other experiments on competing reactions involving proton and electron scavengers have shown that H2 is generated from solvated electrons rather than hydrogen atoms generated directly on the metal surface, at least for liquid alloys of sodium.11 In water, these solvated electrons are incredibly unstable and elusive12 but Philip’s footage is fast enough to catch them in action. In Figure 1, the blue colour of solvated electrons is clearly present in the left-hand images. More recent footage by the authors shows the same phenomenon with caesium drops. Whether the same effect occurs with solid sodium or potassium alone is unclear.

As you would expect, the work function for NaK is between those of pure Na and pure K,13 so to explain why NaK explodes in a more predictable manner than Na or K alone we have at look to the state of the metal and the surface tension of the liquid (lower for NaK than Na).14 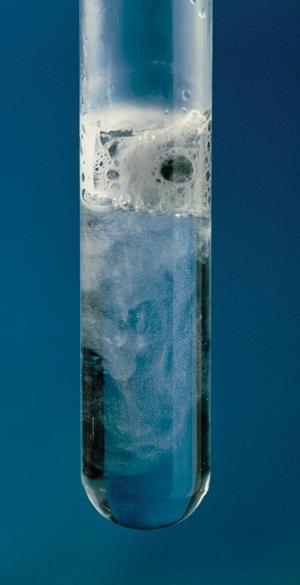 The H/D isotope effect in NaK is consistent with that of the solvated electron mechanism15 and significantly higher than it is for sodium or potassium alone.16 This is more consistent with the latter reaction proceeding on the metal surface,10 indicating that it may be that for this type of explosion to occur the metal needs to be a clean-surfaced liquid with a low surface tension.

Allan Ashworth performed similar experiments in 1979.10 Under identical conditions with water dropped onto excess metal or metal alloy in glass tubes, the characteristic blue colour was only seen for the liquid metal. He suggested the rate of electron dissolution is more highly temperature dependent than the reaction of the solvated electrons in solution. It’s possible that with an initial higher surface area from droplet spattering, and without the lag in temperature associated with melting, the reaction can follow the solvated electron pathway directly. Otherwise, the metal heats too slowly, a product film develops and the reaction proceeds through the slower adsorption pathway, which may lead to a vapour explosion.

Evidence from other videos filmed by Philip suggests the nature of the contact between any liquid metal and water is also important. The reaction of NaK alloy follows a more familiar mechanism when dropped gently onto water. Before it pops, the droplet goes transparent, suggesting that water vapour diffuses to the drop, reacting at the surface and forming metal hydroxide.

I propose the following: if the metal has a low enough surface tension; is dropped from a height sufficient to initiate fragmentation of the drop on contact with water; and the metal has a clean surface, it’s likely that direct electron transfer to the water will occur, resulting in a coulombic expolosion.

If these criteria are not met and the metal is able to stabilise as a droplet on the surface, the Leidenfrost effect will take over. At some point, the droplet may destabilise, leading to direct mixing with water and a vapour explosion. 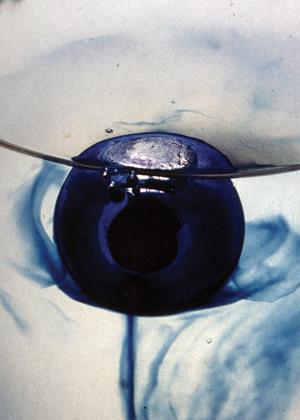 © Department of Chemistry, University of Oxford

I suspect that both of these mechanisms can be seen in a particular Periodic Table of Videos film.17 In the most dramatic reaction a large chunk of potassium submerges enough to push a coulombic explosion but in others stabilises on the surface before fragmenting less dramatically. In the case of lithium, none of the above criteria are met and the reaction fizzes gently.

Now we need to look for footage of clean spheres of sodium and potassium being placed carefully onto the surface of water under an argon atmosphere. If this shows the same spiked structures and blue flash of solvated electrons, Philip’s mechanism might be general. But there are a lot of optical challenges to obtaining such a shot.

Declan Fleming is a chemistry teacher and author of our Exhibition Chemistry column.

10. A B Ashworth,Reactions between the liquid alkali-metals and liquid water. PhD thesis: University of Nottingham, 1979