Looking down a microscope at the nanoscale is helping us to better understand the world around us, explains Josh Howgego 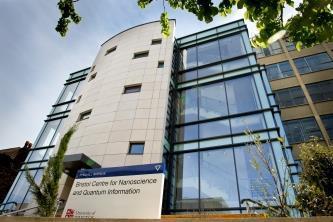 Is this the quietest building in the world?

Like many scientists, Annela Seddon requires special conditions to carry out her research. Some need extreme hot or cold, others need super-powerful magnets or gargantuan telescopes. But for Annela the most important ingredient for a successful experiment is a bit of hush. Down in the world of atoms and bonds that she explores the vibrations from so much as a whisper can wreak havoc like a hurricane. That’s why her workplace, the Bristol Centre for Nanoscience and Quantum Information, is probably the quietest building in the world.

The centre achieves this accolade using a raft of ambitious design features. All the corridors have walkways that are suspended from the ceiling, so as to minimise the vibrations from footsteps travelling through the walls. Even the electricity and water pipes are mounted on springs. Equipped with this silent environment and a modest battery of electron microscopes, Annela is probing ever deeper into the ‘nanoworld’: the realm of structures that are smaller than 100 nanometres, thousands of times thinner than a human hair.

All this clever design is starting to allow scientists to glimpse the rather strange occurrences at the scale of atoms. Yet the bizarre thing, says Annela, is that much of what we’re finding out was already known.

‘Some of the things that we think about as being part of the revolution in nanotechnology have actually been around for years,’ says Annela. One example is the metal nanoparticles that have found a profusion of uses recently. Silver nanoparticles, for example, have antibacterial properties and are now found in cutting-edge products ranging from cleaning sprays to hospital bandages. Yet we know that nanoparticles have been in use – if perhaps not fully understood – for centuries. The British Museum is home to the Lycurgus Cup, a 4th century Roman artefact containing 50 nm-wide gold and silver nanoparticles. The nanoparticles scatter certain wavelengths of light, so that when the cup is held up to the light it changes from an opaque green to a slightly translucent red-orange colour. ‘Clearly the Romans didn’t know what it was they were using here. They just thought, hey, this stuff makes a beautiful-looking cup,’ says Annela. ‘The great thing about nanoscience today is that we’re beginning to understand why and how tiny objects can have the effects they do at the scale we experience them.’

Recently, Annela has been making nanoscale discoveries about very small things inside our bodies. Since the mid-20th century scientists have known that if they take phospholipids, mix them into water and get the conditions right – by adding the right amounts of salts or carefully adjusting the temperature – then the lipids will form bilayers that are convoluted into strange shapes. The structures were investigated by shining X-rays into the solution and measuring how these were scattered as they emerged on the other side. To begin with the structures seemed rather alien, says Annela. ‘People were used to thinking of lipid bilayers as being essentially flat – but that’s definitely not always the case.’

So what causes these outlandish structures to form? Annela explains that the chemical changes of solutes or temperature influence the curvature of the lipid molecules and that this in turn alters how they pack together. ‘Imagine you have been to a cash-and-carry and bought loads of tubes of Pringles,’ she says. ‘If you laid them all out next to each other with no gaps and looked at them from a bird’s eye view, you would just see a very long rectangle with straight edges.’ Sometimes phospholipid molecules are straight, like a Pringles tube but they’re not always so well behaved. ‘What about if you tried that exercise with Cornetto ice cream cones?’ asks Annela. ‘As long as you have to place the ice creams with their cones pointing in the same direction, you’re then going to start getting curves and circles – and it’s that, on a three dimensional level, which is creating these beautiful swirling nanostructures.’

In the past when scientists fabricated these twisted domains simply by adding some phospholipids to water and adjusting the salt concentration, the structures would form randomly. ‘It’s like the structure is composed of lots of little tiles connected together – so the pores don’t run continuously through the whole structure, they get cut off,’ says Annela. But her breakthrough has been to find a way to make a twisted-up membrane that has a single uniform domain. ‘I like to think of them as soft matter crystals,’ she says. ‘They are in solution, but they are like crystals in that their repeating pattern of tunnels and pores go on forever.’

To make these ‘soft matter crystals’ Annela, and her colleague Adam Squires from the University of Reading, UK, make use of their expertise with flow reactors. To begin with, a random structure is created by mixing up the phospholipids in water. Adding a dash of butanediol, a simple alcohol compound, causes the membrane to become ‘spongy’, she says. Then, placing the solution in a flow reactor, a constant flow of water is passed over the membrane. Remarkably this simple technique persuades the nanoscale channels to line up, producing the ‘crystals’.

Chemical analysis of artefacts like the Lycurgus Cup can often reveal surprising things about the past. Earlier this year scientists were testing 2500 year old ceramic wine vessels found in southern France. The French are famously proud of their wine, but the wine jars yielded chemical residues that indicate wine-making in France was probably copied from ancient Italians – mon dieu!

Chemical analysis of artefacts like the Lycurgus Cup can often reveal surprising things about the past. Earlier this year scientists were testing 2500 year old ceramic wine vessels found in southern France. The French are famously proud of their wine, but the wine jars yielded chemical residues that indicate wine-making in France was probably copied from ancient Italians – mon dieu! http://bit.ly/1fgCb16

With such a simple method for making uniform porous membranes now at hand, there could be several interesting applications for them around the corner. Their channelled structures are reminiscent of zeolites, the natural minerals containing aluminium and silicon which are widely used as catalysts. These compounds make such good catalysts because the tunnels running through them can host specific types of molecule that, once inside the pores, become confined next to each other. This reduces the activation energy for certain reactions and so speeds them up. Today zeolites are used in many industrial reactions, including the catalytic cracking of crude oil.

The soft matter crystals could be useful for similar reasons but in very different situations. Because they are made of phospholipids – a material that the body is used to dealing with – they are inherently suited to biomedical environments. Some researchers have been taking the extended ‘soft matter crystals’ and shaking them into tiny pieces using ultrasound. The minute fragments produced are sometimes called ‘cubosomes’ and there is ‘a huge amount of interest in these as drug delivery vectors’, explains Annela.

There are several reasons why you might want to encase a drug molecule in a protective wrapping. For example, the blood vessels surrounding tumours are well known to have larger than usual pores; that means wrapping the drug in a bulky coating can force it to target cancerous tissues exclusively. It’s simply too big to pass through blood vessel membranes surrounding healthy tissues. Delivery vectors are also useful when the drug molecule is particularly sensitive to metabolism – the packaging can act as a shield against enzymes that would otherwise break the molecule apart. But the big advantage of cubosomes over other types of vector, says Annela, is that they’re amphiphilic. This means that drugs that are too hydrophobic to dissolve in the bloodstream will sit happily inside a lipid capsule until they reach the place they’re needed.

There are other possibilities too. Annela’s collaborator Adam, who is an expert on biomolecular assemblies, is keen to try using the lipid structures as templates for new catalysts. The structures could be coated with metals, then washed away to leave zeolite-like structures made from metals that wouldn’t normally form such structures.

Take a virtual tour of the super-quiet Bristol Centre for Nanoscience and Quantum Information.

Take a virtual tour of the super-quiet Bristol Centre for Nanoscience and Quantum Information (http://www.summit7.co.uk/virtualtours/bristol_uni/bristol_uni1.html).

Getting under your skin

One final question remains though: are Annela’s twisted membranes like that intriguing Roman cup? That is, have these foreign-looking twisted membranes been lurking inside our bodies all along? Given how easy it is to form the structures, Annela thinks it’s almost certainly so. ‘It’s pretty hard to prove this of course, because firing x-rays through a cell while it’s still alive and getting a detailed enough reading of just one tiny component has so far been impossible,’ she explains. Scientists would need to use x-rays to conclusively prove the underlying symmetry of the pores inside membranes. But – tantalisingly – scientists have used electron microscopy to zoom down to the level of membranes. There they can see some very convoluted-looking structures, especially organelles such as the endoplasmic reticulum, the cellular factory that packages up proteins. These could well have the types of inner structure that Annela has observed in her lab. ‘It makes sense for these regions to be folded up,’ says Annela. ‘That way they have as large a surface area as possible – and that makes the chemistry going on there more efficient.’

Perhaps it’s appropriate that these secrets of the nanoworld are being unlocked in the hushed halls of the quietest building in the world. After all, there are momentous discoveries being made there. ‘One of the reasons I’m interested in these structures is simply because they’re so beautiful,’ says Annela. ‘But not only are they attractive, they are just plain odd. What we have here is a crystal-like order in a substance that has the consistency of jelly – that goes against all the textbooks, and to me it’s fascinating.’