Can an American university programme improve BAME students’ attainment here in the UK?

In the Higher Education Policy Institute (HEPI)’s 2019 collection of essays on reducing racial inequalities in higher education, Baroness Amos, director at the School of Oriental and African Studies (SOAS) University of London, concludes the higher education sector has a long way to go before all students are on a level playing field but acknowledges how hard it is to change the culture of an institution.

According to the Office for Students, BAME (black, Asian and minority ethnic) people now account for roughly 27% of the student HE population (14% of the UK population). However, Universities UK (UUK) notes in its recent report that ‘substantial inequalities persist throughout the student life cycle’. It describes how white students continue to outperform BAME students even allowing for prior attainment. This ‘attainment gap’ exists across all UK HE institutions; more than two-thirds had an attainment gap above 10%.

According to government figures, the proportion of white students who received a first or 2:1 in 2017-18 was 81% compared to 68% for BAME students. The biggest gap is between black and white graduates: only 14% of black graduates achieved a first-class degree compared with 31% of white graduates. However, the gap between the proportion of white and black graduates achieving a first-class or 2:1 degree fell by three percentage points between 2012–13 and 2017–18.

Why is this happening? UUK suggests it’s because BAME students lack ‘a good sense of belonging’, which might contribute to low levels of engagement, including with curriculums, and of progression to postgraduate study. 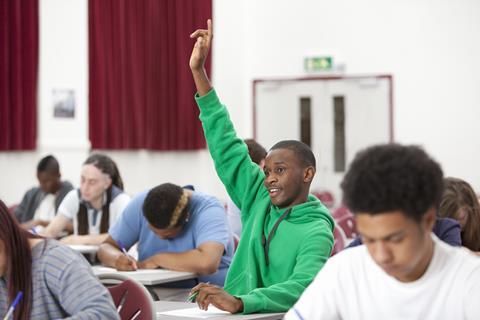 ‘The BAME attainment gap is a very significant issue …’ says Eunice Simmons, deputy vice chancellor of Nottingham Trent University, ‘but it is proving extremely hard to close. The government is increasing pressure to address this through the Office for Students’ Key performance measure, aiming to close the gap entirely within 20 years.’

Hugo Dale-Rivas of HEPI suggests that all universities should join the Race Equality Charter and apply for awards. ‘Currently about one third of universities are members and relatively few have awards,’ he says. ‘The government could encourage this process is by [providing] financial incentives.’

In the STEM community, finding up-to-date data is tricky. The charity Business in the Community looked at the 2012-13 student cohort studying STEM subjects and found that 21% were from a BAME background, up from 19% in 2009-10. It also found the majority of BAME students attended universities with large BAME communities.

More recently, the Royal Society looked at diversity in the scientific workforce. It found that BAME graduates in 2014 were less likely to progress to scientific jobs than white students.

We go after high-achieving students, bring them together, offer support and development, and make them visible on campus

‘The relatively high proportion of BAME students in HE should mean there is a secure pipeline of talent coming into STEM subjects,’ comments Eunice Simmons. ‘This is not universally the case across the disciplines and there is scope for more proactive support to draw students in to rewarding STEM career pathways.’

Perhaps it’s time for UK universities to follow the example of the University of Maryland Baltimore County (UMBC). The university has developed a programme to support underrepresented minority students in STEM subjects. It has also successfully rolled out the programme to other universities.

Set up in 1989, the Meyerhoff Scholars Program (MSP) has graduated 739 students in science and engineering. These students are more likely than the average student to continue studying, with 76% going on to graduate or professional programs in STEM. UMBC claims that students who turned down places on the programme were half as likely to graduate with a STEM undergraduate degree and about five times less likely to pursue a graduate degree in STEM.

‘Whereas most diversity programs focus on improving deficits in students, MSP has a different philosophy,’ says Mike Summers, MSP leader at UMBC. ‘We go after high-achieving students, bring them together, offer support and development, and make them visible on campus. Just like a sports team. We empower the students.’

The students attend a summer ‘bridge’ session before the first term. ‘Impostor syndrome disproportionately affects BAME (and women) students,’ says Mike. ‘This means that if they struggle in the first term adjusting from high school to college, they are more likely to drop out. Before term starts, we teach them tools to deal with the stresses, how to reach out for help and to offer help to others. They are taught how to work together and support each other. When term starts, they come to class early as a group and sit in the front rows. They ask questions and do well in tests. Other black students see these black students excelling and think it’s possible for them as well.’

The problem is not with the students, it’s with the institutions and structures which favour a traditional, white middle-class kind of student

It’s not just students’ attitudes that change though. ‘The expectations of faculty change, too, as they see black students achieving,’ explains Mike.

In his view, this approach is far more successful for teaching staff than standard diversity training. ‘Research shows you can teach faculty how to look out for biases, but this doesn’t change student performance or retainment.’

He has no doubt that other countries could do the same thing.

Pre-entry programmes are already widely used in the UK for target groups, says Mike, but not always for STEM applicants so there is the potential to grow these. ‘The support needs to be throughout the course, and targeted advice on employment and further study options can be very effective,’ he says. ‘Students also want more role models, and where these are not readily found in the current workforce, then peer or alumni mentoring schemes can be very effective. The point about training of staff is well made as perceptions and pedagogies need to be challenged.’

Hugo Dale-Rivas agrees. ‘The problem is not with the students, it’s with the institutions and structures which favour a traditional, white middle-class kind of student and that is where we need to make change.’