The success of a chemical project may be the result of many years of hard work and considerable expense. After spending so much time and money on a project, the chemists involved will be proud and protective of their work, especially if the project has indentified a chemical product with highly desirable properties. An important consideration is whether they can commercialise their work without anyone else taking advantage of it. So, how is this done? 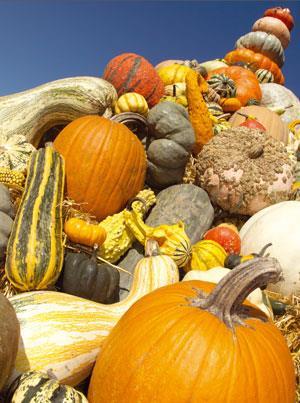 This is just the question asked by Oren Scherman and his researchers at the University of Cambridge. Oren and his group have been studying a group of compounds known as cucurbiturils. Oren and Urs Rauwald, his PhD student, recognised the attractiveness of the cucurbituril chemistry because the products they can form have incredibly interesting physical and chemical properties.

With all these exciting properties in mind, Oren and Urs, together with Cambridge Enterprise, a university department which commercialises university discoveries, sought to protect their research. They chose patent protection, which is perhaps the most common way of protecting chemical inventions. I was asked to prepare a patent application for the cucurbituril technology. This can be a complicated process.

Patent protection allows you to prevent your competitors from making, selling or importing your technology. A patent is therefore a powerful tool to protect a chemical product. However, this is not awarded indefinitely, and is limited to just 20 years. After this time you can no longer prevent others from using your invention.

A patent is also a commodity, which can be sold or licensed for a price to those interested in the patented technology. For university companies such as Cambridge Enterprise, it is this business of selling and licensing technologies that will usually bring revenue to the University and the inventors.

In practice, suing your competitor is a last resort. Even if you win, it is unlikely that you will receive full recompense for all the expense of the legal proceedings. There is also no guarantee that you will win. Typically, your competitor will argue that your patent is not valid, and will attempt to show that your technology is not new, inventive, or sufficiently described. In practice, many companies prefer to avoid court proceedings wherever possible and will attempt to come to an amicable agreement.

The cucurbituril links two polymers, A and B, together by allowing guest portions of each polymer (the rectangles) to reside in its internal cavity

A few years ago, Oren and his PhD student, Urs Rauwald, successfully created a series of polymer structures that used the cucurbituril as a handcuff to non-covalently link polymer molecules. The polymers were provided with a group that was known to be a cucurbituril guest. The cucurbituril was shown to link two polymers in a complex by accommodating two guests, one from each polymer, within its cavity (fig 1b). Oren and Urs realised that the  cucurbituril complexes possessed intriguing and useful characteristics, and the inventors were particularly interested in exploiting the way in which the complexes respond to other guest molecules, light and electrochemical potential. For example, they were interested in the way the cucurbituril-linked polymers may be used to solubilise drug compounds. The polymers could then be used as a vehicle to deliver the drug to a location within the body. Once there, the drug may be released, ideally in response to another guest molecule or light.

Patent protection must be applied for at a patent office. As this can be a long and complicated process, it requires the help of a patent attorney who can prepare the application and guide the invention through the application process.

Working with Oren and Urs, I prepared a patent application which included a detailed description of their work on the cucurbituril handcuff. Preparation of a patent application is not trivial as it must contain all the technical details to support the technology. It also contains a series of formal statements defining the invention. These are written in a peculiar patent legalese, and the text makes for strange reading to those unfamiliar with patents. The definition for the cucurbituril-linked polymer invention is shown below. It describes the complex shown in fig 1b, where a cucurbituril holds together two polymers.

Once the application is filed, you cannot change what you have said, and you will be limited to the formal statements and descriptions that are included in the original application. In view of this, Oren, Urs and I spent considerable time making sure that the application was clearly written.

The patent office will only grant patents if the application meets strict criteria. During the application process, a patent examiner, who is experienced in the technology in question, will consider these requirements in great detail.

To get a patent for your invention it needs to be:

For a technology to be novel, simply means that you must have developed something that is new. This is entirely understandable: you won't be given a patent for something that someone has already invented! The patent examiner will look through a wide variety of databases to establish whether or not the technology in the application is new. Any publication, presentation or talk, from anywhere in the world that was made before the patent application was filed, will be taken into account. It doesn't matter if a disclosure is old, or obscure, or in a foreign language, they all count as relevant if they appeared before you have managed to file your application.

This does not mean that your technology has to be a monumental breakthrough. It must not, however, be an obvious modification of what others in the field have been doing. It is helpful later in the application process if an inventor can show that his technology provides unexpected benefits, for example a high activity, or new and unpredicted properties.

Patent applications are freely available from the patent office. You can obtain a copy of the application I prepared for Oren and Urs.

Type the publication number, WO 2009071899, into a search engine and you will be provided with links to the application.

The most useful links are to the websites hosted by WIPO (World Intellectual Property Organisation), the United Nations agency that is responsible for the international patent system.

In the first stage of Oren's and Urs's patent application, the patent examiner produced a search report which included the details of all the documents the examiner had found whilst studying cucurbituril technology. Here, the examiner was looking for anything that might question the novelty and the inventiveness of their work, as well as any documents that were useful background reading.

The examiner identified work by other researchers in the cucurbituril field, including earlier work from a South Korean university (published in English) and a Japanese research institute (published in Japanese, but with some useful chemical reaction schemes to assist reading). At this search stage, the examiner's analysis of the case is a preliminary one, and simply highlights the areas that will be important when the application and documents are studied later, in greater detail.

Shortly after the search report was sent to me, the patent office published the inventors' application. This is an important part of the patent application process. Often the publication reveals an inventors' work to the public for the first time. It is at this stage that researchers in the field can see what their competitors are working on. In particular chemical industries, chemists may deliberately delay or not publish their work in the chemical journals to avoid drawing attention to their research. Patent publications may be the only way to know what areas of technology a competitor is working on.

After considering all the documents, the examiner concluded that the cucurbituril technology developed by Oren and Urs was new and was inventive. The examiner did not raise any objections to our description of how the cucurbituril products could be prepared or used. This is perhaps not surprising, as the patent application contained all of the detailed experimental procedures developed by Oren and Urs.

For Urs and Oren, this second examination stage in the application process has been relatively straightforward. They appear to have developed a virgin area of chemical technology, and the patent office is willing to allow them protection for this technology.

This stage of the application process is usually the most crucial in the whole procedure. If an examiner is not convinced that your technology is new or inventive, or thinks you have not provided sufficient detail about the technology, you will need to argue your case. You may also need to consider limiting the scope of what you are attempting to obtain protection for. If things do not go well at this stage, you may have your application refused. Many applicants may abandon their case during this examination stage if they feel that they cannot get the broad protection they were hoping for. Dealing with the objections from the examiner can take many years and can involve detailed arguments on the interpretation of legal and scientific points. 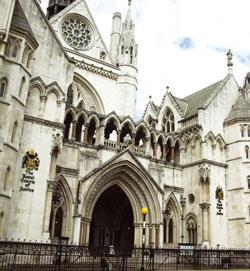 The Royal Courts of Justice, London

For many applicants, particularly those who are involved in detailed arguments with the examiner on the question of novelty and inventiveness, the application procedure can take ten years or more. It is not uncommon for applicants to deliberately delay their patent application. In this way, the applicant's competitors are left guessing as to what sort of patent will be issued.

The patent application procedure described above is a very simple overview of what can happen. There are many complexities and formalities in the process and these can trouble even the most experienced patent attorney. The patent application procedure is further complicated by the fact that an inventor must file an application in every country that he would like patent protection in. Patent law and procedures vary from country to country, complicating matters and adding to the overall cost even more.

Jonathan Wills has a PhD in chemistry from the University of Cambridge. He is a European and chartered patent attorney working with the firm of Mewburn Ellis LLP in Cambridge.