They sit at the bottom of the periodic table like they don’t belong, but these elements are vital ingredients in many gadgets and ‘green’ technologies. Tom Westgate finds out what makes them so versatile and valuable. 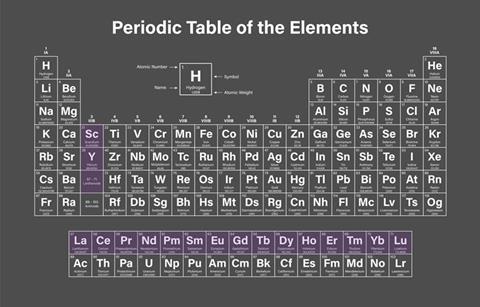 The rare earth elements (REEs) play a central role in many of the technologies and gadgets that we take for granted. Your hard drive uses a magnet containing neodymium to access data and your LCD TV or monitor probably relies on terbium and europium to generate its vivid colours. In the near future, all these may be powered by electricity generated by a neodymium-based magnet spinning in a wind turbine.

Bottom of the table, top of the league

REEs are a group of metals that includes the lanthanides (lanthanum to lutetium), plus scandium and yttrium. The lanthanides are in the f-block, on the bottom of the periodic table, because they all have valence electrons in 4f-obitals. ‘The important thing to know about f-electrons is that they don’t take part in bonding’ says Helen Aspinall, a lanthanide chemist at Liverpool University. These non-bonding electrons, buried deep within the atom and shielded by 4d and 5p electrons, are what give the lanthanides such interesting properties, from light emission to magnetism.

The REE’s optical properties are used to prevent forgery. Appropriately, europium is used to tell genuine Euro banknotes apart from counterfeits. Complexes of europium are added to the notes and emit red or green light under a UV lamp. The f-electrons of Eu3+ are free to absorb energy from UV light by moving temporarily to a higher energy level, before emitting energy as light as they return to their original state.

This light-emitting ability of ‘excited’ f-electrons is the reason REEs are also found in lasers, energy-saving light bulbs, and display screens.

What’s so rare about them?

Rare-earth elements are not really very rare. They are as common in the Earth’s crust as tin, lead and zinc. They were named ‘rare earths’ when they were discovered in the 19th century because they were found in scarce minerals. 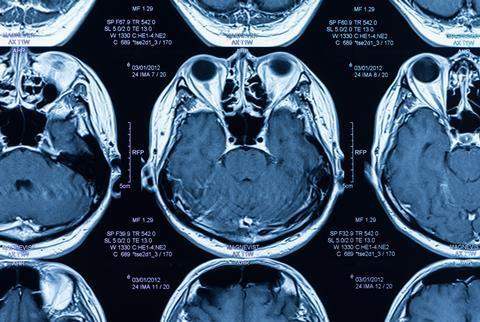 The main reason that lanthanides are so valuable, however, is their magnetism. All lanthanides have at least one unpaired electron and because an unpaired electron has its own magnetic field, it acts like a little bar magnet. Gadolinium, with its seven unpaired electrons, or half filled f-shell, has some ‘pretty impressive magnetic properties,’ says Aspinall, because seven is the most unpaired electrons you can have on a metal. Gd3+ complexes are sometimes given to patients before a MRI scan, to boost the magnetic resonance signal and make a clearer image.

On their own, REEs are magnetic only below room temperature. But, when you combine them in an alloy with transition metals like iron or cobalt you get the best of both worlds: a permanent magnet that remains strongly magnetic at higher temperatures.

Lanthanide-based magnets, like the NdFeB magnets in hard drives and wind turbines, are prized because they cannot be demagnetised. This is because of the shape of the lanthanide atoms, which relates to the irregular shapes of the metal’s f-orbitals. ‘Neodymium atoms are shaped like smarties, and samarium atoms like jelly beans’, says Allan Walton, a research fellow in metallurgy and materials at the University of Birmingham. Packed in with other atoms in a crystal, these oddly-shaped atoms all line up in the same direction, and are unable to rotate and so their magnetic field is permanently locked in place.

The chemistry of making a magnetic RE alloy is ‘surprisingly simple’, according to Dave Murphy of Less Common Metals Ltd in Birkenhead: ‘The principle is equivalent to putting sugar into tea.’

At Less Common Metals, the ‘tea’ is molten iron and boron, at about 1300°C. Murphy adds solid neodymium, which dissolves into the molten mixture and the mixture is then poured into a cast and cooled until it solidifies. Ideally all the Fe, B and Nd atoms should be randomly distributed in the final magnetic crystal, so the mixture is cooled as quickly as possible to freeze the atoms in place as they randomly move through the liquid. If the cooling is too slow, iron atoms clump together as the mixture solidifies, making a weaker magnet.

As high-tech applications of REEs become more common, the metals become more and more valuable. 97 per cent of the world’s REEs are mined in China and in 2010 the Chinese government decided to cut the amount of REEs it exports (see InfoChem 126). Because of this, the price of REEs is rising sharply and the rest of the world is desperately seeking new sources.

Could chemistry help to make the most of the world’s precious REE supplies? Animesh Jha and his team of materials scientists at Leeds University believe so. Working to develop more efficient and environmentally friendly methods for processing titanium dioxide-containing minerals, by chance they found that they could use simple chemistry to turn an almost worthless source of titanium into a potentially valuable source of REE ores.

Titanium-rich minerals are usually mixtures of TiO2 and FeO3, but lanthanide oxides are often trapped inside the minerals. These ‘impurities’ make the minerals a less-valuable source of TiO2, but Jha recognised their presence as ‘nature’s gift to humans.’

Jha’s team heated a mixture of the TiO2-containing mineral and an alkali such as sodium bicarbonate to around 800°C. This oxidised the TiO2 and FeO3, forming sodium titanate and sodium ferrate (Na2TiO3 and Na2FeO4) but the lanthanide oxides did not react. When the mixture was added to water, the Na2TiO3 and lanthanide oxides remained insoluble but the Na2FeO4 was hydrolysed and dissolved, breaking up the mineral lattice and freeing the small particles of REE oxides trapped inside. By chance, REE particles float in water while Na2TiO3 sinks so they can be easily skimmed off the surface of the water.

Jha suspected the REEs could be extracted from the minerals, but ‘we were not expecting it to come out so simply’, he says. As well as exploiting a neglected source of REEs, he believes the process offers a greener way to process the REE ores that are mined in China and elsewhere.

Helen Aspinall shows us there are ‘quite a few useful properties of the rare earth elements that can be exploited in some exotic chemistry.’

Similar to transition metals, lanthanides form coordination complexes, but the changes in chemical properties across the lanthanide series are much more subtle, compared with their d-block neighbours. All lanthanides are most stable in the +3 oxidation state. Some (like europium and samarium) can exist in +2, but these compounds tend to be reducing agents, giving up electrons as they return to the more stable +3 state.

Rare-earth elements have quite large ionic radii, which means they can form stable structures with coordination numbers up to 12. This is useful for catalysis where reagents from the catalysed reaction need to be accommodated in the catalyst complex. Aspinall singles out Cerium as a good example. As well as stabilising high coordination number complexes, Ce can exist in both the +4 and +3 oxidation states, opening up some very useful redox chemistry: Ce(IV) complexes can oxidise a range of organic substrates, then cycle back from +3 to +4 and do it again.

REE complexes can also act as Lewis acid catalysts in reactions like the Friedel-Crafts alkylation of aromatic rings The range of ionic radii means you can choose whichever lanthanide is the best size match for the reagents in the catalysed reaction.

Another way to make the most of existing REE supplies is by recycling, but melting down a NdFeB magnet, for example, takes too much energy to be economical. Because of this, says Allan Walton ‘there are so many magnets out there being scrapped and we’re not sure where they’re going,’ But Walton and his colleagues at Birmingham, including Andy Williams, have taken a step towards solving this problem.

Walton pumps high-pressure hydrogen into the crystal structure of the alloy, forcing the metal ions apart and making the magnet swell and crack. Gradually, this breaks the magnetic block down to a powder, which can be simply poured out from a hard drive – much quicker than dismantling it to remove the magnet.

Although the powder is no longer magnetic, the process is reversible. ‘If you heat and press the powder in a vacuum you can get the hydrogen out again,’ Walton explains, and squeezing out the hydrogen atoms reforms the block and restores the magnetism.

The REEs’ affinity for hydrogen is useful in another important green technology. Electric cars rely on hydrogen to power their fuel cells, but need a safe and reliable way to store the highly explosive gas. Alloys like LaNi5H6.6H2O could be the answer for hydrogen storage as the hydrogen is incorporated into the metal bonding – just like in the powder formed by Walton and Williams’ process. To get the hydrogen out, you simply heat up the alloy and best of all, says Dave Murphy, ‘the alloy is completely safe. You can fire a bullet through it.’ Once all the hydrogen is used, the alloy can be ‘refilled’ by pumping hydrogen back in.