If you’ve ever been off sick with a cold, you probably felt too lousy to realise that infections can be much, much worse. Usually people tend to fight off germs like bacteria and viruses quickly enough – but there are plenty of deadly germs. Perhaps the scariest is Ebola, which has affected many West African countries several times in recent years. On average, it kills around half of infected people, following internal and external bleeding. Even the familiar flu virus killed around 100 million people in 1918. But what if you could get protection against these diseases without needing to feel ill?

You’ve hopefully already had this magical-sounding treatment, better known as a vaccine. Vaccines protect us by teaching blood cells how to fight infection explains Katie Ewer, senior immunologist at the Jenner Institute in Oxford, UK. The idea is to copy what happens when our bodies react to infections, for example when we catch colds. ‘When we use a vaccine it’s the same process, but we’re telling cells in your blood how to respond to that infection without you having to get sick,’ Katie says. And chemistry is central to efforts to design and make better vaccines and stop them breaking down before they’re used.

This article highlights the role that chemists play in vaccine production and the importance of chemistry in biology. Vaccines help us fight off diseases caused by bacteria or viruses and chemists have discovered ways of keeping vaccines active even when they’re not refrigerated. Scientists also use chemistry to amplify vaccines’ immune response in more vulnerable people. Use this article to provide real-world contexts when teaching about salts and the particle model and to make cross-curricular links with biology.

All vaccines work against a specific germ. They do this by targeting chemical building blocks that both viruses and bacteria contain. In such germs, genes made of DNA or similar RNA molecules act similarly to how a computer program might control a robot. They encode instructions on how to assemble small amino acid molecules into larger proteins that make up germs’ bodies.

Bacteria, which are much larger than viruses, can travel through our blood and multiply on their own, copying themselves many times. Eventually our immune systems learn to make another type of protein, called an antibody, which can recognise bacterial protein shapes. Antibodies stick to bacteria using intermolecular forces like hydrogen bonding. The antibodies can then signal for white blood cells to come and kill the unwelcome invaders. Most vaccines train our immune systems to make antibodies needed for bad germs before they infect us, Katie explains. 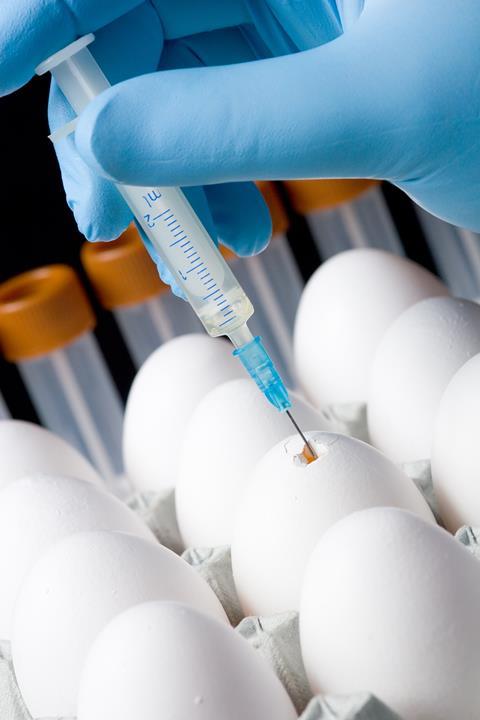 Vaccines are often made from germs that have already been killed or tamed. Exposing our immune system to such inactive germs lets antibodies learn to recognise them. For example most flu vaccines use weakened, but live, flu viruses. During the manufacturing process, the viruses are injected into chicken eggs, where they multiply. Companies can then take the virus back out through a needle for use in vaccines. In most cases the vaccine itself is combined with another component, called an adjuvant, just before it’s given to people. Aluminium phosphate and aluminium hydroxide are among the most common adjuvants used.

Using adjuvants is a tricky process, because ‘we don’t know completely how they work’, Katie admits. ‘They amplify the immune response to whichever protein you’re trying to use in your vaccine,’ she says. ‘Adjuvants are really important for vaccinating young children and the elderly, where we know that responses to vaccines are not as good as in adults. But if you give too much of an adjuvant, you get a very sore arm, and so on. It’s usually the adjuvant that gives you any side effects.’

A boost for poor countries

Another problem is that vaccines can break down, explains Manjari Lal, who researches vaccine formulation at PATH, an international non-profit organisation focused on health innovation. ‘The most common degradation is protein denaturation, which involves unfolding of the three-dimensional structure,’ she says. This could be caused by heat, physical force, or chemical breakdown. Chemical breakdown can be especially important when vaccines are converted from liquid to powder through freeze-drying. In this approach, PATH’s workers freeze solutions containing sugar stabilisers and remove ice by putting the vessel they’re in under vacuum. The vaccine’s pH has to stay stable during this process to avoid chemical damage. Manjari and her colleagues have to add the right combination and type of salts to ensure this.

Similarly, heat breakdown is a problem when vaccines need to go to poor, hot countries where fridges are scarce. Katie’s Jenner Institute colleagues have found a way to make mixtures survive heat using common table sugar, sucrose and a different form of sugar, trehalose. The scientists leave a mixture of these sugars and the vaccine and adjuvant to dry slowly on a filter or membrane, where they solidify into a thin, sugary film. Alcohol functional groups on the sugars hold vaccine proteins’ shape steady using intermolecular interactions, again including hydrogen bonding.

Manjari and her PATH co-workers also use a similar approach, and she emphasises the importance of stopping proteins moving. Because there’s little water, it’s also hard for other substances to get into the film to break the protein down. Degradation reaction rates slow down enormously. In the Jenner Institute method, vaccine makers then put the membrane into a simple plastic cartridge that can sit on the end of a syringe. Then, when the vaccine is needed, medical staff can just flush it with water, releasing the vaccine and injecting it into a patient.

Make cross-curricular links with biology with these synoptic questions to get your students thinking about chemistry in unfamiliar contexts. There are two versions of the resource, one where the questions are grouped into topics and another where they are ungrouped. Questions could be selected and used to stimulate discussion in class. Alternatively they could be used in a worksheet for a revision or extension activity, either at the end of a topic (the grouped questions) or at the end of the course (synoptic questions).

For many widely-used vaccines, researchers found the right trigger to form antibodies from because they ‘got lucky early in the process’, Katie says. With limited scientific knowledge, vaccines for other diseases have been out of reach. These diseases are often caused by viruses, which antibodies sometimes don’t work against. That’s because viruses can recognise and grab proteins on the surface of our cells. Viruses force their way inside these cells and hijack their protein machinery to churn out copies of themselves.

‘Then, the job is much more difficult because you’ve got to clear the virus from inside those infected cells, and antibodies can’t do that,’ Katie notes. One option, which Katie and her teammates have used to develop an Ebola vaccine, is to block viruses from getting into cells. This is possible because over the last decade it’s become much cheaper to read the genes encoding how germs are built. She can work out which genes relate to proteins that Ebola uses to grab onto our cells.

‘We can then generate a vaccine that produces antibodies against those proteins,’ Katie says. ‘That’s very straightforward, because there are only seven proteins encoded within the Ebola genome.’ Making an Ebola vaccine is surprisingly easy – none that have been tested in people have been unsuccessful, she notes. They mainly hadn’t existed because no one had prioritised developing them.

Another problem arises during production, when companies cultivate viruses in eggs. At this point, the viruses can change slightly and become less effective in vaccines. Instead, Katie and her fellow Jenner Institute scientists produce proteins for use in vaccines by genetically modifying bacteria, yeast or insect cells to make them. They can then blast the cells open, and separate out the proteins they need using chemical purification techniques like chromatography.

Such advances are part of a general improvement in vaccine production that also opens opportunities to make them more powerful than ever before. Katie specialises in making ‘sub-unit’ vaccines that can train a type of white blood cell called a T-cell to kill off virus-infected cells. ‘You take a common cold virus and delete about half of its genome,’ she explains. ‘It can’t reproduce inside a human, but can express a gene and show a protein to the immune system.’ This ‘is much more difficult’ than making antibody-training vaccines, she says, but it could help deal with an important problem: flu vaccines sometimes don’t work. 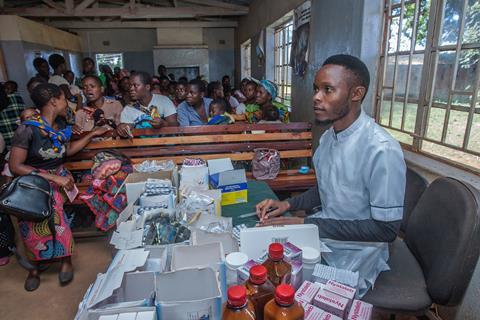 A nurse waits to administer treatment to sick children at the beginning of the Malaria vaccine implementation pilot programme at Mitundu Community hospital in Lilongwe, Malawi, on 23 April 2019

This problem occurs because there are many different strains of flu, which are given names like H1N1 or H5N1. The H refers to a protein called haemagglutinin, which is what antibodies arising from conventional vaccines target. Currently, if a vaccine doesn’t cover the strain that infects us, our immune systems aren’t trained to it fight off. Haemagglutinin has a head and a stem, with antibodies from vaccines normally targeting the head part. However, that part varies between different versions of haemagglutinin. The stem is more uniform and stable, but usually ignored by the immune system. Using the gene for this stem to make a sub-unit vaccine could protect against every form of flu.

The Jenner Institute is using this approach on other illnesses where vaccines are urgently needed, including HIV, tuberculosis and especially malaria. ‘The big Ebola outbreak in West Africa two years ago killed around 11,000 people,’ Katie observes. ‘Malaria kills that number every two weeks!’ Malaria is caused by parasites that are much larger and more genetically complex than bacteria or viruses. It is therefore hard to decide which protein a vaccine should target.

Katie highlights a vaccine for malaria that entered large-scale human trials in April 2019, having been in development for 30 years. Now we understand the science much better, malaria could be one of the first diseases to benefit from improved ways of delivering immune self-defence, she suggests. ‘We can make the vaccine cheaper and easier to manufacture, potentially safer, and maybe more cost-effective – making it into the 21st century version, hopefully.’

Read this careers profile on the Association of British Pharmaceutrical Industry website to learn more about the work of formulation scientists: bit.ly/2Wri37p

Students often need a reminder about the formulae of ionic compounds and this classroom activity is a simple way of improving recall: rsc.li/2I7rYpt

Andy Extance is a freelance science writer based in Exeter, UK.