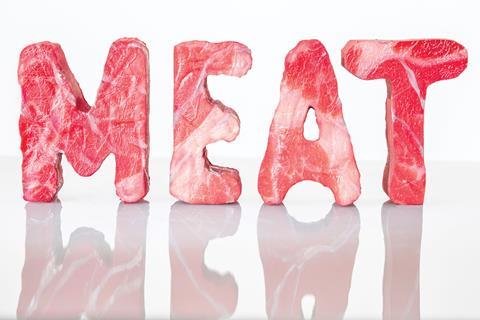 A mouthful of fatty, juicy protein, browned and tasty can be very satisfying. For meat eaters, it’s a regular pleasure. For vegetarians and vegans, the experience may be less common.

There are many reasons to eat less meat. You might not want animals to die to feed you. You might be worried about animal welfare or how eating too much meat can harm your health. Or you might be concerned about meat’s environmental impact. Farming animals, especially cows, for meat can be very wasteful. It can take up to seven kilograms of plant-based feed for a cow to put on one kilogram of mass. That takes up more land for farming and emits more greenhouse gases than if people just ate the plants.

There are nine essential amino acids which the body cannot make for itself. We need to get these amino acids from dietary sources of protein. Food analysts and food technologists use techniques such as thin layer chromatography (TLC) to identify different amino acids in food products. With your 16–18 students, talk about different applications of TLC analysis while measuring chromatograms and calculating Rf values.

Still, many people like eating meat enough that they don’t worry much about it. And when not eaten excessively, meat can also be highly nutritious. What if we could get meat without the problems?

Food scientists are working to make the best meat alternatives possible. Many are based on proteins from plants. Jaspreet Singh and Lovedeep Kaur from Massey University in Palmerston North, New Zealand, call them meat analogues. Some like seitan, made from wheat protein, or Quorn, made from a type of microscopic fungus, have been around for decades.

Jaspreet says that to make plant-based products with a meaty texture, companies cook them in a similar way to crunchy cereal snacks such as Wotsits, called extrusion cooking. It usually involves feeding ingredients, corn in the case of Wotsits or chunks of textured vegetable protein from peas or soybeans in meat analogues, into a tube called an extruder barrel. The extrusion cooker heats the barrel to 200˚C. Inside it, two screws spin round, moving ingredients along.

Jaspreet and his fellow food scientists feed in a lot of liquid too, to stop the meat analogues going crunchy. ‘It comes out in the form of a layered or fibrous structure,’ he says. That layered structure is important to making a truly meat-like mouthful. Fat between layers of protein makes a burger creamy, rather than dry. The layers of protein and fat are easy to bite into and chewy, but not soggy.

Chemistry contributes to the taste of meat analogues, Lovedeep notes, including how fatty acids like linoleic acid react with oxygen. ‘The fatty acid profile of meat is different to plant protein, so it’s not easy to get the real flavour of meat,’ she says. Flavour is, therefore, one reason why not everyone is keen to adopt plant-based meat analogues.

Another reason putting some people off is their worries about how healthy this new type of food is. Individually, ingredients like peas, soybeans and wheat contain similar protein levels to animal meat. But the amino acid balance in plant proteins is different to the animal versions. To make them more similar, meat analogues need to use a mixture of ingredients. Even then, animal proteins are easier to digest than most plant proteins, other than perhaps soybeans. 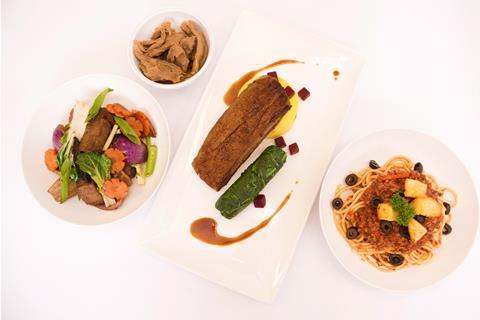 Jaspreet and his team are developing hybrid meat analogues containing some animal protein, which they say are more like meat than plant-only versions. They either add milk or less commonly eaten animal parts to the hybrid products. It’s difficult to integrate plant and animal protein using extrusion cooking, Jaspreet says, so he and his colleagues are developing different ways to make their hybrid meat analogues.

Whether flexitarian, vegetarian, vegan or omnivore, you can already buy everything from plant-based chicken to meatball analogues in many shops. You can also buy meat analogues at some large fast-food chains. Impossible Foods is well-known across the world because its products use a clever trick to look more like meat than other plant-based analogues.

Want to read more articles with associated classroom activities? Sign up for our newsletters.

Beef, pork and other red meats get their colour from a protein molecule called myoglobin. Myoglobin’s structure includes a ring of carbon atoms with an iron atom and several nitrogen atoms inside, called a haem, which can grab oxygen molecules such as those in the air. When you cook meat, the heat breaks down myoglobin, so it loses its grip on the oxygen, turning the meat brown. A rare steak should be pink on the inside as it has stayed cool enough that the myoglobin doesn’t break down. But plants can also make haem proteins. Impossible Foods uses plant-based haem proteins to make its products brown more like animal meat, even appearing to bleed. 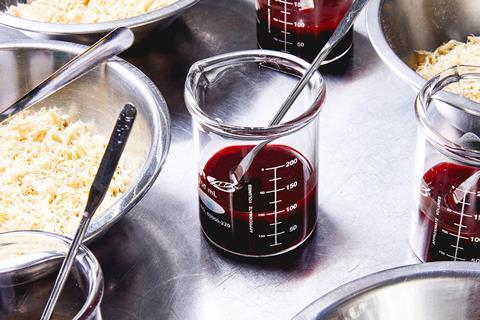 Just how does Impossible Foods make its plant-based products appear to bleed? With plant-based haem proteins

There is another meat alternative that uses no plants at all. That is cell cultured meat, sometimes called lab-grown meat. The approach uses starter animal stem cells taken from living or recently killed animals rather than whole animals. Companies put stem cells, which can transform into other cell types, in vats where they have everything they need to grow. There they can multiply into a larger, meaty form.

You can’t easily try cultured meat though. The first ever burger was made from cultured cells in 2013. Then, an American food writer got the chance to try it. ‘It wasn’t unpleasant,’ was his less than enthusiastic verdict. In 2021, there are over 30 companies developing cultured meat. However, you can still only buy it in a few restaurants, made exclusively by the company Eat Just, which gets its starter cells from live chicken feathers.

Among the scientists who have been working to improve cell cultured meat is chemical engineer Marianne Ellis at the University of Bath. She has co-founded a company, Cellular Agriculture, which designs bioreactors for culturing meat. Bioreactors help sustain the stem cells, providing them with the biochemical building blocks (such as amino acids, sugars, salts and proteins) needed to multiply. The cells may also need a biomaterial scaffold structure to grow on and some heat to start with. In one set of experiments, Marianne’s team grew pig cells on blades of grass to produce slaughter-free bacon.

After the stem cells have grown enough, the scientists add more biochemicals to turn them into muscle cells or fat cells. The challenges of this process, perhaps surprisingly, are a lot like those faced by plant-based meat analogues. The cells must be organised so that they feel like natural meat when we bite and chew. And they must have the right chemical composition to taste right when cooked.

‘The most important chemical consideration for cultured meat is to achieve a high protein content,’ Marianne says. ‘As a chemical engineer the goal is to achieve this in a manufacturing process with high quality and efficiency and in a sustainable way.’ Meanwhile, nutritional content largely depends on the product formulation, Marianne says. Currently, although the technology is mostly limited to the equivalent of mince and products made from it, the protein produced is equivalent to animal meat, she adds. And it can be produced without suffering or cruelty, especially if researchers who are currently trying to remove the need to take cells directly from animals succeed.

‘Cultured meat in its basic form of muscle cells is a real component of animal meat,’ Marianne explains. While she hasn’t yet tasted it herself, Marianne has been told that today cultured meat ‘tastes like real meat and smells like real meat when cooking’. Cultured meat could be ‘an important foodstuff to diversify protein sources,’ she says, ’because it is produced in a controlled environment this could be made anywhere in the world.’ She guesses it could become widely available by 2023. 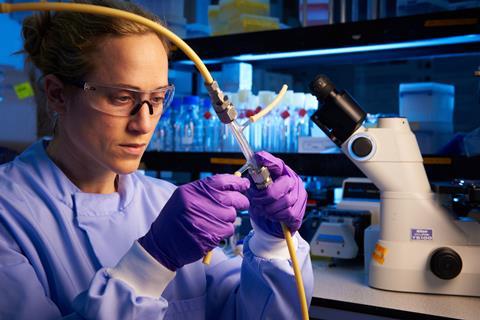 Best estimates suggest cultured meat has a lower environmental impact than the traditional meat industry, Marianne adds, especially beef. One study suggests that it uses 99% less land, 82–96% less water, and produces 78–96% less greenhouse gas emissions. Estimates vary a lot though, because cell cultured meat isn’t sufficiently well established for people to know how it will be made in the future. One important factor is that bioreactors must be steam-cleaned for hygiene, which takes a lot of energy. That, in turn, can produce a lot of greenhouse gas emissions if the energy comes from burning fossil fuels.

Jaspreet concludes that, with many of us wanting to cut our meat intake, we will get used to these new meat analogues. He says that we don’t really want a noticeable change, though. He thinks the change will be a bit like people going from white bread to wholemeal via multigrain breads. Hybrid meat analogues will probably be easier for people ‘to make a part of their shopping list,’ Jaspreet suggests.

Article by Andy Extance, a science writer based in Exeter. Resource by Nora Richardson, a curriculum lead, experienced examiner and chemistry teacher in Wales