The chemistry of candles 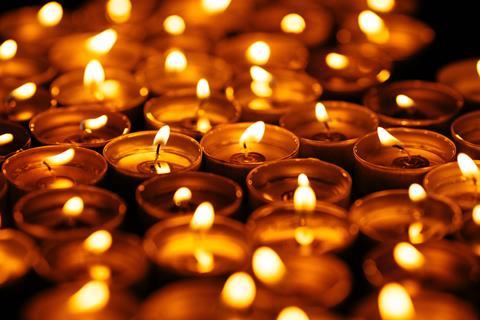 Have you ever used chemistry to make light? You probably have, but might not have thought of it as chemistry. Before electric light was commonplace, all artificial light was produced using chemistry. Light is often the result of combustion or heating, or both. A simple fire produces light because the sticks or coals get sufficiently hot to glow red – red hot. Gas was widely used for streetlights and in the home, but a gas flame itself does not produce much illumination. It was found, however, that heating a substance such as lime (hence the term ‘in the limelight’) or a mantle impregnated with thorium produced a brilliant white light. This principle is still used in mobile lighting and gas lamps used for camping, although thorium has generally been replaced by other elements such as yttrium, zirconium and cerium.

Scientists at NASA have been experimenting with flames on the International Space Station. Watch this video to see the strange, cool-burning form of fire they have discovered.

Scientists at NASA have been experimenting with flames on the International Space Station. Watch this video to see the strange, cool-burning form of fire they have discovered (http://bit.ly/1bCFOhB). 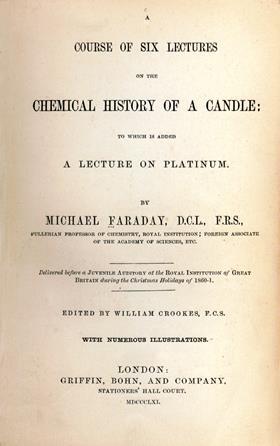 A convenient source of chemical illumination is the humble candle. The candle was the centrepiece of one of the most famous series of popular science lectures. The six Christmas lectures delivered by Michael Faraday at the Royal Institution in December 1860 and January 1861 were on The Chemical History of a Candle. Circumstances conspired to force Faraday to recycle some material from earlier Christmas lectures, yet these form a coherent whole and the book based upon the lectures has not been out of print since its first publication in March 1861.

Over the course of the lectures Faraday demonstrated to his audiences of around 700 many aspects of the chemistry relating to candles. Starting with how candles can be produced, he ranged far and wide and covered, using deceptively simple experiments, chemical themes including the composition of the gases produced on burning and the structure of the flame itself

The shape of the flame

In a burning candle, wax is drawn up the wick by capillary action and evaporates, so what is burned is a gas. The heat of the flame produces an updraught of air that draws the flame into its familiar shape. In zero gravity there is no ‘up’ and a flame forms a sphere. In both cases, the fuel only burns in the region where the mixture of oxygen and fuel is correct.

We can test this in several ways. First, read thoroughly the safety information below. Then take a sheet of paper and hold it in the candle flame a short distance above the end of the wick such that it burns but does not ignite. The mark should appear as a circle, showing the flame is hollow. You may need a few attempts to see this. To show it is not liquid wax that burns, simply blow out the candle and before it cools too much bring another flame to the wick from above. The candle flame will reignite before the other flame touches the wick – it is the remaining cloud of gaseous wax is what burns. A piece of cold metal held in the flame for a short time will collect soot from the flame but also small droplets of condensed wax.

These and many other simple, yet extremely effective, experiments that revolve around the chemistry of a candle are part of the series of lectures. These, and a commentary, are included in a new edition of Faraday’s book.

These and many other simple, yet extremely effective, experiments that revolve around the chemistry of a candle are part of the series of lectures. These, and a commentary, are included in a new edition of Faraday’s book (http://bit.ly/1Fxt7yS).