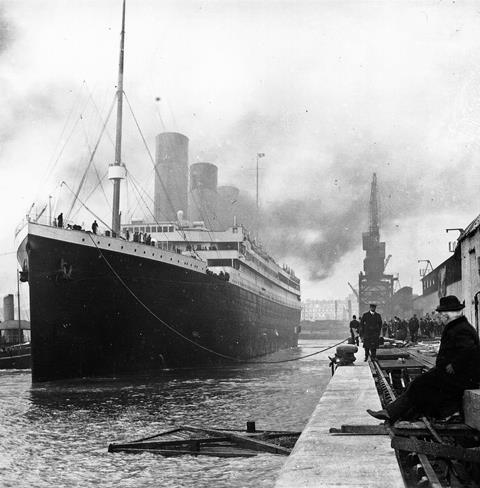 Titanic at Southampton docks, prior to departure seen from the bow

It’s 100 years since RMS Titanic collided with an iceberg on its maiden voyage, killing 1517 people. The story was made into the 1997 epic film Titanic (starring Leonardo DiCaprio and Kate Winslet) which won 11 Oscar awards and was the first film to earn a billion dollars at the box office. What is the latest scientific thinking about the tragedy?

The Titanic, the largest passenger steamship in the world at the time, was built in Belfast in 1912. It was constructed from thousands of one inch thick mild steel plates and two million steel and wrought iron rivets. She was supposed to be virtually unsinkable. The wreckage site was discovered in 1985 and in October 2011 detailed films were made of the remaining two parts of the ship which now lie half a mile apart in very deep sea.

A number of theories have been put forward to explain why the Titanic sank so quickly. Analysing samples from the wreck, Tim Foecke’s group (National Institute of standards and Technology, Maryland, USA) has recently suggested that it may have been simply the chemical composition and material properties of rivets used in the ship’s construction.1

Analysis of fragments of the metal sheets showed that they were of high quality. Analysis of the steel rivets (used in the hull) showed they too had good strength, but the wrought iron rivets (used in the bow and stern) contained an average of three times more slag from smelting than optimal levels. These impurities, being of relatively large particle size, weakened the mechanical properties of the iron making it brittle, causing the ship’s metal plates to come apart. With hindsight it now seems that these rivets were loaded dangerously near to their strength limit when the Titanic was built.

Could more have been saved?

Looking back through the 1911 construction company meeting notes they found that the poor quality rivets were sourced from uncertified suppliers in order to build the Titanic on time. Foecke believes that this ultimately led to the relatively quick sinking of the Titanic. They are not suggesting that better quality rivets would have completely saved the ship, but that it might have taken longer for the ship to sink. Timing was everything for the rescue mission. The Titanic took 2 ½ hours to sink and It is believed that if it had taken a few hours longer the death toll would have been much lower.