Trouble in the periodic table

As chemists, we see the periodic table as an icon. But its design continues to evolve and is the source of much debate

The periodic table has been around for almost 140 years and has survived many revolutionary discoveries including that of subatomic structure and the development of quantum mechanics and relativity.

The order of the elements was originally provided by their increasing atomic weights (figure 1) but it was later found that atomic number provided a better ordering principle. For example, the elements tellurium and iodine fell perfectly into place according to their chemical behaviour but their position in the table would have been inverted if ordered strictly by their atomic weights.

Order for the elements 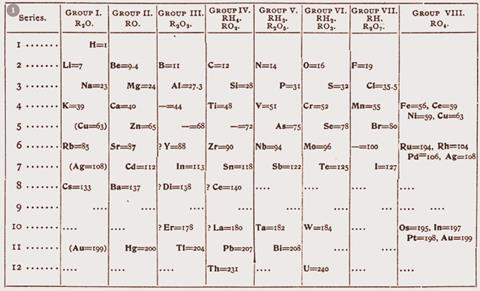 Take a look at all our articles and resources about the periodic table of elements or visit our interactive periodic table, featuring history, alchemy, podcasts, videos, and data trends.

The modern explanation why the elements fall into vertical columns, showing similar properties, has been provided by quantum mechanics and describes the shell structure of electrons orbiting the nucleus of each kind of atom.

The elements in group 1, for example, all have one outer-shell electron although they differ in their inner shell structures.

It is the outer-shell electrons which govern their chemical properties and that's why they behave similarly. For instance, all these metals react with water, although the reactivity increases as one descends the group from lithium to potassium and beyond to caesium and rubidium.

An abundance of designs

Given these basic facts it is a little surprising to find so many different forms of the periodic table.1 Over 1000 of them have been published in articles or on websites.

Curiously the first two elements, hydrogen and helium, present something of an anomaly and there has always been some disagreement as to exactly which groups they should be assigned to. In the conventional modern periodic table, known as the medium-long form, these elements fall into groups 1 and 18 respectively - the alkali metals and the noble gases (figure 2). 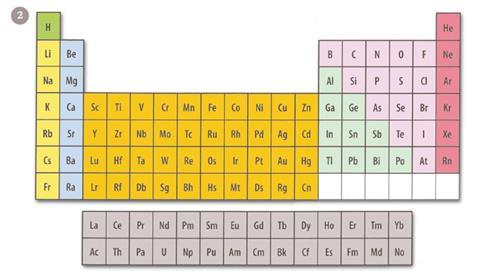 The result is a rather awkward twin-tower shape to add to the already uneven shape the periodic table has. The initial unevenness occurs because the alkali and alkaline earth metals fall on the left as a tall block followed by a shallower ten element-wide block containing the transition metals. This is followed on the right edge by another taller block, which is six elements wide and contains a mixture of metals, semi-metals and non-metals.

In quantum mechanical terms these blocks are characterised by the filling of (from left to right) s orbitals, d orbitals and p orbitals. There is a further oddity in the disconnected block of elements that appears as a kind of footnote to the entire system. These elements involve the filling of f orbitals.

A place for helium

Another more regular representation, the left-step table (figure 3), was proposed almost 90 years ago by the Frenchman, Charles Janet.

Recently this form has enjoyed a revival because it also seems to display the order of orbital filling more clearly than the conventional form.2 It also displays the elements in one continuous sequence without any gaps or interruptions. There is an annoying drawback in that the element helium is removed from its usual place among the noble gases and moved to join the alkaline earths like beryllium, magnesium and calcium.

This move can be justified on the basis of the outer-electron structure of helium, which possesses two such electrons, as do the members of the alkaline earth group. From a chemical point of view, the placement of helium among these metals amounts to complete heresy. While helium is the most unreactive of all the elements in the periodic reactive. This question of where to place helium is one sign of trouble in the periodic table.

Even the first element, hydrogen, has been causing trouble for some time. It can both lose as well as gain an electron. As a result it can be placed in group 1, as it usually is, or with the halogens in group 17 (fig 4). It has even been suggested that hydrogen should be grouped at the head of the carbon group since, like carbon, its atom has a half-filled outer shell. 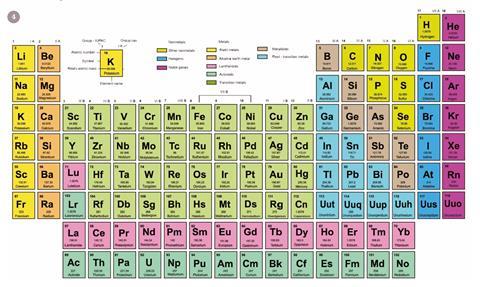 Figure 4 - A periodic table with hydrogen in group 17

Some authors avoid the hydrogen-helium problem altogether by removing them from the main body and by allowing them to float above the rest of the table.

More recently it has been suggested that the left-step table could be modified to avoid the heresy of placing helium among the alkaline earths. This new version relocates hydrogen to the top of the halogens, while retaining the overall form of the left-step table (figure 4).

There is an additional bonus in presenting the periodic table in this manner. Janet's original left-step table leads to the loss of a perfect atomic number triad, in moving helium out of the noble gas group, whereas this new table retains the helium triad.

A triad is the name given to a group of three elements falling vertically in any group of the periodic table. The atomic number of the middle element is the average of the elements above and below it.

Another form of trouble lies in group 3. Many textbook and wall-chart periodic tables show group 3 as consisting of the elements scandium, yttrium, lanthanum and actinium. A similar number of tables show a difference in the last two elements by featuring lutetium and lawrencium instead.

Although there are some quite convincing chemical and physical analogies in favour of the greater similarity among the second set of four elements, not everybody has been persuaded to make the change.3

What seems to be lacking is a categorical criterion.4 Once again the notion of trying to maximise the number of atomic number triads in the periodic table may provide such a criterion. Looking at the second choice of four elements, Sc, Y, Lu, Lr then the last three form a perfect triad. However, the last three elements among the group Sc, Y, La and Ac do not (table 1).

Moving to the super-heavy elements at the other end of the periodic table, we find even more trouble, or at least that is how it seemed until a few years ago. 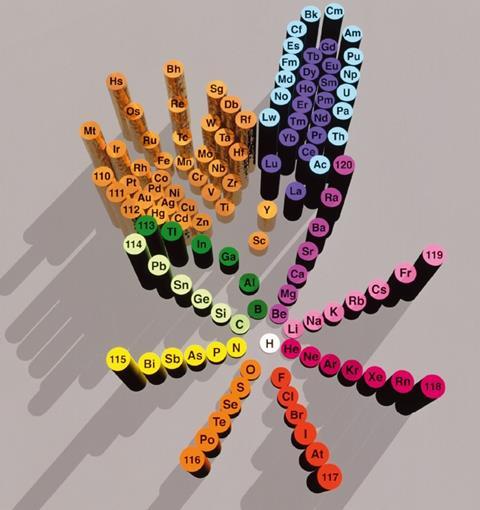 The periodic table has had some interesting redesigns...

It has been known for some time that the heavier the atom the more relativistic effects begin to play a part. As the charge of the nucleus of an atom increases, the velocity of the inner electrons also increases. If velocities are high enough, this may cause distortions to the orbitals of an atom and, as a result, modify its chemical properties.

Initially, when they were first synthesised, the chemical reactions of elements 104 and 105 (rutherfordium and dubnium) could not be examined as the lifetimes of their isotopes was extremely short. But after some years other more stable isotopes were synthesised and chemical experiments were conducted.

For example, rutherfordium falls into group 4 and would therefore be expected to behave like its fellow members, zirconium and hafnium. Experiments carried out in the 1990s showed that the relativistic effects were significant enough to make rutherfordium and dubnium behave anomalously. For example, RfCl4 was found to have an anomalously high volatility. 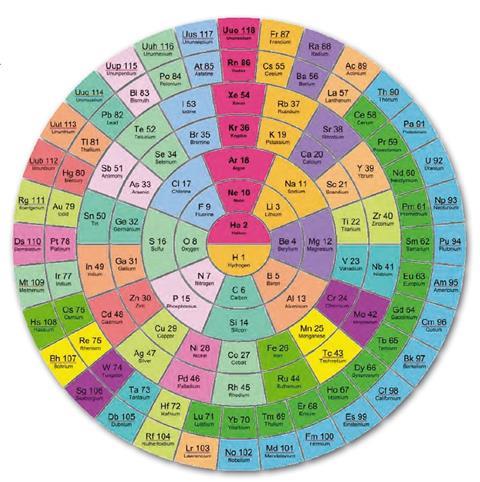 The Mayan periodic table of elements is based on electron shells. The shells are shown as concentric circles. Each row in the tabular form is shown as a ring.

Soon even higher elements were synthesised. Not surprisingly these were expected to behave even more anomalously due to their even higher atomic numbers but as it turned out this is not what happened.

When the chemical properties of element 106 (seaborgium) were examined the titles of the news reports included the words 'Boring seaborgium'. When element 107 (bohrium) was synthesised and later examined chemically, it too showed that chemical periodicity was back in business.

What had begun to seem like a threat or trouble for the periodic table turned out to be a short lived concern. The classification of the higher atomic number elements is still very much governed by the periodic table regardless of the presence of relativistic effects.

Going back to bohrium, we can consider some quantitative data that has been obtained on this element in order to examine the question of its classification more closely.

As we have seen, the concept of triads of elements has been around much longer than periodic table. The concept was initially discovered by the chemist Döbereiner, a good fifty years before Mendeleev published the first fully mature periodic system.5

As a result of this pattern, any three elements that fall vertically in the periodic table will provide a perfect triad if the second and third of them are members of periods of equal length. 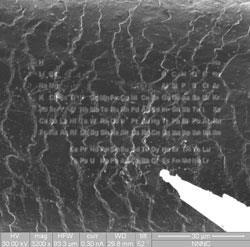 The world's smallest periodic table, etched on to a hair

What does all this have to do with element 107?

If we consider the sublimation enthalpies of TcO3Cl, ReO3Cl and BhO3Cl, the values are 49, 66 and 89 kJ mol-1 respectively. If one had tried to predict the value for bohrium from those of the other two on the basis of the triad principle, the prediction would have been 83 kJ mol-1, which is only 6.7% away from the experimental value.

This small error helps to support the notion that bohrium belongs firmly in group 7 irrespective of any relativistic effects.

When Mendeleev made his famous predictions of the properties of gallium, germanium and scandium, he essentially used triad-like calculations. In fact just for good measure, he used triads in two directions.

For example, he explained how the atomic weight of selenium could be predicted although it was actually known and could be used to demonstrate the effectiveness of the method (table 2). 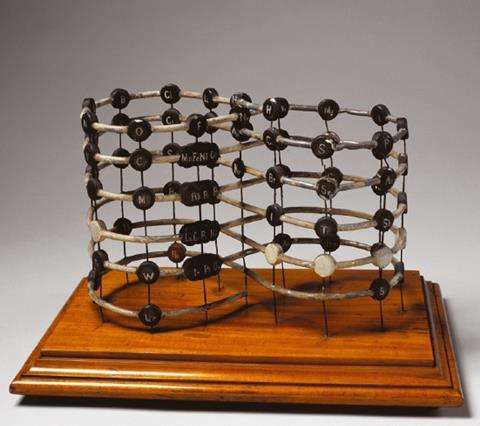 Crookes' spiral (1888) representing the order of evolution of the elements

To conclude, the trouble at the high atomic number end of the periodic table has now subsided at least for the time being. The trouble at low atomic numbers, namely hydrogen and helium, is still an open question.

In the conventional table, hydrogen and helium are seen to be well classified, but the table lacks regularity and contains awkward gaps between many elements. In the left-step table regularity is displayed to the greatest extent but chemists understandably worry about placing helium among the alkaline earths.

Whatever one might think about these debates the fact remains that the periodic system which the periodic table encapsulates and displays is one of the most remarkable discoveries in all of science. It provides an underlying relationship between all the 118 elements so far discovered or synthesised. Substances as diverse as gold, helium, sulfur, mercury and oxygen are all connected together in a two-dimensional array. This same two-dimensional array has also motivated numerous discoveries in atomic and molecular physics as of course many more in the field of chemistry.

Eric Scerri is a lecturer in chemistry and philosophy of science at UCLA, California, US.