In a recent homework I asked my A-level students to outline a mechanism, a straightforward nucleophilic substitution they had practised many times. But in a new context. I asked them to outline the nucleophilic substitution mechanism for an intramolecular cyclisation, an amine functional group attacking a C–Br to form a 6-membered ring. This was a challenging, but not impossible, question. Exposing students to challenging questions in a supportive environment can help to move them beyond algorithmic approaches where they automatically carry out a series of familiar steps without developing their reasoning.

Many organic reactions are between separate molecules of reactants. However, intramolecular reactions can occur between functional groups on the same molecule. Consider the reaction scheme given below:

Early career teachers can find it tricky to guide students when they are stuck with a problem. It is easy to rush in and model the correct answer; students, of course, really like this. But this won’t help them the next time they meet knowledge in an unfamiliar context. As teachers, we ideally want to help our students develop their reasoning skills so they can get themselves past the ‘stuck’ phase.

A step-by-step questioning approach can help students unstick themselves. Below is how I used this approach to help a student with this homework over an online learning platform, but it works just as well in person. 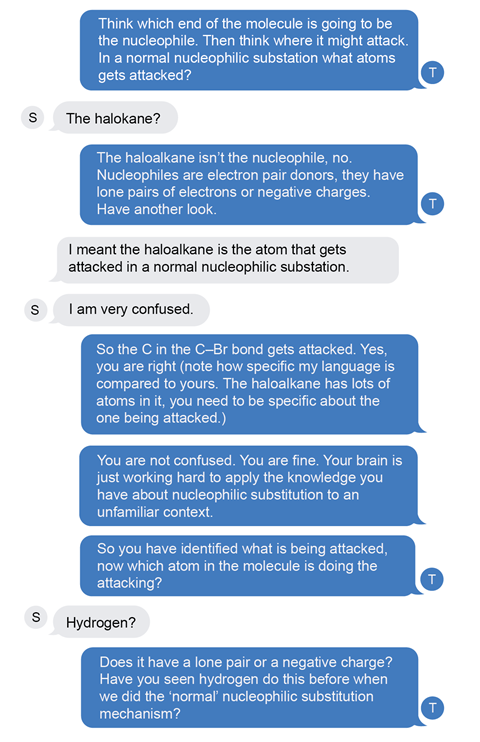 My first prompt is to focus thinking back to the fundamental chemistry, modelling the line of questioning students should use when they are stuck. The student’s response is incomplete, the language sloppy and it’s not clear what is being referred to.

Next, I acknowledge the partially correct thinking but model a better level of language. I also reassure the student that it’s OK to be struggling and prompt the next bit of thinking. They had correctly identified the atom being attacked but hadn’t yet identified the nucleophilic group which is attacking.

Next the student guesses. This is quite common, it’s a kind of fight or flight response. I ask them to think about their guess in the context of their existing knowledge. Have they seen that before? I remind them of the key definition so they can examine their thinking again. They guess again. 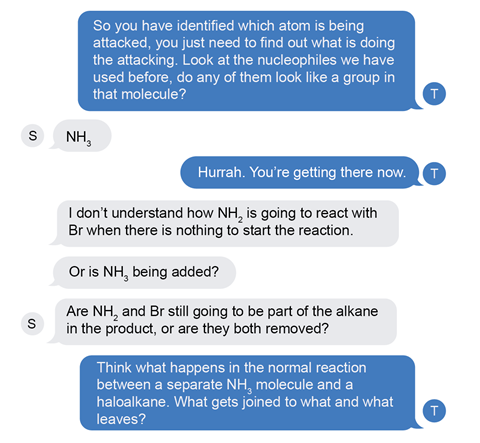 It’s time to encourage them to stop coming up with daft ideas (not in so many words though) and apply their knowledge. Again it’s a prompt to refocus on the core fundamentals and the knowledge they are familiar with.

This leads them to recall a nucleophile (NH3) that they can apply to the molecule. With a little bit of encouragement they identify the NH2 as the functional group that is acting as a nucleophile.

Their next questions show some depth of thought, they’re wondering how the reaction happens. Again, I redirect them to what they already know, to the nucleophilic substitution mechanism between two species. At this point they attempt the mechanism, but they’re not confident. 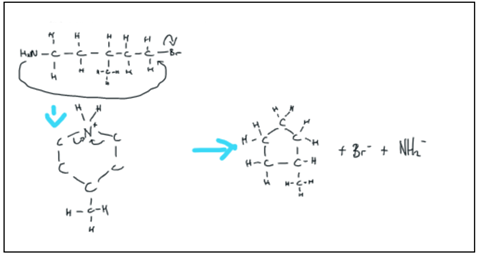 It is a good start, with correct arrows for the attack of the nucleophilic atom and the loss of the leaving group and a correct cyclic intermediate. After that, things go wrong with a couple of crazy arrows as they attempt to get rid of the nitrogen from the ring. Remember that before this they had never really seen a heterocycle; cyclic alkanes are much more familiar. Again I prompt them to think about their prior knowledge in the familiar, bimolecular context.

As we approach the end of the conversation, their language is much improved and I acknowledge this. They haven’t chosen the right species to deprotonate, but they are recognising it is a deprotonation step. At A-level they don’t actually need to show the species that is acting as a base, but I do teach this generally, hence the student is considering it. Again they guess, looking for a more obvious base than the amine group in the molecule. 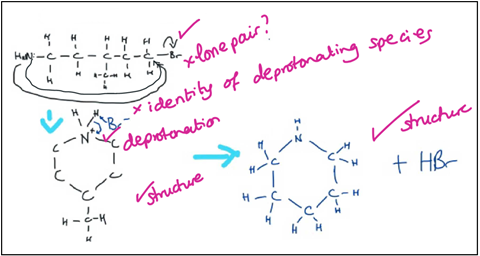 Their final attempt is very nearly correct. They are now happy that the nitrogen is incorporated in the ring. Despite the hints given they are still using the wrong species to deprotonate, but they have learned a lot over the course of the homework exercise and our conversation.