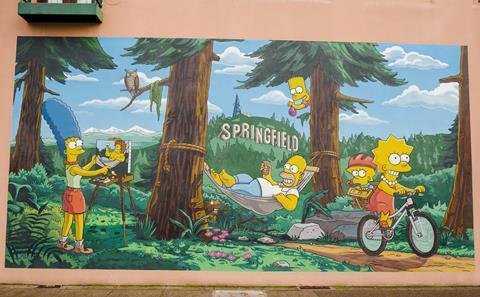 A mural of The Simpsons family painted in Springfield, Oregon. Homer, Marge, Bart, Lisa and Maggie all have personal traits that combine to make each episode

Science writer Simon Singh has recently written about the maths in the TV show The Simpsons in his book The Simpsons and their mathematical secrets. For example, in the episode ‘MoneyBart’, Lisa is seen next to a book titled eiπ + 1 = 0, a famous equation called Euler’s identity. Simon talks about how many of the show’s writers have maths degrees.

This might explain why the chemistry references in the show are neither as abundant or as accurate. In ‘Bart the Genius’, the Simpson son is seen preparing two chemicals. His teacher asks, ‘You do know what happens when you mix acids and bases, don’t you?’ ‘Of course I do!’ replies Bart. As he mixes them together, a jet of green gunk erupts from the test tube and coats the room. This terrible misrepresentation of chemistry can be explained away as creative licence, but is it possible that the show could teach us something about chemistry?

There are roughly as many characters in The Simpsons as there are elements in the periodic table. According to the Chemical Abstracts Service registry, the 118 elements can be used to make more than 90 million unique organic and inorganic chemicals. Similarly, the one hundred or so permanent ‘cast members’ of The Simpsons have been combined in different ways throughout the show’s history to produce more nearly 600 episodes.

The Simpsons episodes are shaped by their composition, for example episodes with a high ‘Lisa content’ explore moral themes. This is like the way that characteristics of a compound are influenced by the elements it contains. Large compounds rich in carbon generally make good fuels, such as carbohydrates and fats. Halogen-containing compounds are frequently used for hygienic purposes, such as sodium hypochlorite (NaClO) in bleach.

This is not the only interpretation possible for the airtime of different characters. Elements vary in abundance. The five most abundant elements in the Milky Way galaxy are hydrogen, helium, oxygen, carbon and neon. There is three times as much hydrogen as the rest of the top 10 put together. If Homer is the Simpsons character with the most air time, then he must represent hydrogen. His family members Marge, Bart and Lisa would be the next most abundant: helium, oxygen and carbon. Meanwhile, the characters that we enjoy only fleeting glimpses of, such as Bumblebee Man who only features for a few seconds in the episode 22 short films about Springfield, might represent an element like astatine, of which only about enough to fill a teaspoon currently exists on Earth.

The importance of being Homer

Elements also vary in their frequency of use. Millions of tonnes of iron, aluminium and copper are used each year to build things like buildings, cars, aircrafts and electrical circuitry. Carbon and hydrogen are also used heavily as they form the backbone of the polymers that are used to make plastics. Each member of the Simpson family could represent one of these useful elements, as they are such a key feature of the show.

Chief Wiggum and Mr Burns, supporting characters that often play a key role in the plot of an episode, might represent an element like gallium. This metal is used in many transistors, the electronic component that made the development of computers possible. Despite the importance of gallium, only about 273 tonnes were produced worldwide in 2012, compared to 16,800,000 tonnes of copper.

Finally, those rarely-appearing characters, such as the inept salesman Gill, might represent those elements for which no use has yet been found. Thanks to its 8.1-hour half-life, no use for astatine has been found outside of research.

The Simpsons provides an interesting way to view chemistry. What the two things have in common is that a small number of building blocks can produce a dizzying array of different combinations. And what keeps us watching the many permutations of The Simpsons? The chemistry between the characters. What do you think?

Dudley Herschbach, who won the Nobel prize for chemistry for his work in understanding the way molecules react, appeared on The Simpsons to present Professor Frink with his own Nobel prize.