Soap: can you make it with body fat and is there an explosive spin-off? 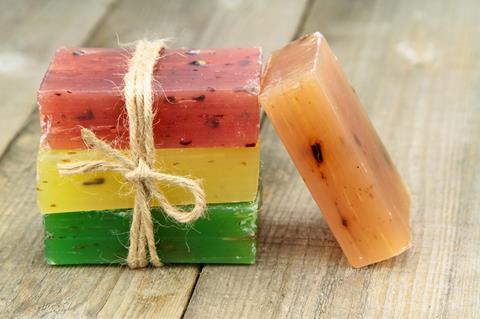 Tyler, the main character in Fight club, has set up a rather anarchic club. Rather surprisingly he part-funds his operation by selling home-made soap at high prices to beauty saloons and shops. While he demonstrates making the soap he says: 'ancient people found that their clothes got clean when they washed them in a certain point in a river... because of human sacrifices of ones made above the river... bodies burned, water seeped through the wooden ashes to create lye... once it mixed with the melted fat of the bodies a thick white soapy discharge crept into the river'. A truly gruesome part of Fight club is that they use human fat stolen from liposuction clinics as the tallow to make their soap! Tyler claims that these soaps are the creamiest possible. Can you really use body fat to make soap?

Soaps are sodium or potassium salts of fatty acids. Alkalis such as sodium hydroxide produce solid soaps suitable for making into bars while potassium hydroxide is used to make liquid soaps. They were originally made by boiling lard or other animal fat together with alkali. The old name for alkali was 'lye' and the fats were called 'tallows'.

Early peoples might have found that rubbing their hands in wood ash and then washing them in water was a way of cleaning them, because ash contains alkalis that react with dirt and grease (fats). So while Tyler's story may not be historical fact parts are at least plausible.

Animal fat tallows from cows, such as lard, are often used for soap making as are palm, olive and coconut oils. Coconut oil makes the soaps smell nice and makes them creamy. So the creaminess of soaps is down to the coconut oils rather than the animal fats. Hopefully we shall never know for sure about the creaminess of the Fight club soap.

In the process of making soap, the fats and oils are hydrolysed (saponification), yielding glycerol (glycerine) and crude soap. Sodium chloride can be added after the reaction which helps precipitate the soap.

Nitric acid reacts with glycerine to make nitroglycerine but concentrated sulfuric acid is also needed to absorb the water produced. Nitroglycerine is explosive and shock sensitive. In 1866 Alfred Nobel discovered that by adding kieselguhr, to make a sort of paste, he could make a much more stable explosive which he called dynamite. Kieselguhr is a naturally occurring siliceous material and presumably what Tyler is referring to when he says 'add a dash of saw dust'.