Get students more comfortable with concepts such as moles, ratios and reagents with this cooking equations worksheet 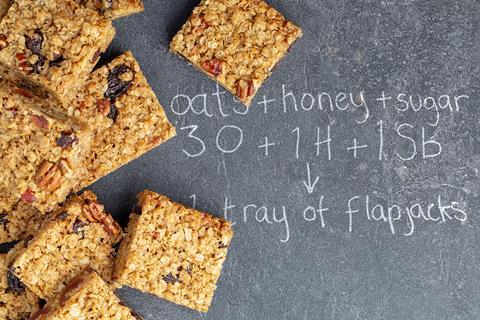 Cooking is a fun, accessible introduction to why we use balanced equations

Stoichiometry and reacting masses in chemical equations can be a difficult concept for students to initially engage with. One relatable way to introduce the topic is by comparing it to cooking.

Recipes are used to mix ingredients in the right ratios to make the correct quantities of food; if we think of chemical equations like recipes, with moles telling us about the ratio of the ingredients, it can be a little easier for students to relate to conceptually and shows them how what they’re learning relates to real life. Excess ingredients can be compared to excess reagents, while having not enough of an ingredient can be compared to limiting reagents.

Use this worksheet alongside the Education in Chemistry article Baking with moles to introduce the topic of moles and balanced equations in the fun and accessible context of cooking. Students answer questions such as how many baking products they can make with certain amounts of ingredients, culminating in writing a ‘formula’ for flapjacks based on the ratios of the constituent elements and exploring formula mass.