Use recipes as a fun, accessible introduction to why and how we use balanced equations and your students will be cooking on gas 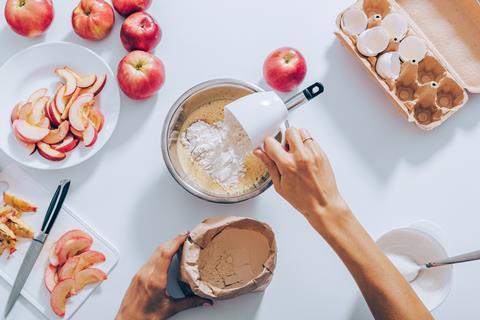 The concept of stoichiometry and reacting masses in chemical equations is a difficult one for students to initially engage with, despite the maths being relatively straightforward. They often struggle with balancing chemical equations and then converting to formula masses and using simple ratios. I have found, however, that it is not necessarily the actual calculations themselves that pupils struggle with – they will be quite capable mathematically; it is rather the barrier of an unfamiliar context that inhibits them engaging with the theory.

I find that cooking is a fun, accessible introduction to why we use balanced equations. After covering formulas and balanced equations, I introduce the definition of a mole and then use the idea of recipes to illustrate why balanced equations are so important and how they work in a relevant, relatable way. At this stage I would not have covered titrations or gas volumes.

A cooking equations worksheet to get students more comfortable with concepts such as ratios, reagents and gram formula mass from the Education in Chemistry website: rsc.li/LINK

In American recipes the unit of ‘cups’ is used to mix ingredients in the right ratios to make the correct quantities of food. The cup is used as a standard measurement – and using this analogy, the ingredients would represent an element from the periodic table and the cup would be equivalent to the chemistry unit of the mole. The mass of each cup would represent the atomic or formula mass of an element or compound.

The table below shows invented masses for ‘cups’ of different ingredients, and a suggested ‘chemical symbol’. In this way, the practical use of the mole can be demonstrated in the more relatable situation of cooking. For example, you can work out how many cups (moles) are in 256 g of flour – pupils will calculate 2 cups and think it a rather easy question. Pupils, as a class, could perhaps come up with their own symbols here in the introduction to the task themselves.

There are some simplifications of course. This ignores the fact that each cup does not contain the same number of ‘particles’ like the mole does, and that each substance is at best a compound, or a mixture of compounds. The atomic numbers are a slight distraction and only relate to elements in that they increase as atomic mass increases, but the approximate 1:2 ratio has not been kept. However, the concepts are well established and lead easily into questions involving mole ratios.

Moving on to equations, you can create simple recipes which provide the same framework for calculations using stoichiometry:

You can be quite creative here and ask questions on excess, product quantities and ratios, such as ‘What mass of oats are required to make one tray of flapjacks?’ (255 g), or, ‘If you have 150 g of honey, how many flapjacks can you make?’ (half of a tray). This concept can be extended to include excess and limiting reagents: if you had 6 cups of oats, 2 cups of honey but only 1 cup of brown sugar, then the brown sugar becomes a limiting reagent and the oats and honey are in excess. Conservation of mass can be another useful aspect of this exercise (but you need to assume any rising agent is trapped in the product).

It can be a conceptual jump for pupils to then develop this quite technical, rule-based section of the course into calculations using chemical equations,  particularly when they will not have performed most of the reactions used in example calculations. However, most will have engaged with some form of cooking. I have found this approach to be an accessible and easy format for the pupils to complete. The key is to relate cups directly to the mole as a unit of measurement after the exercise, and link this directly to chemical equations.

Duncan ShortDuncan has taught chemistry and science for a number of years in Fife and currently teaches in Falkirk.