The three youngsters were selected from the more than 7000 UK school students who entered the UK Chemistry Olympiad in January, run by the Royal Society of Chemistry. From that initial round, 36 of the top competitors went forward to the second round, from which the trio was selected. Due to national lockdowns, the two rounds took place remotely, as did the international competition organised by hosts Japan. The UK students were lucky enough to be able to meet up at the National Mathematics and Science College in Coventry for the final five-hour challenge.

Among the first to congratulate the students was the Royal Society of Chemistry’s director of education, Sarah Robertson, saying: ‘Many congratulations to Alex, Harry and Zachary on their achievements at the finals. These impressive results reflect a huge commitment by the competitors, as well as the extraordinary efforts of the team supporting them.’

Recognising the team work involved in getting to the finals, Sarah added: ‘We’re particularly grateful to members of the Olympiad Working Group who give their time and expertise so generously and to our colleagues who have worked closely with them during this unpredictable year.’ Dr Ben Pilgrim of the University of Nottingham and head mentor for the UK delegation also noted the importance of the team, saying: ‘This performance is not only a testament to the students’ hard work and dedication, but also to all the teachers and parents who support all students behind the scenes.’ 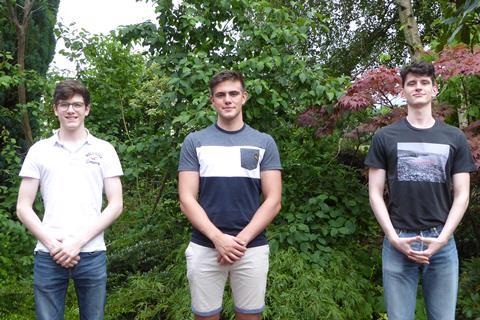 ‘We are all absolutely delighted with the performance of Alex, Harry and Zac,’ Ben continued. ‘All students at the IChO are the best of the best from their own countries. To be selected for your country is a huge honour and winning any medal is a remarkable achievement.’

Usually four students represent the UK in the final, which makes the team’s achievement even more special. This is the third best result the UK has achieved at the IChO in 38 years of competing, said Ben, adding that ‘these students have faced unprecedented disruption in the last two years of their education.’

Chloe Francis, RSC coordinator of the UK Chemistry Olympiad, was also keen to recognise the support of those involved in making the IChO happen. She said: ‘We would also like to thank staff at the National Mathematics and Science College for hosting the UK team during the remote final, and Rtvik Patel from Winchester College for playing an important part in training.’

Reflecting on his journey to the international final, gold medal winner Alex Thow said: ‘Over the past few months I have had the privilege of being mentored by some brilliant people who have taught me an invaluable amount.’

Fellow gold medal winner Harry List also noted the input of the mentors, saying they ‘were so generous with their time and effort, with lectures that were more like discussions, giving us a very strong grasp of some difficult topics. This has been a hugely enriching experience that I know will set me up well for further studies in chemistry.’

Echoing Harry, Zachary McGuire also describes the training as an enriching experience ‘that deepened my knowledge and appreciation of chemistry.’

Finally, summing up their experiences Alex said: ‘The Chemistry Olympiad is an amazing opportunity for aspiring young chemists to nurture their love for the subject. Even with the international final being held remotely this year, the overall experience has been incredible.’

Inspired to enter students in the UK Chemistry Olympiad? Applications open for the 2022 competition on 20 September 2021.