Brian Woodget names the winners of the 2014 Schools’ Analyst competition and thanks all sponsors, students, teachers and universities who contributed to the heats and final. In his final report after ten years of coordinating the final Brian Woodget hands over to Prof John R. Dean with well wishes and luck.

On the 23/24 June, the final of the 2014 national Schools’ Analyst Competition was held at the University of Central Lancashire (UCLan) in Preston. This was one of the first universities in the UK to restart the teaching of chemistry at degree level following a resurgence of the interest in students taking A levels in Chemistry. In addition to this course, the university offers a very successful degree in forensic science where of course there are many synergies between the two disciplines.

For this year’s final, Dr Robert Smith and William Stockburn from UCLan devised a programme of experiments around a forensic theme. The teams had to carry out an EDTA titration, quantitative analyses involving fluorescence spectroscopy and HPLC and a qualitative evaluation using specific chemical tests.

The winning team of Year 12 students came from Charterhouse School in Surrey and were one of the three schools representing the South East Region of the Analytical Division. Figure 1 shows the winning team comprising Anthony Wong, Max Thomas and Bettina Chan. 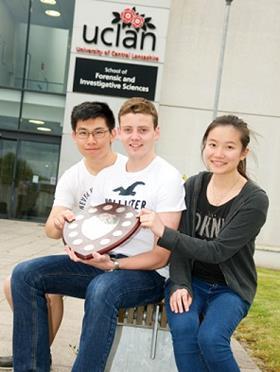 The school received a prize of £1000 together with Amazon vouchers of £50 to each of the three team members. The school will hold the new shield until June next year, this being the second occasion on which they have won the competition.

It was impossible for the judges to separate the two teams that came second and therefore the judges agreed on this occasion, to award two second prizes to Down High School from Northern Ireland and Holyhead High School from North Wales, one of the representatives of the North West Region. Each of these schools received £600 with the team members receiving £30 vouchers each. The team coming third was from Varndean College in Brighton, again from the South East Region, and they received £300 and £20 vouchers to each of the team members. The judges for this year’s competition were Professor John Dean (University of Northumbria), Dr Andrew Morrison (Robert Gordon University) and Brian Woodget (Coordinator for the National Schools’ Analyst Competition), who also chaired the judging panel. The prizes were awarded by Alan Handley (LGC North West), President of the Analytical Division.

The organisers of the competition would like to express their thanks to the university for agreeing to hold the event and for providing excellent technical and administration support. In particular, we would like to thank Dr Robert Smith, William Stockburn,  Louise Oldfield, Sam Porter and Sal Tracy from UCLan for making the whole event memorable for all of the teams who attended.

The competition is sponsored mainly by the Analytical Chemistry Trust Fund, however during the 20+ heats held throughout the UK, many other companies, too numerous to mention, also provided financial sponsorship to support this national event. Without their help, the costs involved would be too prohibitive and some heats may not have been feasible. The final was also generously sponsored by the North West Region of the Analytical Division. To all of the sponsors, the Analytical Division expresses its gratitude. Subsequent to the final, we have received some complementary comments from a number of the schools who participated, saying how much their teams enjoyed the experience.

The 2015  final will be held at the Robert Gordon University in Aberdeen on 22/23 June.

This is the last year in which I have been responsible for coordinating the final of this competition. Professor John Dean from the University of Northumbria is now assuming this mantle. I should therefore like to take this opportunity of thanking everyone that I have met and who have helped me over the past 10 years of my involvement with this flagship event of the Analytical Division. Without the agreement of the universities to allow us to use their premises, the enthusiasm of the staff, both academic and technical, to develop and validate experiments and the additional help provided by the administrative staff in these universities, the competition would not exist. I hope that some of the year 12 students who participated in the competition, either during the heats and possibly the final, will have been enthused by their experiences to go onto study chemistry at university, and maybe choose analytical science as a career. I have certainly enjoyed my role as coordinator and wish John well for the future.