The 30th final of the Schools’ Analyst Competition, in the International Year of the Periodic Table (IYPT), was held on 19–20 June 2019 at the University of Manchester. All attendees were welcomed to the competition by Nikolas Kaltsoyannis (head of school of chemistry), Perdita Barran, Philip Riby (competition organiser) and myself (on behalf of the RSC Analytical Division and Analytical Chemistry Trust Fund (ACTF)). For this year’s final, Frank Mair devised a programme of experiments around the IYPT. The teams had to carry out multiple experiments involving a complexometric titration, mass spectrometry, colorimetry and inductively coupled plasma atomic emission spectrometry to identify an unknown element, gallium. In addition, the accompanying teachers had the opportunity to engage in some lab-based CPD. Finally, when the competition had finished and judging was taking place, the teams and accompanying teachers were entertained by Frank Mair with a stimulating lecture / demonstration entitled ‘Quantum of science’.

The winning team of year 12 students – Emily Hatchwell, Abby Shaw and Beth Fishwick, accompanied by staff Sarah Hale and Kate Bedford – came from King Ecgbert School, representing the North East Region of the Analytical Division. The school won a prize of £3000 and an engraved glass trophy on behalf of the sponsors, the ACTF, together with £75 Amazon vouchers for each of the three team members. 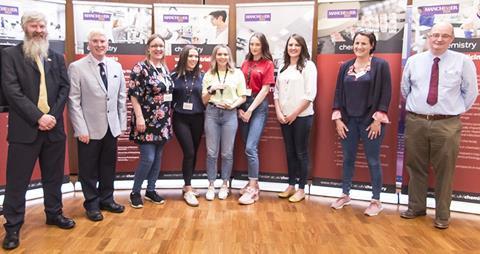 The runners-up were the team from Charters School, representing the South East Region. The school won £2000 with the team members (Edward Rivers, Oscar Brown and Kelsey English) each receiving £50 vouchers. In third place was Nelson and Colne College, representing the North West Region; the school received £1000 and £25 vouchers went to each of the team members (Taiha Chowdhury, Waheeda Khatum and Beth Waterhouse). The judges for this year’s competition were Philip Riby, Perdita Barran and myself, who also chaired the judging panel and awarded the prizes.

I hope that some of the first year sixth form students (aged 16–17 years old, year 12 / S5) studying A-level chemistry or equivalent who participated in the competition, either during the heats and the final, will have been enthused by their experiences to go on to study chemistry at university, and maybe choose analytical science as a future career.

SAC Group Final: All the finalists at the 2019 Schools’ Analyst Competition at the University of Manchester

The regional organisers consistently receive a range of complimentary comments from schools who participated saying how much their teams enjoyed the experience. So, if you would like to get involved please contact your Regional Analytical Division Committee to find out more about where the heats are held in your region, or contact me directly.

Heats of the 31st annual competition started again in January 2020 throughout each of the Analytical Division Regions and will culminate in the final, to be held at Kingston University on Wednesday 17 & Thursday 18 June 2020.

Expression of thanks and appreciation

Thank you for making the 2019 competition the most successful ever with 339 schools participating. Thank you to the 1017 year 12 students for their enthusiasm in actively engaging in analytical chemistry, and the teachers who have supported their students in attending the competition.

I would also like to thank all the Analytical Division Regions for participating in this year’s competition. The competition would not exist without the agreement of the universities to allow us to use their premises, the enthusiasm of the staff, both academic and technical, to develop and validate experiments and the additional help provided by the administrative staff in these universities.

The competition is sponsored by the Analytical Chemistry Trust Fund. However, during the 26 heats in which 339 schools participated throughout the UK and Republic of Ireland, many other organisations also provided financial sponsorship to support this national event. Without their help, the costs involved would be too prohibitive and some heats may not have been feasible. To all the sponsors, the Analytical Division expresses its gratitude.