Meet Omar Farha, a materials chemist who designs highly porous materials for applications ranging from gas storage to the destruction of nerve agents 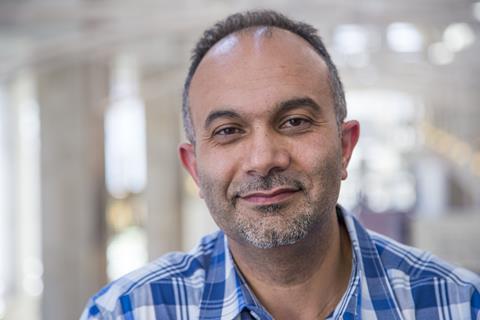 Omar Farha hails from the small village of Rammun in the West Bank, Palestine. He moved to the US in the mid-1990s to study science at Fullerton College near Los Angeles, where his passion for chemistry was ignited. A bachelor’s degree and PhD in chemistry followed, both at the University of California, Los Angeles. Then, in 2007, Omar moved to Northwestern University in Illinois, for a postdoc designing and making metal–organic frameworks (MOFs).

‘MOFs are a class of highly porous materials, which we can think of as nano-sized Tinkertoys,’ Omar explains. The Tinkertoy is a vintage toy set consisting of wooden dowels and joints from which a multitude of 3D structures can be assembled. MOFs have organic molecules in place of dowels and metal ions or clusters instead of joints, but are equally as programmable as the Tinkertoy. One of the most exciting properties of MOFs is their vast porosity. The internal surface area of one gram of a typical MOF produced by Omar’s team, for example, exceeds that of a football pitch.

Omar started his independent research career at Northwestern in 2009. His research group designs MOFs for a range of energy- and environment-related challenges. The destruction of chemical warfare agents is of particular interest. ‘The pores capture the nerve agent to slow diffusion, and then a catalyst (in the pores or a part of the MOF) breaks it apart into non-toxic components,’ he explains.

In 2012, Omar co-founded the spin-off company NuMat Technologies and in 2016 it launched one of the first commercial MOF-based products – safe storage cylinders for toxic gases used as dopants in the electronics industry.

A lecturer at the first college I attended in the US. The professor’s name is Tilahun Yimenu, and he made chemistry fun. He’s a great human, too. He inspired me to go after chemistry as a major.

Frederick Hawthorne. He was my undergraduate and PhD advisor. His career path was amazing.

Sir Fraser Stoddart. His life story resonates with me: he came from a very humble beginning, worked really hard, overcame lots of challenges during his career, and look where he is right now. He’s a Nobel laureate.

What’s your favourite part of your job?

Seeing a student, a postdoc, a visiting scholar or a NuMat scientist with a smile on their face because they have made or discovered something new.

What’s the hardest part of your job?

Time management: the juggle between mentoring, teaching, travelling and family. For me, this is always work in progress.

What’s your favourite class to teach and why?

Do you have a pet porous material?

NU-1000 – it’s a material we make. It’s pretty universal, and has allowed us to investigate many concepts without having to make a new material every time. 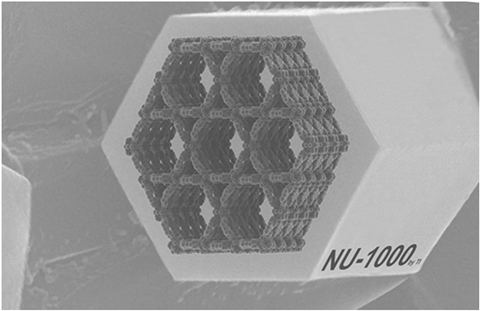 What is your must-have lab instrument?

The surface area analyser, because when we make a porous material, we need to be able to measure its porosity. That’s an instrument we use day in, day out.

What applications would you like to see MOFs commercialised for in the future?

The detoxification of chemical warfare agents under ambient conditions in a solid state; drug delivery; capturing water from dry air and the stabilisation of unstable species ranging from gas molecules to enzymes.

What are the biggest differences between research in academia and in a spin-out company?

In a company, the currency is making products and profit for the shareholders rather than publications. In academia, you can tackle a scientific curiosity where it might be many years before it becomes a commercial product, if ever.

Deciding what challenges to confront and tackle, how to fundraise to do that and also how I can be a better human. I want to make sure I leave the world in a better state than when I entered it.

If you could go back in time and make any historical scientific discovery, what would it be?

The discovery of antibiotics.

What do you like to do outside of the lab?

I like to spend time with my wife and two children. I like to travel and I like to exercise. I try not to talk about science when I’m not at work, but sometimes it’s hard.

Recently I visited Beirut in Lebanon. It’s an awesome place. The people there are very warm and welcoming, it’s a gorgeous place and the food is spectacular. It’s a really hard one to beat.