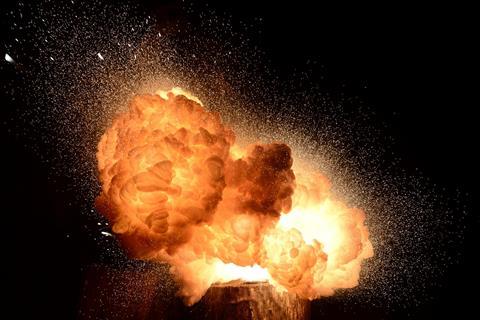 In Breaking Bad Walt is a high school chemistry teacher turned bad, ‘cooking up’ amphetamine (crystal meth) with his partner Jesse. Their starting material for the crystal meth is an over-the-counter drug from the pharmacist. Unfortunately the pharmacist is only legally allowed to sell a couple of packets to one person, so Jesse has to organise a whole host of ‘Smurfs’ (‘dudes’ prepared to go into loads of pharmacists) to go out and collect enough.

To bypass this obvious limitation, Walt suggests an alternative precursor which they have to steal from a lockup. They burn out the security lock using a thermite reaction and in a very humorous clip, reminiscent of a scene from Laurel and Hardy, they make away with a large drum. Afterward the local drug squad watch the CCTV footage and enjoy laughing at their antics – carrying the drum rather than rolling it along. In the programme Walt enthusiastically describes the basic chemistry of the thermite reaction to Jesse – something that doesn’t happen very often in a Hollywood film!

The thermite is a classic reduction–oxidation reaction. Iron oxide and aluminium powder are often used:

The further apart the two metals are in the electrochemical series, the faster and more furious the reaction. I won’t ever forget the explosion and ‘fallout’ that took place in our lab when my inspiring middle school science teacher heated a crucible of lead oxide and magnesium thermite powder!

The thermite reaction is not an explosive but the energetic reaction can produce very high localised temperatures that can be used for welding or ‘cutting’ through metals. The reaction with aluminium is particularly useful as it melts at relatively low temperatures so the reaction is easy to start. Aluminium also has a high boiling point and so the reaction can reach very high temperatures of around 2500°C and so be used to weld railway tracks together for example. The army use the reaction for a variety of on-the-spot applications. In the right quantities it is certainly capable of creating the sustained heat to melt a lock, although it could easily have set fire to the door and surroundings!