5
Breaking Bad IV – can a little crystal blow up a room?
Analysis

Breaking Bad IV – can a little crystal blow up a room? 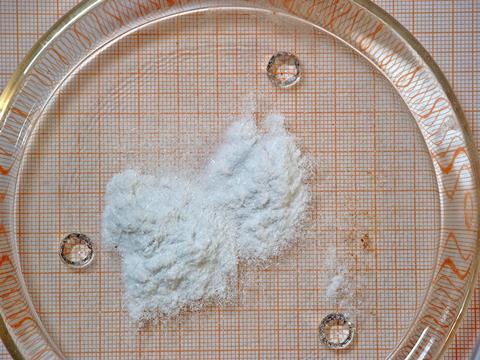 In Breaking Bad, Walt is a high school chemistry teacher turned criminal producing amphetamine (crystal meth) to sell on the black market. At one point his partner, Jesse, gets swindled and beaten up by a psychopathic gangster called Tuco. Walt confronts Tuco and offers him some more crystals but insists on being paid immediately. Tuco starts to get nasty … but Walt has a plan.

In anticipation of the negotiations not going to plan, Walt hasn’t actually given Tuco a bag of crystal meth but in fact crystals of ‘fulminate of mercury’ – a high explosive! He throws a crystal on the ground which detonates creating an almighty explosion. In the last scene, we see Walt walking victoriously from the smoking remains of Tuco’s office clutching a bag of money!

Could a small crystal of mercury fulminate really do so much damage? Mercury fulminate (or fulminate of mercury, as Walt rightly calls it) Hg(ONC)2 is a very unstable and explosive compound. Although first prepared back in 1800, because of its instability the crystal structure was only fully determined as recently as 2007. It is prepared by reacting mercury with nitric acid and then adding ethanol. The crystals are usually brown to grey (due to colloidal mercury) and large crystals are extremely unstable. Silver fulminate can also be prepared in a similar way but is too sensitive for commercial use, though some crackers and children’s toy caps (eg Fun Snaps) sometimes make use of it.

Pressure changes, vibrations and shock can lead to detonation. The explosive properties can be demonstrated in the lab by hitting a very small crystal (ca. < 1 mm3) with a hammer. Detonation produces mercury vapour, carbon monoxide and nitrogen.

One explosion pathway could be:

Walt’s crystals are transparent and 1000 times larger than the demonstration crystals mentioned above. If they could have been prepared at all without detonation they would have been very unstable to carry around but could indeed have created a very powerful explosion. Also, the shock wave would no doubt have detonated the other crystals in the bag on Tuco’s desk. I doubt there would have been such a great quantity of flames issuing from the explosion as you see in the film. Had Walt and Tuco survived the explosion, they would not have been able to hear for a long while!