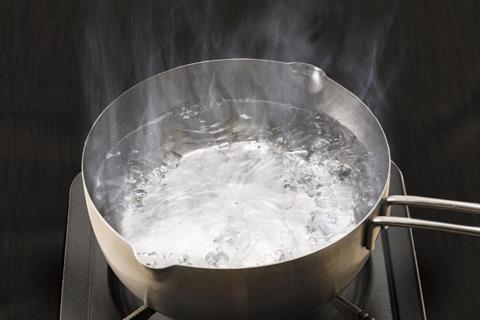 In Breaking Bad, Walter White, a down-on-his-luck high school chemistry teacher, finds out he has terminal cancer. His family is struggling to pay the bills so he decides to turn his chemistry creativity towards making illegal drugs. He joins up with Jesse, a local drug dealer, cooking up methamphetamine, known on the streets as ‘meth’ or ‘crystal meth’.

Almost at once things go badly wrong when two rival gangsters threaten to kill them. Bargaining for his life Walter takes them into the lab promising to show them how to make top-grade meth.

Thinking on his feet he starts the process but manages to contrive a reaction to produce poisonous gas to kill the gangsters. He heats up a pan of water and when it’s boiling throws in a bottle of red phosphorus. A shower of sparks causes enough confusion for White to escape outside where he holds the door shut trapping the two gangsters in the fumes and poisonous gases.

Later Walter explains to Jesse “red phosphorus in the presence of moisture and accelerated by heat yields phosphorus hydride … phosphine gas … one good whiff and …”.

It’s a clever way of getting out of a tight spot but is the chemistry correct?

Not all phosphorus is the same

Phosphine gas is reported to be a dangerous by-product in the illicit production of ‘meth’ so this may be where the idea came from in the programme.

As it’s definitely red phosphorus that Walter is using the chemistry is not looking too good. He did heat the pan over a camping gas stove and so the sparks could have been some of the phosphorus burning in the flame (red P burns above 260°C in air) but simply adding red phosphorus to a frying pan of steaming boiling water would not produce the clouds of phosphine gas we see in the programme.