How to teach controlled variable investigations at 11–14 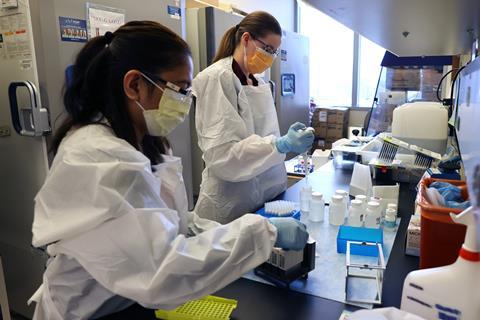 There has never been a better time to talk about controlled variable investigations. The recent introduction of a Covid-19 vaccine has put clinical trials in the press and at the forefront of everyone’s minds. When carrying out clinical trials, scientists need to determine the efficacy of new vaccines. A large part of this is by controlling the variables – such as participant age and gender, medical history, other current medications and even where they live.

Teaching independent investigations to 11–14-year-old students will help them become scientifically literate citizens and young scientists with a passion for the subject.

A wrong report for students to correct from the Education in Chemistry website: rsc.li/LINK

An investigation on dissolving sugar includes some deliberate mistakes, which students should identify and correct. Download the wrong report worksheet as MS Word or pdf and the answers as MS Word or pdf.

Ideas for the classroom

This may seem like an odd confession, but I miss coursework. Not the marking bit, obviously, but I miss students doing the coursework. It was their chance to be a real scientist for a short while, and our chance as teachers to fill them with a love of working in a lab.

Some courses, such as the previous Salters chemistry A-level, had students undertaking a week-long independent investigation in the laboratory. This was a joy to plan and supervise with students and it was excellent university preparation for them too. I started preparing students for this as soon as they started at my school.

Getting students to plan their controlled variable investigations takes a bit more time than giving them a ready-made practical. It also requires the teacher to train students in how to plan a practical, as well as high levels of teacher and technician patience. You may end up running a session with several different variations of the same experiment going on – but it is worth it.

Take the investigation into how sugar dissolves. This is a relatively safe practical to do, so having lots of different variations at the same time shouldn’t cause too much of a headache. Start by posing the question ‘How long does it take for sugar to dissolve?’ Ask your students to discuss what we can measure and what we can change. Some students may need some support to get them going. I like to use the students’ own words, and then introduce the appropriate technical vocabulary later.

Asking a class of 11-year-olds to list all the control variables might seem like a tricky concept. But by starting them thinking of everything that could be changed, they are developing their concept of control variables naturally.

I love giving my students the chance to develop their own methodology. One group might measure the time to dissolve or the effect of stirring. Another group might look at how much they can dissolve based on changing the type of sugar. Trust me, the classroom never looks as chaotic as this might sound. 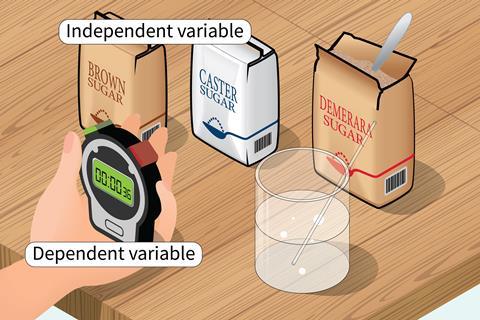 Discuss with your students how all the other variables in the ‘We can change…’ column then become the control variables. Ask them to plan how they will control each of these variables. The lower years may just be able to describe this in basic terms, for example ‘we need to keep the amount of sugar the same.’ Help them to improve their planning by modelling more sophisticated explanations such as ‘we will use 5 g of sugar in each experiment, measured on a mass balance.’ As your students grow in their knowledge, they can expand their thinking and give explanations of why controlling variables is important. For example: ‘the temperature of the water should be controlled, because an increase in temperature may affect the rate of the dissolution.’

This can all take a little longer than just giving them an instruction sheet, but they will learn a lot more. I use one lesson to plan, followed by homework for them to write up. I then collect it in the next lesson, check their work for a sensible method, and then allow them to experiment in the third lesson.

Students will need to understand the difference between repeatability and reproducibility. Emphasise that always taking care to control variables will lead to reproducible experiments (they can be replicated by a different group giving similar results) and repeatable experiments (when repeated by the same group, the results will be similar). Point out to students who do not take care of controlling their variables that their results will be inaccurate and that no valid conclusion can be drawn. 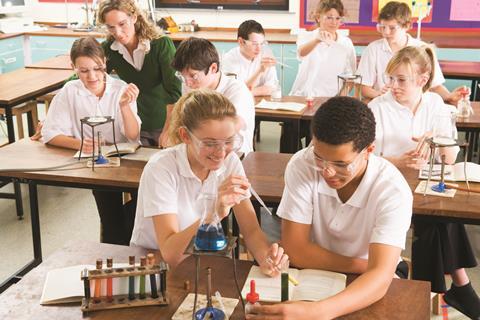 While I mourn the passing of coursework, I don’t necessarily miss the marking. However, written practical reports are a useful way of having students show they really understand the differences between the variables, the importance of controls and the need to be explicit in how they are controlled. Think carefully about how many of these you ask them to write. A small number of reports per year that you can give high-quality feedback on will have much more impact than lots of reports you don’t have time to mark properly.

You can also make use of ‘wrong reports’, where a ‘student’ has made some mistakes in their planning or write up. Ask your students to identify the errors and write corrections to the work. An example activity on dissolving sugar is available in the downloads.

Students will have many opportunities to carry out controlled investigations during their next stage of education. Use the terminology of ‘independent’, ‘dependent’ and ‘control’ often, including when you are carrying out demonstrations. This will help them appreciate that these variables aren’t just something they have to contend with in their practical work. The variables are a fundamental part of how science works.